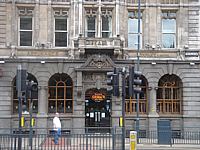 4/5  rDev 0%
vibe: 4 | quality: 4 | service: 4 | selection: 4
After a few beers in the classic Grove Inn, our party of three [myself and the two Rays] headed back into the City Centre of Leeds to try some of the more modern day Bars.

The Baroque is one the newest additions to the Bar scene in Leeds, it only opened in December 2004. Situated on the Headrow and almost opposite the Town Hall, the Baroque is actually owned by Okells Brewery, who are based on the Isle of Man, so this venture is quite far from home.

The exterior is unaltered and only a small oval neon sign hangs above the entrance to indicate the identity of this new Bar. Inside, the interior has been sympathetically furnished. The bar is to your left as you enter. A long wooden bar is fitted with Handpumps and several banks of chrome taps. Behind the bar, large tall wooden cabinets line the back wall, and they are all filled with bottles of beer and wine, lending an impressive appearance to the Bar area. There are several elevations to the Baroque, to the right a wide staircase takes you to an internal raised floor that runs over the bar and makes for a great place to sit and people watch. The high ceilings, creaky floors, heavy dark wood decorations & old style fittings lend the whole interior a feeling of being in an old Victorian Apothecary.

Beer range is impressive. Starting with the Real Ales; there are always four regular Okells Beers, three of which are permanent fixtures; Okells Bitter (3.7%), Okells Maclir (4.4%) and Doctor Okells IPA (4.5%). The fourth Okells beer is a rotating Okells Seasonal brew. In addition there are regular Guest Beers available, during my visit Northern Soul Master, Hopback Entire Stout and Fullers ESB. In addition to the nice range of Traditional Cask Ales, the Baroque prides itself on having a decent bottled beer range from around the World. The World Beers Selection is equally varied. Draught beers are from Belgium: Liefmans Framboise and Lucifer, Germany: Erdinger Pils and Gaffel Kölsch, Holland: Amstel and even the USA: Sierra Nevada Pale Ale.the latter may seem common but it may well be the first time it has been on sale in the draft format in Leeds. Belgium Bottles are Chimay Red, Blue and White, Westmalle Dubbel, Affligem Blond, Karmeliet Tripel, Deliriums Tremens, Vondel, Boon Gueuze with Timmermans Cassis & Pêche. Czech Bottles are Budvar and Herold Bohemian Dark. Germany is well represented with Paulaner Weiss, Erdinger Dunkel Weiss and Gaffel Kölsch. Other bottles noted were La Trappe Quadruple from Holland, Singha from Thailand and Sierra Nevada Pale Ale & Celebration from the USA.

The food menu is equally diverse and cosmopolitan, with dishes from around the World also, I didnt try any food but it seems like lunchtimes in here get busy.

Service was exceptionally friendly, and during a quiet period, the young lady that had served us earlier, joined us to share some background information to the Northern Soul Master beer that none of us had heard of before, a nice touch. The two Rays and I enjoyed a few Pints in here, all from Cask of course; the Doctor Okells IPA and Northern Soul Master were tasty brews and the environment relaxing, though I imagine with its location this place buzzes during weekday lunchtimes and early evenings after the Offices close.

A welcome addition to the City of Leeds and a nice surprise to see a regular outlet for Okells beers on the UK Mainland.