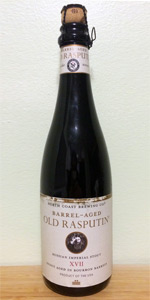 Notes: Every year we age a special batch of our much-loved Russian Imperial Stout in Bourbon barrels. The depth, intensity, and complexity of the flavor profile of this special release, like its predecessors, make it a worthy tribute to Old Rasputin.

Poured into a Duvel glass.

A: Pours a light consuming black hole dark with a 2 finger tumbleweed head that stayed around long enough to make itself comfy.

S: Bourbon barrel up front with notes of chocolate, vanilla and faint alcohol.

O: Once again, North Coast has nailed it. Doesn't get the notoriety or hype of some other hard to find BA stouts like KBS or BCBS, but definitely ranks in that top tier. It is expensive, but definitely worth the purchase. Very special.

Too smooth...too drinkable...too flavorful...too pricey...whatever. This is a DAM FINE representation of the RIBA style. Look forward to xviii and an aged xvii. Cheers! (4.52)

2.5 years later...wicked hot...thin...I've had many more great stouts since this.

Metallic and wet paper notes initially came through strong in the nose. Very irony. Quite odd. I was predicting that this beer might be infected. There were subtle roasty and boozy notes in the background. A touch of brown sugar appeared as the beer sat. With time, the nose improved dramatically. The brown sugar notes intensified and dark chocolate also came through. Loads of bourbon appeared as well but surprisingly not a lot of booziness. Fragrant vanilla notes were present. The aroma literally started as a "1" but became a "4+" by the drink's end. Both the bourbon and vanilla continued to intensify as the beer warmed.

The flavor profile was definitely better than the nose initially, but it was far from spectacular. Intense roasty, almost char-like notes dominated, along with an intense booziness. Ashy notes lingered in the finish, which was followed by an overwhelming boozy sting. I recall other vintages of this beer being very hot, and this release was no different. With time, some brown sugar sweetness came forth. Bit of vanilla too. The overall flavor profile eventually became much better. Roasted malts, brown sugar, vanilla and bourbon all intensified as the beer sat. Bit of espresso in the center. The boozy notes also mellowed out.

The mouthfeel was really frothy and creamy but lighter bodied for the style. Almost a bit watery. Slick and smooth on the palate. The barrel really seemed to thin out the liquid.

Every year, I spend $25 on a bottle of Barrel-Aged Old Rasputin thinking that it will be better than last year's vintage, but this is never the case. While XVII improved dramatically as it warmed, it was still overly roasty and boozy, and quite thin in both flavor and mouthfeel. From now on, I need to stop making the mistake of buying this beer.

Thanks Steve a lot lot lot for sharing four vintages of this. Interesting to see XII and then a bit later this.

A- Super black bodied like the last few vintages with the tan, foamy cap. Good retention on this one as a thick creamy ring and island remain. Massive, thick lace blankets with plenty of patches around them.

S- Maybe the most balanced aroma out of the series and it truly strikes a chord. Rich chocolate malts and fudgey sweets blended with roast, toasted oak and vanilla whiskey notes. No harshness here.

T- As with the aroma, a balance is struck between the strong elements here. Heavily roasted grains (more than the other vintages), chocolate, cherry dark fruits, vanilla bean degraded oak, toasty wood, caramel and Bourbon whiskey.

MF- Body has been very consistent. Thick, oily with a foamy and somewhat creamy body. Carbonation is at a moderate level and it finishes just a bit warm. Slick.

Even being the freshest vintage this finds a great balance between barrel and stout with a decent heat on the back end; but not too much. This XVII is a special one.

Poured from 500mL corked & caged bottle into a tulip.

Smell: roasty but not acrid; sweet with dark fruits: cherry, date, raisin, tobacco. Definitely a hit of alcohol in the works, but it adds to the experience. Oak and vanilla are definitely present, but not overbearing. Extremely well balanced and very enticing.

Taste: rich, dark fruits with a bit of a harder edge than the aroma. The barrel and the alcohol are both a bit stronger here, but the overall flavor profile is similar to the smell. Still, a delicious beer.

Mouthfeel: medium-rich body with a good carbonation and a great creaminess. Wonderful.

Overall: I like this beer a great deal, although it's got a rougher finish and a bit of a hard edge to it compared to other BA imperial stouts I've had.

The beer pours a nice and vigorous foamy chocolate brown head that takes a long while to dissipate. The beer itself is an opaque black. Although, the beer has a slick and creamy looking texture.

The beer smell has a nice combination of barrel and style notes. The main barrel notes is the vanilla with only a tiny hint of the barrel coming through the other notes. Despite being aged in a barrel, the beer style notes aren't entirely overwhelmed by the vanilla. The style notes are roasted malt, chocolate, and cocoa notes from the non-aged variation. The smell even has a bit of a hoppy note too! Overall, the smell is pretty nice, which becomes better and more complex as it warms.

The beer taste contains similar notes found in the smell. The vanilla notes are a bit more muted and the style notes, especially the chocolate, dominate the plate. Additionally, the bourbon makes its presence known, making it one of the three notes that have the stronger presence. In fact, the taste is pretty sweet when combining the three strong notes.

The mouthfeel is pretty smooth and lightly carbonated. The beer goes down pretty slick and actually feels a little bit thin for an aged RIS. However, the beer still feels pretty good.

Overall, a fantastic beer and worth the price. The beer is definitely different from its harsher nd more bitter non-aged relation. If you see this on the shelf, get it.

Poured from a 500ml bottle into a snifter.

T - Huge chocolate character hits right up front, developing into a web of complex, sweet dark malt flavors, from toffee to maple. Booziness rolls in from the mid-palate, finishing with a bit of alcoholic warmth to sweeten the malt profile even more.

Are you kidding me, $23 bucks for a beer! And it's only 16.9 oz! Well let me tell you that was the best $23 bucks I've spent for a wine or beer ever!
You just aren't ready for the tsunami that hits your palate with the first sip. Just drink it slow and wait till next year for another one. Amazing!

Reminds me of Abyss which I didn't care for. This beer is pretty smooth, not much alcohol detected. However, it tastes like charred wood. If you've had a lot of world class stouts this one is not going to impress.

EASILY the best BA stout i've ever drank. Think it had a few years on it as it was in the back of the store's cellar area with wine bottles and was a bit dusty.

Gave it to a friend as a housewarming gift, and he shared about 4-6 oz with me.

Gorgeous black beer with a deep, brown head that had perfect carbonation. Beer had tremendous legs and looked oily in the glass.

smelled like boozy, vanilla and malt, and a tobacco and chocolate. Oh my god i was freaking out that i gave this beer away.

Taste was even better. Boozy, caramel, barrel character and chocolate that smoothly transitioned into a malty vanilla finish...

This beer was outstanding.

Three years in the cellar would do wonders