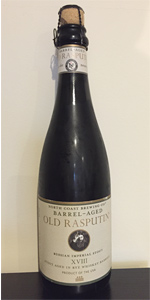 Look: Pours a little thin-looking. Dark, translucent brown, but not the thick, opaque black, viscous-looking pour of something like last week's Westbrook Mexican Cake. It also looks rather fizzy, almost overcarbonated, but it does have dense legs and lacing when I tilt it, and the quarter-inch layer of foam sticks around a long time. 4.0

Smell: It's not multifaceted, but what it does, it does so well. The smell is tons of dense, rich chocolate with plenty of whiskey and a nice background of spiciness from the rye. 4.25

Taste: The chocolate from the smell still comes through in the flavor, but it has more competition. There is an earthiness from the rye and from the hops. It's spicier than I expected from the rich, decadent smell. I find the base Old Raspy to be rather bitter, so maybe I shouldn't be too surprised, but I am a little disappointed. 4.0

Mouthfeel: Unfortunately, the mouthfeel is a letdown. It's thin and fizzy, like a Winn Dixie generic-brand cola. It's not *bad*, but for an expensive barrel-aged stout, there should be a lot more body and density. 3.75

Overall: It's a solid beer and a nice dessert treat. I wanted to open this bottle while the rye-barrel-aged Abyss was still fresh in my memory. The Rye Abyss, which is also a little bit on thin side, is still clearly on a higher tier. Rye-BA Old Raspy hints at the delicious, chocolatey decadence that is possible while not quite achieving it. 4.0

Barrel aged? Where? Rye character is mild at best. Makes me sad. North Coast used to impress me with there BA offerings. What happened? Hope my rating is off for everyone else who bought this. It's OK. For a limited $20+ beer... In a word: Disappointing. Had with some age and did improve. Up rated to 4 from 3.75.

As one of the most anticipated annual releases on the beer calendar, the North Coast brewer reward their fans with two variations: a wheat barrel-aged release and this rye-barrel option that carries a spicier, nuttier and sharper balance to its massive stout within.

Devishly dark, the espresso-black beer pours while swirling a mocha froth patiently about. One pass of the nose highlights the stouts decadent chocolate, dark-roast coffee and charming bourbon array of aromatics. And as its flavors creep onto the tongue, the tastebuds are quickly seduced by the beer's cake-like batter sweetness.

Perhaps the epitome of decadence happens as the stout slathers across the middle palate- saturating fully with lavish brownie, bittersweet chocolate, sweet toffee and caramel, earthy walnut, and the robust espresso roasty threads that tie all the tastes together. The stout's bitterness disguises as coffee and cocoa while the spicy grit from the rye barrel offers its own peppery bite and soiled finish.

Full and playfully chewy, the stout finishes with the culmination of bourbon-ball dessert candies as its caramel and vanilla tighten around its boozy warmth and its weathered oak spices. Lingering with chocolate and bourbon, the beer's sipping demeanor easily replaces dessert as an dinner closer.

500 ml bottle poured into a tulip

A: Pours black with a tan colored, creamy head, lots of tiny bubbles in the head, pretty carbonated, decent amount of lacing, head dissipated after a few minutes.

A: Rye comes through pretty strong, spice, dark fruits, chocolate, oak, picking up some heat, has some complexity and depth, smells pretty good.

T: Hint of rye and spice up front, espresso, and dark chocolate, has a good amount of espresso bitterness, big dry finish, get some spice, nuttiness, walnuts, the rye adds a nice bite of flavor to it, very good.

O: Did not like this at first but as the beer warms the rye comes through and is noticeable throughout the beer. The rye adds a nice bite in flavor, the base beer comes through with dark fruits, dark chocolate, and a mellowed hop presence. I enjoyed this, probably won’t pick up another bottle. I do prefer Old Rasputin in bourbon barrels but this is different and enjoyable.

A- Opens well and pours a huge 3" high thick rich looking foamy head that lasts forever and a day before film out. Super dark brown colour

T- Whisky note prevail. Roasted malt and some bittering hops make an excellent base and super rich. Bitter at the end though. Nice chocolate and coffee in the background. Very well blended brew

M- Creamy going down then dries out well

O- Nice brew. Worth trying once. Would like to try their bourbon barrel aged stouts one day as this one is pretty good.

As always barrel aged stouts can be tough to pair and this one is no different. This nice little brew went well with........ Jerk chicken! The spicy nature of the jerk will hit you then let this brew take it away

Poured from a 16.9 oz bottle at Ron's Corner Tavern.

Poured into a snifter at cellar temperature.
L - Poured a very dark brown, almost black color. The tan, two finger head dissipated slowly leaving a long lasting lacing.
S - Lots of roasted malt, some hops and a little bit of whisky on the finish.
T - The taste is similar to the nose with a bitter coffee finish.
F - Very full bodied and smooth with medium carbonation.
O - Tastes pretty much like regular Old Rasputin with a little kick. Too much roast and not enough barrel. Not worth the extra cost.