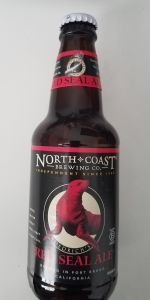 Malt and hops are beautifully married in this full-bodied, copper-red Pale Ale. Red Seal is generously hopped for a long, spicy finish. An excellent accompaniment to grilled meats and rich sauces.

A: pours a clear reddish copper with streams and streams of carbonation. One finger thick, foamy beige head. Rings of lacing as I drink it down.

S: sweet and citrusy. Candied orange. Sugary malt. Smells like the Three Frogs I had a few weeks ago, or like the Sam Smith’s IPA. What they have in common is that they were all old hoppy beers around 45 IBUs. Classic APA aroma.

T: tastes shockingly like those two aforementioned. Moderately sweet, citrus, malt, floral arrival. Toasted caramel malt and cascade hop flowers on the middle. A crisp, clean finish with a faint hint of lingering hop. I’ll bet this has more citrus “pop” when fresh. Alas, it was between a six pack at five months old, or a single of unknown age (which turned out to be 10 months). Lacks the darkness or dankness that GL Burning River brings to the table.

O: this, even more than Sam Adams Boston Ale, GL Burning River, or Wolf’s Ridge Ridge Trail typifies the ubiquitous pale ales of the late 90s. It is a style that takes me back, and reminds me of many happy pints with friends. It is a beautifully executed example, and a shame beers like this have lost so much popularity. I hope it won’t continue to be so hard to find, and would gladly buy a six pack, as it clearly holds up to age fairly well.

Typical red ale here. Not bad, not great. Poured out to a darker amber color, with hints of redness when held to the light. A touch of lace around the glass was noted, otherwise lower carbonation. Scent of barley and hops were present, as was a touch of yeast. Taste is good, but a bit on the blah side. Bitterness of hops and malt are detected, but a strange pine like quality is also noted. Finished rather clean and crisp, with a bread like aftertaste. Worth a try.

A- Pours amber with a reddish hue, the head was nice and left small lacing.

S - Citrus hops and pine as well, I detect a slight grainy smell as well.

T - Mostly citrus hops but you can taste a slight malt backbone. Bitter hops is what shines through though.

M - Lots of carbonation, packed into this medium body brew.

D - This one is a medium drinker, I couldn't do a whole six pack, but I may do two or three if the timing was right.

Thoughts- This is a hoppy red ale.

I had this on tap at the Flying Saucer in Memphis. The beer was a nice dark copper with a decent fluffy head and decent lacing.

The aroma was of hops (cascade??) and lot of citrus/pine. Just a whiff of biscuits.

The taste was rock solid. Initial astringent hop bite with more than a bit of grapefruit in the background. The beer had some very subtle floral/fruit flavors as well. The malt packs just enough punch to keep balance, just a little sweetness 2/3rd through the beer reminds you its there.

This beer poured an orange/brownish color with a thick, rocky, retentive head. The aroma is malty and caramel with hops noticeable in the background. The taste is malty with a nice hop bitterness. The mouthfeel is medium bodied and suits the beer well. Overall, this is well balanced pale ale with the bitterness noticeable, but not overpowering  definitely worth trying if you like a hop flavor that isnt overpowering.

Served in straight pint glass. Poured a clean, clear coppery amber color with over an inch of off-white head that had good retention and lacing.

The aroma was a nice blend of malty notes with a hint of hoppiness at the end. The flavors were pretty similar with the hops having a more noticeable presence on the tongue.

The body was good, full and smooth. Drinkability was very good, this is a day long partner of a brew. It's been a while since I've had one of these beauties, and Ill try not to let it be so long again.

Poured from a 12 oz. bottle into a clear pint glass. No freshness date apparent. Single purchased at specialty beer store for $1.69.

A-Pours a light golden amber with a two finger, off-white head with good retention and modest lacing. Color is a bit light for an Amber/Red Ale.

S-Citric hops dominate the nose. Smells more like an APA.

T-Moderately hoppy but, lacking the sweet malt backbone that typifies the style.

D-mediocre Amber ale at best. But an exceedingly good APA. That is what I thought I was drinking from the label. It was not until I saw the brewer's website and the style classification on this site. I liked this beer. A lot. But, it is not a very good Amber. Not dark enough and not enough malt presence in the aroma or the taste. If an APA, I would rate it 4.25 overall.

Pours a clear golden copper color with a thinnish beige head that leaves good lacing. West coast hops and biscuity, crystal malt in the nose. Tastes malty sweet with a hint of tea with the floral hop pungency showing up near the finish. Definitely not overwhelming; good balance to it. I always thought Red Seal was an IPA, but I guess it's a pale. Too thin to be an IPA in by assessment. Nonetheless, a quality beer that I"ve enjoyed for years. Now if we could only get more Old Stock ale sent to my neck of the woods...

Good Pale Ale. Pours a clear light amber color with a big white frothy head. Leaves some lacing on the glass. Aroma is sweet malt/caramel malt with a little citrusy hops. Flavor is more of the same but the hops and bitterness are more present than in the nose. Starts out a malty beer but the West Coast citrus hops kick in to provide a nice balance. Mouthfeel is crisp, with some sweetness and bitterness balancing things out very nicely. A good go-to Red/Amber Ale.

A: copper gold color, a bit hazy, fizzy head that looks better as it subsides.

S: nice caramel maltiness and hoppy freshness in the nose.

T: a good full tasting pale ale, I would personally describe it as an IPA, but it's not mine. good hop flavor and bitterness without astringency. balance with the caramel is well done.

D: drinkable beer for it's strength and full flavors

Nice example of a craft pale ale. I will drink more of this.

Big fluffy and sandy white head on top of an amber beer with nice notes of red in it. Nice lacing. Light aroma of citrusy hops and orange rind. Not spectacular, but pleasant.

Citrus and piney hops are most present in the taste. Both combine into a very strong hop character for this beer, with a nice balanced bitterness that would satisfy any hop head. Lemon and orange rind come to mind as well, especially in the dry mouthfeel. Its creamy and dry at the same time, making for an interesting feel. All around its not necessarily balanced due to the bitterness of the hops, but it is very delicious. The hops are definitely potent all the way through and really combine nicely to form a very solid pale ale.