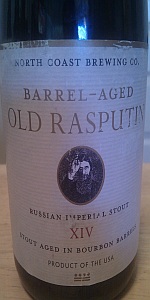 8.5 years old is tough to overcome. Nice flavor, well-disguised abv, aroma is a bit diminished, but mouthfeel is gone. Still drinkable, though. Sorry I let it get to the back of the cabinet.

500ml bottle poured into a goblet

S: Smells great - bourbon is certainly the strongest aroma, but not by much. Roastiness is close behind the bourbon with a good mix of dark and milk chocolate. Light floral happiness in the background. Very complex.

T: Wonderful. I'm not sure where to start as everything blends so well. Dark chocolate is probably the strongest flavor. Caramel and bourbon sweetness is also there with a good amount of roastiness. This is still fairly boozy, but not overly hot.

O: This is a very well balanced and delicious barrel aged imperial stout. The sweetness from the bourbon mixes very well with the dark chocolate and roastiness from the Old Rasputin. It is certainly a little boozy, but this will be amazing in a year. Fresh it's still one of my favorites.

Picked this one up some time ago on a whim, finally getting around to drinking it. Tasted 22 February 2013.

Pours black, thick, and sludgy. One finger of medium-tan head, good retention, nice lacing. Solid, and just what I look for from an imperial stout.

Smell is bourbony and stouty, in equal parts, but they clash more than they blend. It's surprisingly thin on the nose, even after warming up. Chocolate, a grainy whiskey presence, but not much else. Edit: as it warmed up to room temp, the smell got better integrated, smoother, warmer. I'm liking it more now, though that doesn't make a huge difference to the beer as a whole.

Taste is an unbalanced, unintegrated blend of stout and whiskey. I don't know why, but the barrel and the beer just aren't working together in this. It's one of the more uneven barrel-aged stouts I've encountered. It's not over- or under-poweringly whiskey-flavored, but these two pieces just don't fit. Slightly charred, fading to bitter. Roasty, with chocolate as the dominant stout component. Whiskey brings little here - leather and a bit of burn. Meh.

Mouthfeel is good, but a bit overcarbonated. Heavy-bodied and thick, as it should be, but it surges up with carbonation that doesn't feel right for an imperial stout.

I found this to be a poorly integrated barrel-aged stout. Rough around the edges, and not in a good way. Sure, this version is gone from shelves, but this certainly doesn't make me want to throw down the money for another bottle of barrel-aged Rasputin. I actually like the base beer a lot better than I like this.

Appearance: black bodied beer with a medium brown head. Easily 3 of fingers worth of head. Thick head with lots of large and small bubbles. Thick lacing on the glass.

Smell: great barrel notes mostly of vanilla and oak. This beer also smells really chocolately and has some roasty notes.

Taste: Chocolate and bourbon right away. The chocolate notes taste like a gourmet chocolate that has been liquified. Vanilla is strong at about mid palate and finishes fairly strong as well. Bourbon in this beer is there from start to finish and it just sits in the background and accentuates all the stout notes. Not at all boozey bourbon flavor and it really balances well with everything in the beer. Wow!

Mouthfeel: Medium bodied with a carbonation that is at the low end of medium. Super smooth and mellow. This is a bourbon barrel stout milkshake. Easy drinking, but you continue to want to sip this and really appreciate the fine beer this is.

Overall: This is the second Old Raspy Anniversary beer I have drank. This beer is just a good fresh as it is aged. North Coast this is the best beer you make. At 22 bucks a bottle the price is steep, but its totally worth it. My only problem is why does this brewery base beer is easy to come by and at a great price point, but the barrel aged version is soo steep? Still worth seeking it out!

This is my 300th review on Beeradvocate.com (yay!). For what I paid for this beer ($23), I have earned the privilege of being super-critical. The pour was very, very black. No light gets through, save for a little just at the surface. There was a big, light brown head initially, but it dissipated quickly. On the nose, I'm getting some vanilla, a faint trace of oak, some nondescript sweet notes (like marshmallow), more than a trace of booze, and not a lot of roastiness.

This beer has a full body and a good, firm mouthfeel, though not as creamy as I expected. Truth be told, it feels thinner than the standard Old Rasputin. On the front of the palate, there is a big rush of sweet graham cracker-like flavors. The flavors develop as some whiskey notes come through along with some dark fruit notes of raisins, cherries, and plums. The nice vanilla notes that should come with the bourbon are missing and are replaced by the fruit, which seems somewhat intrusive and off-kilter. There's a big warming alcohol note on the finish, but the fruit lingers too in a slightly unpleasant way. Old Rasputin is known as being a bit ``rummy'', but the bourbon barrel aging brings on this cherry component that I do not like.

I wanted to give this beer higher marks, but I could not. It was a good beer. Tasty, complex, and robust. Unfortunately, for what one pays for this, I think it's fair to expect a GREAT beer and this was nowhere near ``great''. Therefore, I have to downgrade it substantially based on poor value alone. I think very highly of Old Rasputin, but I honestly prefer the rummy, toffee-like notes of the original to this version. I do wish I had decided to drink this fresh.

500 mL bottle poured entirely into my CBS snifter (I love this thing).

Appearance - Black, but not inky black. Looks like it's going to overflow my glass as I pour it, but it just fits. Huge mocha head. Sticks to the glass. Rivals Zhukov in appearance, but Zhukov's head is darker in color and therefore awesomer.

Smell - Barrel. but not overly barreled. Bourbon is light, but more prominent than the oak and vanilla. Roasty chocolate and a definitive hop presence. Definitely Old 'Putin behind the barrel.

Taste - Barrel, like the smell, but not too much. Nice flavor that doesn't overpower the stout. Lots of chocolate and coffee roast coming through. The hops are subdued in this one, but still present. The finish is a touch bitter.

Mouthfeel - So the hops are less intense, which I enjoy, but the beer seems thinner than regular Old 'Putin. Too thin, really. The finish seems to drop off leaving very little of the residual flavors on the palate.

Overall - It's just as good as regular Old Rasputin, with some benefits and flaws. Less hops, which I like, but less body, which I don't like. I don't really know how that happens in the barrel.