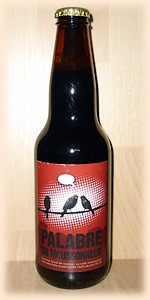 Bottle: Poured dark black color stout with a medium size dark brown foamy head with OK retention and minor lacing. Aroma of dominant coffee notes with light floral touch with some deep roasted malt notes. Taste has a bunch of very extreme notes which may be due to the ice-freezing process with some clear coffee notes and some roasted malt. Body is lighter than expected with some medium carbonation and alcohol is not very apparent. Flavours are very cut and dry and somewhat hard to describe. Interesting beer but not sure I would feel need to revisit.

Poured from a 340ml bottle into a stemmed snifter.

Pours dark, dark brown with a black center and a tall, thin, fuzzy head that falls quickly leaving no lace and hints at over-carbonation. The nose is quite nice though which starts righting the ship. It has the standard profile of deep roasted malt and lots of coffee. Unfortunately, it is downhill from here. The taste is overwhelmed by an incredible lack of body and there is almost no finish to this beer at all. It drinks like a sessionable stout at 4% and is way off the mark for 13.6%. A massive disappoint especially given its price tag.

I never mention bitterness in my reviews, my bitterness taste buds are ridiculously under-
sensitive.

APPEARANCE : Typical Imperial stout look, but with a head which rises higher and falls back down faster than usual. Body is pitch black and head is mocha.

SMELL : First nose is heavily roasted malt and some hoppy herbs, but sort of quiet, not excessively expressive. Second nose opens up a caramel and coffee profile, hinting at some roundness to the mouthfeel. Third nose is full on coffee bean with a weird twist on them - which I'm assuming is the sea-water influence on this brew.

TASTE : Well this brew is actually salty to a point. I guess they really weren't joking with their coffee beans soaked in sea water. Coffee is obvious, so is burnt malt and heavy caramel malt. The taste has an air of burnt caramel which I haven't tasted this clearly in any other brew, so cheers for bringing this particular taste out, but I still find that it would fit a heavy brown ale better than an imperial stout. Like something out of a belgian quadrupel.

MOUTHFEEL : One of the most carbonated imperial stouts I've ever had - and that's no compliment, seriously. In my books, imperial stouts are supposed to be thick, almost flat and bordering on oily. This has nothing of those attributes. The roundness hinted at by the nose is nowhere to be found.

OVERALL : What I said about the mouthfeel : it's not bad because of it, but it certainly won't satisfy anyone craving for something like a real imperial stout. Take "imperial" out of the branding and it'd be this much more honest about the beer in the bottle - which, again, is definitely far from bad, pretty freaking good actually. Just no imperial stout as I understand the style.