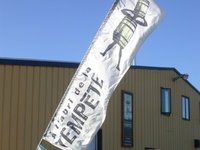 The brewery, located on the main floor and the pub, on the second floor, are in a converted fish processing plant. Owner/brewer Jean-Sébastien Bernier has done a fabulous job converting this plain building into a warm, welcoming and incredibly unique place to enjoy a pint. It is the first, and currently the only, microbrewery on the Islands, and relies on fresh, local ingredients for production.

While much of the conversation and facts may have been lost in translation (the primary language is French with an Acadian flair, so there was a strong barrier for us), I believe that Jean-Sébastien not only created all of the lovely beer recipes, but also created the beautiful woodwork and unique tap system, made of plumbing fixtures, used to dispense his beers. The pub is multi-leveled with a 15-ish seat U shaped bar. Lots of warm wood surrounds you and a vast array of beer bottles, most of which Jean-Sébastien has consumed, adorn the walls. Behind the bar two large picture windows let in tons of light and allow you to look out onto the bucolic island scenery.

During our stay on the island the pub had four beers on tap and one bottled only offering. Normally six is my baseline for a 3 (average) rating. With L'abri I am giving special compensation due to the remoteness of the islands and the fact they are growing most, if not all, of their own barley used to produce their brews!

Écume Bière des Îles - Beer of the Islands - a light lager available in bottles as well as on tap.

Le Vieux Couvent- a blonde made with spices and herbs; light and refreshing on those hot island days, when they have them!

La Grave- described at the brewery as a "noire," but I've seen it listed as a milk stout and would agree with that; a thin stout, but still held up to chocolate cake!

Corne de Brume - Scotch Ale (bottled only); this was absolutely our favorite - dark ruby red and malty - best served just below room temperature. We particularly enjoyed it along with a small bowl of smoked herring.

Now, when I say tasted, I really mean we had many pints at À l'Abri de la Tempête over the course of our week-long visit. They sell a handled mason jar with their logo, which can be used for "take-out" (they don't fill growlers, but these mason jars come with lids, so we were able to take a jar of beer each with us for our daily picnic on the beach.) Also, each time we brought our jar in empty, we got $1 off our fills.

The people who worked there were all great, but we were particularly fond of Majorie as she gave us great advice about our visit, insight to life on the Islands and was an absolutely delightful and interesting person.

In typical Magdalene Island fashion, the menu included all foods from the islands. Locally produced cheese, smoked herring, seal and seasonal vegetables, fruits and flowers could be among the things found on a snack plate. The food offerings are enough to keep you satisfied and with everything being so fresh and local it was a nice addition to the beers.

Well, obviously, I could go on, but À l'Abri de la Tempête really is a place you need to discover for yourself. We visited the pub at least once every day during our week long stay.

A piece of advice: If you visit this brewpub, don't go on as part of a tour bus, and if you can avoid it, don't go when a tour bus is visiting. We found the evenings to be particularly enjoyable.