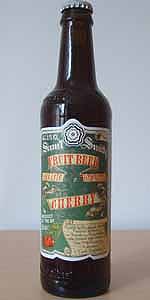 Flavor is like cherry cough drops. Very medicinal both on the front and back end. In the middle I get only a dash of fresh cherry, followed by mineral water, and the 0 calorie lemon-lime sparkling water. It's both very artificial tasting and medicinal.

Feel is pretty good - it's got the right amount of carbonation, and a nice fruity stickiness to it that adheres to the gums and teeth.

Overall, this is probably the worst Sam Smith fruit beer and not worth its price tag.

Poured a ver red, dark brown with a tight frothy red-tinted head. Leaves a fine film down to the last drop. Lots of lacing. Very nice.

Lots and lots of cherry on the nose with a malty nuttiness coming through. Nice.

Extremely smooth and creamy, lots of cherry some malts, low bitterness. Sweet but drying. Perfect for me Lovely!

Absolutely lovely beer - I could drink this all day. I checked the website and apparently this is made with real cherries!

O – The nose is artificial in an awful way, but the flavors are fantastic.

Paired well with an earthy double cream and an 12 mo aged gouda. A blue cheese was a little too big for it.

This is a very cool looking beer in a glass. nice foamy head.. Smooth going down. but im a cherry freak. so i think it needs a little more cherry than beer part. But over all if your looking for real cherry and real sweet beer. this is your ticket to good times. Youll love the light red foam head on it. thats a very cool effect.

A - Pours a bright cherry red color with a thin white head. Pleasant to the eye.

T - Tastes like a Tootsie Pop, but not so overwhelming; malt and citric flavors are present and quite pleasant.

M - Pleasant carbonation and tartness; you could drink a whole four pack of these and still want some more thanks to the little ABV it has.

Overall, a good fruit beer, tastier than other fruit beers I've had, but still not on the top of my list; would definitely recommend it, and search similar beers because Samuel Smith does not disappoint.

T: cherry biscuit up front but become much more cherry dominated in the middle and then it ends with cherry pie

O; cherry is very big but does not completely dominate the malt

Poured out of the pretty tall bottle that Samuel Smith uses for all the beers. Some head.

Its pinkish, but it was hard to tell because the bar had fairly bad lighting. It smells like delicious cherries, which was surprising because usually I hate anything cherry flavored, and other cherry wheat beers I've had before didn't taste good.

This beer tastes very strongly of cherries and sweetness, its definitely not a "beery" beer. Luckily for me I love sweets, so I thought it was very tasty. On the other hand, my boyfriend did not like it as much, as he thought it was much too sweet. Oh well! More for me.

One thing to note is that its quite carbonated! aka, you'll burp a lot. Also, I don' t think I could have had more than the 1/2 of the 22oz. bottle. Its far too sweet to drink a lot of. However, its overall a tasty fruit beer that I would definitely get again when in the mood.