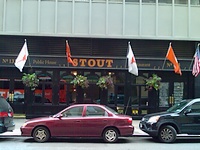 Notes: Stout NYC features cobblestone floors, stone walls and a sweeping, high-ceiling that feels like a fortress. Thanks to a personable staff and cozy seating in the back room and mezzanine, the warehouse-like space serves as more of a tiny neighborhood tavern, with customers saddling up to the long, full bar or tall tables to unwind in a city that never sleeps.
PLACE STATS

View: Place Reviews
Reviews: 45 | Ratings: 62 | Log in to view all ratings and sort
Reviews by sweethome:

Stopped in before a Rangers-Sabres game at MSG. Lucked in to two stools at the bar on a very crowded pre-game. Nice vibe of hockey fans. I tried the Keegan Ales Mothers Milk stout and stayed with it. They had a few other stouts, and what you would expect from faux irish pub - Stella, Sam, Brooklyn etc.

Asked (female) bartender if any "local" stouts on tap. She replied they had no local beers - then saw Brooklyn tap handle...huh? Asked about Mothers Milk Stout - "a stout from Kingston, NY." Sorry - but that is local enough for me!

Stout® Flagship has three tiers with ample seating and with bar areas on each. Really a great place to explore and a rather upscale, American-Irish restaurant/bar with 22 draught beers, a dozen high quality bottled stouts, and several dozen other bottled beers. Huge bar areas and ample seating in variety of different settings. It also has a truly excellent selection of Irish Whiskeys.

The food was really quite good, the vibe was fun (even though it was fairly quiet -- guessing it rocks when there is a crowd), and the service was very good. Note to visitors, this is Manhattan, so expect prices to be rather high. A great place to hang out.

Dark, high ceilinged space, very long bar down one side then tables along the other. A second level mezzanine of additional tables. About 2 dozen beers on tap, mostly craft beer. Long bottle list too with stouts featured. Good variety, quality beers but not many special releases, but some seasonals. Bartender was attentive. Burger and fries were good . Prices were high, but it's Mid-Town Manhattan so I guess expected.

A decent place to watch sport & drink a few local micro beers. The selection was around 40 on tap in various styles, including of course have a reasonable stout selection. They have around 30 or so seats at the long bar, then a number of tall tables & chairs & a also upstairs eating area.

The best thing that happened here for my wife and I was good intel to go to other brew pubs from our server. She was so nice in fact, that she wrote down the names and locations for us on a ticket from from her order book. Pretty nice. There were a shit ton of beers in this place. i had probably 15 different porters, stouts, IPAs, session IPAs, and not a single beer from my home state of California. When in Rome, right? However vast the collection of beers were, there was not a single bourbon barrel aged beer except for innis and gunn oak barrel aged, which isnt bourbon or irish whiskey barrel aged. Bummer. Here comes the bonus, we discovered a gem that goes by the name of Maine Beer Company, Mean Old Joe. I enjoyed this beer. Here now comes the 2nd Bonus, a location called TOPSHOPS!!!!!! Legit Legit, too legit to quit!

Sterile and gimmicky. Some stouts, but not the "stout" selection you would expect from an establishment so named.

I just started working in the Financial District, and I was very excited to come across this establishment while wandering about during one of my lunch breaks. You can't miss it--the giant, crystal clear windows printed with the big glass of beer logo and the name--Stout. Not Mulligan's, nor Hooligan's, nor Patsy's Hole in the Wall, just...Stout. It said to me, "this is a respectable place that knows about beer, that knows you know about beer, and is waiting for you after work one of these days." So, one evening, when I had some time to kill, I sidled up to Stout. It was around 5:45 on a random weekday, so I was surprised to see a security guy out front. At first I wasn't sure if he actually worked there, because although he was quite large and dressed entirely in black, he had on a sort of dingy sweatsuit which didn't seem to go with the classiness the establishment appeared to be trying to project. Also, he seemed woefully disinterested in what was going on around him. He didn't even look at me as he quietly asked me for my ID, and he didn't look at that, either. He just kind of held it in his hand for half a second, then gave it right back to me. I shrugged, and walked inside.

I will say, it's a lovely venue. Cavernous and clean, with appropriately dark wood paneling that's lit up by those tall picture windows. The place could hold an army, and I imagine it gets pretty packed on the weekends. At that point, however, it was a bit barren, so I was easily able to grab a space at the bar and get handed a beer list fairly quickly.

The craft beer selection wasn't out of this world, but it was pretty solid, at least as far as bottles were concerned There was a nice selection of stouts highlighted in their own section of the menu, some of which I hadn't tried. The beers on draft were less diverse. There were some craft options listed among Budweiser and company, but they consisted of the usual local/semi-local or super popular choices you can now find in what seems like the majority of NYC bars. I ordered a Victory DIPA. I love that beer, but so does everyone else, and I therefore find myself drinking it every time I come into a place where I mistakenly suppose I'll find a good selection of craft on draft.

Stout obviously has to cater to the after-work Wall Street crowd, which generally cares more about blowing off steam than pondering ales. And because these folks' pockets run deep, it's no surprise that Stout's prices are well above average. My Victory cost more than other craft selections, probably due to the high ABV, but it was served in a 12 oz. glass, so in the end, the alcohol content was comparable to the other options. Ah, another typical ploy put forth by big money bars with a rich and oblivious clientele.

The service was ho hum. My bartender wasn't too interested in me, maybe because she figured she'd get a better tip from a man, or maybe because she could sense that I was disgruntled with the menu and the pricing.

Obviously, I prefer "craftier" joints, but I can understand Stout's appeal. And due to the limited choices in the area, I ended up going back for dinner with a friend later in the week. We shared the Ahi tuna salad and the calamari. Both were good, but again, rather costly. Since there were only two of us, we were forced to sit at a high boy on these tall, wobbly chairs so that the booths could be reserved for bigger crowds. It was rather uncomfortable, and the booths never did fill up.

All in all, this is a solid establishment in the Financial District with good food, good beer, mediocre service, and high prices. I'll likely be back: When you're this far downtown, beggars can't be choosers.

If you are an interracial couple DO NOT GO HERE. It wouldn't surprise me if you were to research the owner you will see that this person has no or very little formal education. This place is ran by completely uneducated bunch of redneck racists. Yes the STAFF. The customers weren't even paying attention to us. Me and my guy went here for lunch, and the staff all stopped, and gawked at us. We asked to move to quiet corner so that we could talk, and then the OWNER came over and slammed a door that was right by us. I cannot believe this place has expanded. It needs to be shut down. The way black people are treated here is unbelievable. There is no hiding it GO and WATCH. The STAFF, AND OWNER are sick, and pathetic. People should not patronize this vile, immoral, unethical establishment, so that it could get shut down. They are disgusting people!!!! People act like racism, and ignorance is a thing of the past, nope just go here, and witness it blatant, and out in the open. You see they hire 1 black waitress to hide their sick mentality, but I would put all of my money on the fact that they more than likely treat her like garbage. NO ONE SHOULD PATRONIZE THIS PLACE SO THAT IT COULD BE SHUT DOWN!!!!!

Extremely crowded post-work, pre-event bar, in midtown, in close proximity to MSG.
Good selection of beer
Typical NYC overpriced selection.
Ample seating.
Obviously a fully stocked bar, with a good selection of beer, both on tap and in bottles.
Just a few actual stouts on tap, with many more available via bottle.
Very spacious with multiple bars and areas that lead to a bit of a labyrinth-type feel.
Ample restrooms.
More than enough staff to accommodate the crowd without too long of a wait for food/drink.