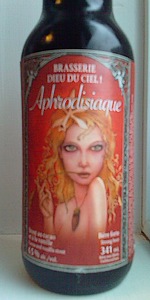 Black ale with aromas and flavours of vanilla, dark chocolate, bourbon and roasted malt. The vanilla and cocoa marry nicely, without out-competing each other, to produce a surprisingly well balanced beer. This beer is mildly hoppy, but the cocoa introduces a touch of bitterness. Its colour may be intimidating, but it is a very smooth beer within reach of most beer drinkers. This highly appreciated dessert beer is brewed with organic fair-trade cocoa and first rate vanilla beans.

341 ml bottle, from a Quebecois co-worker. ABV is 6.5%. Black colour, low tan head. Strong and pleasant aroma of cocoa and vanilla. The flavour is not very sweet, but has plenty of cocoa powder and vanilla, with strong coffee and bittering hops in the finish. No aphrodisiaque effect detected - maybe I am immune?

This is my new favourite stout among those that I can buy in my region. At $14 for 4 bottles it's so much better than I would have expected.
The look is pretty standard for a 7% ish abv stout. Dark black with brownish head that leaves a small amount of lacing.
The smell on this beer is by far the best I have ever experienced. I didn't have a bottle opener when I tried it for the first time so I had to whack it on the counter and when some spilled there was this huge rush of vanilla, chocolate, and beautiful malt.
The taste on this beer is very cool and the added flavours of vanilla and chocolate are done very well. The vanilla comes up front but is subtle and the sweetness is balanced well by the roasted malt. The chocolate follows into the aftertaste and is again balanced well by the bitter coffee notes of the roasted malt.
The mouthfeel is pretty good. Medium-full bodied with medium-low carbonation. Maybe a little more carbonation would be nice, but I like it.
Overall this beer is closer to a 97 for me. I imagine if you buy it from a store that stores it warm and it was bottled a year ago it'll be pretty rough. I got mine stored cold and bottled 3 months ago so all was well with mine. Honestly worth a trip to Quebec to try it on tap along with the other bangers by Dieu du Ciel. Great beer.

Complex but easy to enjoy...I really liked this.

11.5oz twist off bottle labeled "Aphrodite" poured into a teku glass at just above fridge temp 6.5% ABV. Bottled on 2018-01-16 (21 months ago). The beer pours dense black with just a glimmer of brown highlight if held to light. The head is modest, mocha brown in color and settles to a thin ring and single layer of bubbles. Minimal lacing. The aroma is faintly sweet with the cocoa and vanilla present. The taste is surprisingly bitter up front with dark roasted malt first, chocolate second and vanilla nearly gone. The finish is less bitter and somewhat drying. The mouthfeel is medium to thin bodied with adequate carbonation. Overall, good. Not what I expected. Shame on Shelton Brothers for delivering an 18 month old beer to the store and shame on me for buying it. Definitely a pass at this age, this price (5.99) and stored warm. I'm giving some leeway in my numerical score and hoping to find this fresher in the future.

Served in a balloon glass at Las Buenas Pulgas. Black colour, small beige head with short retention. Small lacing. Not much aroma, some chocolate, roasted malts, coconut and a hint of vanilla. Medium to light body, thin texture, flat carbonation. Roasted finish. Taste is similar to the aroma, but there's something I can't fiebre it out and I don't like. A bit of a deception to me.

The beer is fairly full-bodied, chocolate flavor and something a bit stronger nudges through--almost had a bourbon barrel aged quality. But the balance began to fall apart as the beer warmed. Some harshness, and surprising booziness for a 6.5%

O - Its alright. Cocoa is ok, but no vanilla. Flavors are muted.

Pour is jet black, leaking to mahogany on the edges, with a rich tan head. There’s a stone fruit note on the nose at first, then dark chocolate and hops.

The taste is a flavor adventure: black cherries, dark chocolate, a hint of vanilla, and smoky char. This is exceptional, IMHO.

11.2 oz bottle: This one pours an inky, dark brown color. There was a small tan head that didn't linger long or leave any lacing. Good nose. Cocoa, caramel, vanilla, some roasted malts, The taste is good. A touch of bitterness. Cocoa, some caramel, faint vanilla. A good stout.

A good beer of a style that does not fascinate me. Accustomed to Belgian beers with this I lack powerfully. But we must recognize that the brewery that makes this beer is professional.

Taste- starts with a quick sweet jolt of vanilla, caramel and little chocolate, followed by an intense wallop of burnt roast and accompanying bitterness. The vanilla than comes back and it finishes slightly sweet and bitter.

Overall- I was worried that there wouldn't be much vanilla or chocolate left because of the age on this one, but both were there in varying amounts, especially the vanilla. The sweet and bitter compliment each other really nicely. I look forward to getting some more next time I see it.

Souch fun to have this after peche mortel. Peche mortel is incredibly smooth for the style but aphrodisiaque is on a whole other level.

The vanilla and cocoa are balanced, natural and not.over powering. A lot of highly rated additive stouts could learn a lot from this beer.

Look: The beer pours an opaque very dark brown with 4cm of dense, light brown head that settles into a craggy cap after 3+ minutes. Good lacing and retention.

Smell: Moderate strength and sweet. Predominant roasted malts, dark chocolate, and vanilla. Faint coffee, caramel, and alcohol. Some dark fruit esters have developed over time. There's a definite aged quality in the nose but not in a bad way.

Overall: Every time I have this beer I really enjoy it. The flavour profile and texture are great for a sipping dessert brew. Excellent craftsmanship. This one aged very nicely by adding complexity and changing the drinking experience ever so slightly. A wonderful beer.

LOOK: dark black, but thin looking for a stout. Medium off white head.
AROMA: coffee, light chocolate.
TASTE: coffee, chocolate, roasted malt. Still no vanilla. Touch of tobacco.
FEEL: thinness confirmed. There is also a Dryness. There is a nice carbonation that keeps this interesting.

Good beer. Would be better with a little more body and the touted vanilla. It's no Peche Mortel.

This was poured into a nonic. The appearance was a nice looking black color with a thin white to off white foamy head that dissipated within less than twenty seconds. Stringy lacing wove around the glass. The smell had a strong roasty coffee bean and chocolate to sweet vanilla with an underscore of dark fruits. The taste possessed the strong roasty coffee bean and amplified the sweet level of chocolate to lead into the aftertaste and stroll right on into the finish. On the palate, this one sat about a medium on the body with a good sessionable aspect about it. There was a nice roasty and slightly bitter quality rolling over my tongue. Overall, this was a very good American Stout that has a lot going on. I would definitely have it again.

From Bierkraft. In Teku glass. Playing 8Bit Adventures. Lots of vanilla here,sometimes I found myself thinking it's too much but then I found myself eager for the next sip.Not much roasted profile

Notes: Nitro-stout appearance... not sure if it is, but it has that densely creamy tan head over a black-brown body. Aroma: cocoa in the nose kind of like walking into a chocolate shop. Flavor: Cocoa and vanilla upfront. Stout then steps in with a solid roastiness. Moderate bitterness. It walks the line between a dessert beer and a regular stout. Creamy medium body.

Lots of roast malts to start with bitter dark chocolate on the back. Lactose floating somewhere too.

Overall, not a bad stout. Wish it were thicker and sweeter.

Called Aphrodite when I bought a 4 pack at an LCBO near Toronto. Pours a deep brown/black with a nice tan/brown head with significant lacing. Lots of taste with chocolate, coffee, etc & a nice smooth & full mouthfeel. This becomes one of my top 2 favourite Canadian Stouts alongside St Ambroise Oatmeal Stout (admittedly I'm not a fan of the Imperial stout style but have heard there are some great Canadian offerings in that style).

Pours dark and oily with a brownish tinted head. Aroma of chocolate and coffee, big roasted malt notes. In the taste, cocoa, vanilla, mocha coffee, and a hint of smoke. Really a solid flavorful stout brewed with cocoa and vanilla. It's easy to drink for a full bodied beer, and is almost like a very well made dessert in a glass.

Appearance - Pours black with cola brown edging where light can penetrate. Cocoa-powder colored head that peaks at a half finger's width and fades rather quickly, leaving a mostly barren surface and a razor thin ring of suds around the edge of the edge of the glass. Minuscule spots, most of which slide back into the drink, make up the lacing.

Taste - Follows the nose. Tons of vanilla upfront and throughout, with lesser cocoa/chocolate character that comes in soon after. There's a touch of bitterness in the finish after the brew warms, but too little, too late.

Mouthfeel - Near full-bodied with moderate carbonation. Silky, nigh creamy texture with a slightly drying finish.

Overall - After the brilliance of it's sister, Peche Mortel, I can't help but be let down by this one. Too much prominent vanilla cuts out much of the darker character, leaving this tasting a bit too one-dimensional, even after warming up and flashing a bit of bittering balance. A one-and-done buy for me.

Aphrodisiaque from Brasserie Dieu du Ciel!
Beer rating: 94 out of 100 with 1712 ratings