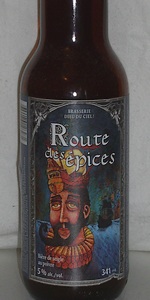 Notes: The Routes des Épices is a rye beer in which pepper has been added during the brewing process, lending it wonderful peppery flavours and aromas. The beer also reveals flavours of malt, fresh cereal, chocolate, caramel and a hint of fruit. In the aftertaste, the pepper flavour is once again revealed in full strength and it leaves a pleasing spicy tingling sensation on the tongue. A nice balance is attained between its spiciness and its multitude of other flavours.
View: More Beers | Place Reviews
Recent ratings and reviews. | Log in to view more ratings + sorting options.

341 ml bottle, merci to my Quebecois colleague Louis. ABV is 5.3%. Brown colour, minimal off-white head. Aroma of malts, caramel and over-ripe fruits, just a hint of pepper. Low carbonation. The flavour is distinctly malty, with plenty of caramel, but is not too sweet. A moderate bite of pepper in the finish, becomes very distinct in the aftertaste, and leaves a warming mouthfeel. Moreish.

Purchased from Beer360 in Richmond, a suburb of Melbourne, in Australia.

The beer poured a bright, metallic brown with golden glints as the light caught the beer, and an off-white, thin head that lingered throughout the drink.

The aroma was classic rye beer, with a strong spicy note, and some bready malt. There were some metallic notes on the nose as well, presumably from the pepper, and that showed through in the taste.

In the mouth, the beer had the classic rye spiciness that was foretold by the aroma, backed up by a creamy, metallic, green pepper taste that complemented the rye spice very well. There was also a fruity, almost ginger and bready undertone that balanced out the spice and worked as a perfect accompaniment to it. in fact typing that sentence made me think that there was an element of ginger in the beer, along the lines of a Stone's Green Ginger Wine.

The mouthfeel was smooth and slightly thick, accentuating the spices and rounding out the slight metallic taste from the pepper.

Overall I think this beer perfectly balanced rye's penchant to want to take a beer down a sharp, tangy road by matching the creaminess of the green pepper with the mellow, fresh fruit/ginger and bready base. For mine, this worked really well and created a very enjoyable experience.

Thick brown color, very cloudy. No head. Bread, malt caramel flavors coming out first. Didn't get the pepper in the initial dios but that fully appeared soon after. This is quite good even though a bit unusual because of the pepper but I'm liking the malty / bready side of it. The pepper is a good twist. Approved !
Note: I dont like rye bread but this doesn't taste anything like it. Should try another rye beer to compare.

the spicy rye and the peppercorn work well together. it is a nicely created beer that should be paired with some food I guess. It will easily stand up to even heartier dishes and is low abv.

Pours a light mahogany coloration with an amber tinge and a medium, fizzy head. Smells of light caramel malt, rye grain and and a certain green pepper note. Taste is dominated by caramel malt, and dark bread crust, with a strong rye grain character that is complemented very nicely by a mellow pepper note. A hint of dark fruit and toffee in there as well. Finishes bittersweet, with quite a bit more pepper coming through in the aftertaste that pleasantly lingers on the tongue. Smooth mouthfeel with a medium body and carbonation.

One of the better pepper beers I've had, I think the pepper complements the rye character very well here, which already has peppery undertones. Notes of toffee and dark fruit create additional complexity.

From Bierkraft. In Teku glass. Playing Cafe 0. The peppermint, although not excessive, its still too tiresome and hot for me. In any case, it can be finished without disgust but slowly

This was poured into a becher pint glass. The appearance was a hazy burnt dark orange close to bronzed amber. A little white foamy head started and dissipated at a nice pace. Thin stringy lacing spider webbed around the glass. The smell started off with strong spicy peppercorn up front and then the rye malt amplifying the spice. Delicate breadiness underneath. The taste was mainly spicy pretty much all of the way through. Spicy peppercorn to rye aftertaste. Smooth grassiness combines in the finish. On the palate, this one sat about a light to medium on the body with a fairly decent sessionability about it. Carbonation runs fairly light allowing the spiciness to hit my tongue with some nice harshness. Overall, I say this was a pretty good rye beer. It’s pretty spicy all around, so don’t expect it to be balanced. I think I could still have it again.

Lovely reddish brown colour topped with a tan evanescent head.
Smells of rye and malt.
Starts off with a typical red ale flavor to which the presence of peppercorn slowly creeps in and overtakes the original ale flavor.
A pleasant ale with an extra kick from the pepper. Works well when paired with roasted meats and salty chips!

Well, now! I seem to be delving, at least briefly, into the Rye Beer area of the Chez Woody Bottle Backlog. My Achilles heel is rye, which is why I have numerous bottles of rye whisky here and very few of any other distilled spirit. Man, I am so excited that this has become both a style & a routine brew for many brewers. Rye malt is tricky since it breaks down VERY easily & quickly & can create a sticky oatmeal-like mush that requires a hammer & chisel to remove from the mash tun. I have known a couple of homebrewers who, upon having procured an upgrade system, went whole-bore & then just threw out the mash tun afterwards. The resulting beer was to die for!

From the bottle: "Rye beer brewed with peppercorns"; "Route Des Épices (French for 'Spice Route') is a rye beer brewed with both black and green peppercorns. Initially, the beer reveals flavours of fresh grain and malt, which give it notes of chocolate, caramel, and fruit. The pepper flavour and aroma is fully revealed in the finish, which leaves a pleasant, spicy, tingling sensation on the tongue."

I Pop!ped the cap, only to realize that it was a twist-off! Quelle domage! I know, I know, all reviews MUST be done in English, but that just slipped out. Likewise, the beer just seemed to slip out of the accursed bottle & into my awaiting glass. It must have thought that it was getting off easy as it just sat there, but I gave it a hard swirl, followed by a light spanking. This raised both its ire as well as a finger of fizzy, foamy, light-tan head with modest retention. Color was Coppery-Brown (SRM = > 17, < 22) with Deep Amber highlights and NE-quality clarity. Nose was a bit heavy on the caramel, but the spiciness was still evident. Mouthfeel was medium. The burning taste of the combined peppercorns with the rye malt was both unexpected and unabating! It was like of those cinnamon jaw breakers that lights you up and never stops until you spit it back into the wrapper for another try. Okay, time for a shot of Rye Whisky. OMFG! What was it that David Bowie sang about "Putting out fires with gasoline"? Whoosh! Beads of seat broke out on my forehead, my eyeballs began to tear and water uncontrollably, my tongue was rendered insensate. Yummy! Finish was dry and peppery, but it was on the finish that the cool mintiness of the rye began to shine through. The conundrum begins when I attempt to rate to style, as opposed to taste. I liked it just fine & I know a local who would really dig it, but the rye malt was wildly overshadowed by the peppercorns. Phew!

Pour is hazy dark brown with an off-white head that is not durable and leaves just small spots of lacing.

Appearance: Very little head. It has larger sized bubbles with a brown and tobacco stained color but they fade out quickly. The body is opaque and it has a brown tea color.

Aroma: I am getting a bit of a woody oak aroma, a bit of chocolate, and the scent of caramel. The beer mentions that it is made with both rye and peppercorns. It doesn't really showcase these in the aroma but the overall aroma has a very prestigious quality about it. It almost has an English Barleywine aroma without the high alcohol scent.

Taste: Up front I get this burnt toast and light caramel character. There actually is a bit of a peppery character to it and it has just a little bit of heat at the end. Before that pepper hits there is a moment where some plum comes through. It has a nice combination of flavors. I am not getting any rye here.

Mouthfeel: It is very drinkable. It has a body that borders on the lower edge of medium and light. The beer has enough bite from the peppercorns to cut that light sweet caramel flavor.

Overall: This doesn't really showcase any rye character but the beer is still very good. The one I bought is about three years old, so while I can't comment on the beer young, as an aged beer it does very well and it retains a good deal of heat. While I wouldn't recommend it as a rye beer I would recommend the beer on its own merits and I would certainly drink it again.

A very interesting beer, however I cannot get past the amount of pepper in it. Strong rye flavors, with notes of toffee, dark fruits and coffee. This is clearly a beer that needs to be enjoyed with a hearty meal, unfortunately I did not pair it with any food.

This is one of the most interesting beers that I've had in a long time. It has a truly unique flavor. Admittedly, I am a sucker for all beers and wines with big pepper tones. This would be just perfect with a seasoned steak. I will be finding it again to do just that. However it is only a September to December availability. I might stock it for the winter.

The rye? and pepper goes the biggest of anything in the taste, some coffee note to it as well. This really should be drank slowly, there is definitely a lot going on.

Well carbonated. This was a strange one. If you're totally some rye geek, I would check it out.

Listed in the "1001 Beers To Drink Before You Die," this one will have to wait for my review as I can't find my notes.

Very interesting beer and quite a nice surprise as i had my reservations in trying this beer. Pours a rich copper color. Lots of spices , but especially black peppercorns can be detected on the nose.