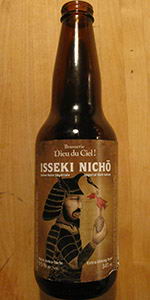 Notes: Special collaboration between Dieu du Ciel and Shiga Kougen, a Japanese brewery located in Nagano. Hybrid of an imperial stout and a Belgian saison, its color is dark black. Strong bitterness and roasted malt flavours come in first, and are well balanced by a strong alcohol level. Dry and complex finishing provided by the saison yeast.
View: More Beers | Place Reviews
Recent ratings and reviews. | Log in to view more ratings + sorting options.
4.1 by morrowd3 from Vermont on Apr 28, 2021
4.15 by jason_nwx from Oregon on Aug 03, 2020
2.62 by stephenlee93 from England on Jul 10, 2020
4.24 by Dentist666 from Russian Federation on Sep 10, 2019

Full disclosure - this beer is dated 2015. Pours a solid black with active carbonation and a creamy brown head that happily reappears with a little agitation.
Aroma is spicy yet notes of tart citrus, chocolate, coffee, and some cherry.
Taste aggressively bitter - dark chocolate, roasty caramel, coffee, grapefruit rind, and funky tartness.
Amazingly creamy full mouthfeel yet briskly carbonated; leaves a funky lingering bitterness - begs for another sip. Difficult beer to pin down - I think I really liked it....

A: Poured from the 330mL bottle into a tulip glass. The beer is a pure black color with a tan head that dissipates quickly.

S: Chocolate and some slight citrus and dark fruit flavors. This is a really unique aroma combination with some competing notes. Creamy vanilla and cola characteristics in there. Some spices.

T: Gingerbread and dark chocolate. Spices. Finishes slightly sweet and quite hoppy with a hint of dry alcohol burn.

Overall: What a strange beer, with lots of competing flavors and aromas that come together in unexpected ways. A good challenge for the palate and a fun one to try, but not one that I would probably pick up again.

A pleasantly unusual beer! Dark saison, but some porter and black ale characteristics.

A- This one pours a nice dark brown color that is slightly of motor oil and contains a two finger thick foam head, that is kamikaze short stack brown (as per my uncle)! It retains very well, starting out fizzy and ending as a half finger thick puffy caramel colored layer over the brew! Nice thick lacing coats the side of my glass and of course the carbonation is much too hard to see.

M/O- Medium-ish body and the carbonation is quite aggressive, allowing different flavors to burst on the palate. The alcohol is well hidden and the drinkability is very high! Pairs well with a dark chocolate, which adds a certain creaminess and I think would also pair well with a beef stew! Another winner from Dieu du Ciel!

11.5 oz bottle. No bottling date; I bought it on sale a couple of months ago.

This was NOT what I was expecting it to be. It's classified as a Saison, and I thought it would be more like a Belgian strong dark (BSD), but it's more of a marriage between a Belgian and a Russian imperial stout (RIS).

Right off, it pours very dark brown, with a thick, creamy head that lasts.

Smells like a RIS with a big of dark fruits in the mix -- Wonderful.

Mouth-feel is somewhat creamy, and medium to heavy.

Overall: This is a very unusual, and damn good, beer.

This beer reminds me somewhat of Boulevard's Dark Truth stout.

I rated this beer for what I liked about it, and not based on what I think a Saison, or Belgian strong dark should taste like, as this is clearly an animal of a different sort.

Look. Dark rich and nice 1/2 inch head.
Smell. Smokey, with a hint of a typical saison smell.
Taste. Oh so yummy, not really much to compare it to since it’s a hybrid. Smooth, with a nice after tastes.
Feel. Nice smooth and for a dark p, refreshing.
Overall. Definitely a great beer, might have to go back to get another glass or 2.

An incredibly unique beer to me. Bottle 8/2015. Pours black with a huge dark beige head that was well retained but left very little lacing. Smells of roasted malts and dark fruits. Taste is where it becomes unique where saison meets stout. Tastes of roasted malts, char, coffee, dark fruits, licorice, citrus and spices along with a bit of farm house funk. Finishes moderately bitter with a creamy mouth feel, lightly carbonated.

L: This beer is beautiful a dark pitch black pour, with a large head

T: Dark fruit, roasted malt, coffee, sweetness, a major maltiness that's overwhelming and made me pour it down the drain. I don't know when the beer was brewed but it tasted very funky and not in a good way. I'm a huge fan of Black IPA's and dark beers in general but when something is overly malty I can't take it. The flavors were drowned out and I was left with a terrible infected beer taste in my mouth. Similar to one of the previous reviews, I admire the brewers innovation but don't know if it really works. I don't think the darker styles work with the farmhouse style of brewing and for that reason, "I'm out"

O: Not my cup of tea/beer

Appearance: Poured with two fingers of head that boasted very aggressive carbonation, and excessive carbonation on the pour. It retained fairly well, and laced like crazy. The body, is as advertised, black as a stout.

Smell: Smokey burnt malt is the primary smell, but there is a mix of several well balanced undertones. Notes of dark chocolate, orange citrus, black licorice, tea and even a bit of a kelp like note to it. Warming brings out the already ample profile on this one, so more points here.

Taste: Slightly smoked malt up front with a bit of citrus, that loses itself to a mixed bitter note as black licorice, bitter herbal and earthy hops and excessively strong coffee, that occasional gets saved by a sweet hint of citrus and apple, but is frankly drowned out.

Mouthfeel: The carbonation helps out the entire beer, which would be good if I liked the taste, but isn't the case for me. It's a jump off the cliff as far as transistioning as the initial mild aspect just gets annhilated by the middle of the beer. It also has a clingy mixed bitter aftertaste with a hint of metal dryness that builds as the beer goes on.

Drinkability: Well it's very light for most dark beers I've had, and easy on the system, but refreshing it is not. The carbonation settles down well enough but the flavour and mouthfeel, I just can't get over.

Final Thoughts: I applaud the brewer(s) for pioneering a dark saison, but I'm honestly confused as to why and what they were going for here. I expected a light porter, or mild dark with a focus on the fruiter saison notes and smokiness. What I got though was a bitterness that most Black IPA's can't boast, only here the bitterness isn't caused soley by excessive hoping it seems. It's not my cup of tea, but this is more because the flavours didn't appeal to me then it being a lack of craftsmanship. If you are in to Black IPA and want something a bit different, this is probably down your alley.

Essentially a hoppy black saison with quite a bit of umami and smoke to it. Pours a darker black body, one finger white head, short retention, good lacing character. Smell is light smoke, herbal hop aromas, light milk chocolate, touch of funk, light leather, and a bit of a game-y umami smell to it. Flavour also demonstrates a game-like umami smell on the background of herbal hop aromas and a touch of smoke, there is a bit of milk chocolate and graininess as well. Mouthfeel is medium lighter bodied, good carbonation, with a distinct soy-umami flavour on the finish.

a crazy combination in my opinion but then again I'm not a brewer so..

honestly, for my semi-refined palate, I found it difficult to pick out much Saisson out of the Imperial Stout here,,

Smooth, given the ABV

An interesting but ( IMO ) a wasted effort

2016-09-07 $can 3.50 11.5 oz poured into a belgian tulip glass at about 16 deg C
Totally opaque black. Very little head and the smallest ring of foam ever.
Belgian yeast and season ale.
A mix of season and stout. Lots of belgian spiciness with added roasted malt. A phenomenal amount of various flavors fight it out inside my mouth. Lots of spice, mint with a faint sugar final. Licorice and apples.
The carbonation is very champagne like. And the 95.% abv is totally hidden till you've swallowed.
An unusual ale. I bought a 4 pack and will wait for it to age to drink the rest.
This beer followed a bottle of grande noirceur (a really good IS from the same brewers ) so perhaps not the best of circumstances. And I admit I am a newbie with season ales. Still worth a try.
Had another bottle 6 months later! June 25th 2017
Much more balanced and a really interesting brew! I am glad I have 2 more to try. Can"t wait till x-mas for bottle no 3 of 4.