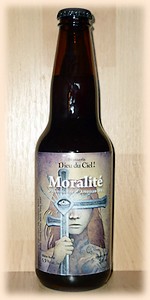 Notes: The concept of Morality is perhaps a subjective one, as the history of alcohol in Quebec may demonstrate. This IPA is brewed with a dare-we-say excessive quantity of Simcoe, Citra and Centennial hops. The dry finish is highly aromatic and slightly resinous, invoking tropical fruits atop dominant hop bitterness.

Moralité was crafted at our Montreal location in 2012 in collaboration with John Kimmich of The Alchemist brewery in Vermont, USA.

-hazy orange-amber bottle pour with swirling yeasties, a 2 cm foam cap and a fresh aroma of pine and grapefruit. The flavors are well balanced; resin, citrus and watermelon are amidst a moderate hop bitterness. The finish is crisp. This is a flavorful and very appealing brew.

Bottle poured into a pint glass

A-Hazy yellow pour with a good 2 inches of off-white foam. Glass wasn't the cleanest so I didn't notice a lot of lacing.

S- This has to be the most aromatic IPA I've ever had the pleasure to experience. The citrusy notes pop with huge grapefruit and tropical fruit tones. I'm not normally a hop-head but the nose on this beer really is fantastic.

T- A bit less citrusy than the nose would suggest, but still extremely pleasant and fruity on the tongue. There is a slight resinous and dry finish, but overall it doesn't have an extreme bitter taste. The hop profile really is more citrusy than straight up enamel destroyingly bitter which I can very much get behind.

O-Fantastic beer that I was pleasantly surprised by. Probably the best smelling beer I've ever had, and the tongue on it ain't bad either. If you have access to this beer you should definitely try it out.

A- Opens well and pours a tiny head that is gone in seconds. Medium gold color and unfiltered

T- Oodles of hops. Like a Chinook/Citra based blend. Not much Citra but you can tell it's there for sure.

O- Pretty good. Glad I grabbed a couple of 4pks for the future.

i've had this on-tap at Dieu Du Ciel's brewpub and in bottles. brewed in collab with The Alchemist brewery in Waterbury VT, this IPA is the closest cousin to Heady Topper that i've had. it pours a beautiful deep golden color, forming a thin, white head that dissipates quickly. it's obvious that it is unfiltered, as there are plenty of yeast particulates floating in the glass (akin to when Heady Topper is poured into a glass).

on the nose, there's a strong floral hop presence with a sweeter, more fruity bitterness. a good enough malt backbone is present on the nose to balance the hops. subtle citrus comes out. in a way, i wish this beer gave off more on the nose; it has such a great profile but the scents are somewhat subdued and not as strong as i would prefer.

on the palate, the beer opens with the floral hop taste, lots of citrus and fruit with some pine in the back. there's enough malt in the background to support the nice hop bite, but it isn't as malty as the more west-coast styles. this beer isn't a palate wrecker, and is in fact extremely drinkable for the bitterness it has (again, harkening to HT). the mouthfeel is quite nice, not too viscous and not thin.

overall, this is probably the best IPA that Dieu Du Ciel makes, and likely the best in the Quebec (if not Canada). the influence of Alchemist's Heady Topper is apparent but this beer still has a unique character. if you're in Montreal, i'd highly recommend seeking out this beer (and paying a visit to DDC's brewpub).