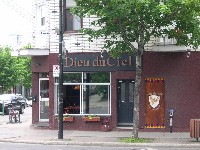 A 10 minute walk down from the Laurier Subway Station (Orange Line) had BA Erica & I passing first St-Denis, then St-Laurent, almost there! A handful of the local firemen were hanging out in front the opened wooden doors of Station 30. They were all chatting, drinking their cans of Pepsi & some were even smoking as they jealously eyed the passers-by in the humid mid-afternoon heat, many of whom were on their way for a thirst quenching Friday evening drink next door. I had to pause for a short while; the frontage & grandiose architecture of the grey stone building which houses Station 30 was originally the city hall, fire station & police station for the Town of St. Louis, which merged into the City of Montreal, it now also houses a Firefighters Museum, impressive stuff.

This marvelous castellated edifice sits right next door to Brasserie Dieu Du Ciel, yet alas the contrast could not be starker. Our destination had a rather modern frontage, a drab dark purple-brown ground floor is punctuated only by characterless 1970s style stainless steel thin framed windows, broken by two low slung window boxes each sporting rich yellow Daffodils. A gold lettered sign is set against a black wooden running board declares that we had arrived at Dieu Du Ciel!, the exclamation mark makes all the difference. The whole exterior is partially rescued by a cool one person balcony which sits atop the corner entrance.

Inside the atmosphere has an immediate cool feel; Brown Café chic meets with a working class founded basic necessity which lays a solid utilitarian aspect to the layout. Dark woods and darker pastel walls lower the lighting over a light speckled marble like floor. Corner entrance opens into the front room; the Brewery is on view behind full size glass panels to the right. Tables and chairs litter the whole area with a pseudo-random arrangement, irregular but they all seem to be in a specific place. A small raised area with seating completes the back wall, whilst the bar is to your far right, wedged at an acute angle into a corner lending a triangular look to it. As for the legendary smoky atmosphere, well the Smoking Ban in Montreal started two days earlier on May 31st, this alone adds at least 0.5 points to the atmosphere, smart move.

A large brass colored box runs the top of the bar with a line of small black plastic tap handles. Beer range; was quite simply, excellent. 17 numbers on the Chalkboards provided spaces which were filled with 16 Beers and one dead space on the Friday.

All in, a perfectly balanced range of house brews include trusted & favorite styles, interspersed with a few rare ones as well as some specialty adventures, some of which work rather well. This is backed up by a limited range of Guest beers, but they are varied & all from quality purveyors, some I have never seen before on tap, such at the Oak Aged Yeti. The quality of the house brews is without question the real treat & attraction here. Head Brewer, Jean-François Gravel certainly pulls off some rather marvelous brews, though they come at a price. I picked up a bottle (#51) of the April 2005 Grande Noirceur Imperial Stout to share & the 9% brew was a tasty price, but worth it.

I didnt bother with any food. Service at the Bar & when experienced at the Tables, was actually very good, despite some warnings from local BAs & beer drinkers, I found that it was attentive, sharp & courteous during my time imbibing.

I managed two visits here, the first on an afternoon with some fellow East Coast BAs after a lovely sun soaked Friday lunchtime session at the 2006 Mondial de la Bière. On this occasion the place was quite literally packed, with Festival goers, Friday revelers, beer geeks, brewers, tickers, spotters & many a self-confessed self-famous beer nerd. A relaxed entrance & visit by Phil Markowksi was testament that even though the place was full, it never quite felt over-crowded. My second visit though was a quieter affair with BAs Erica & Goldorak, we quite literally had our pick of the tables, the place was as empty as could be, I enjoyed this peaceful time to reflect on the interior a little more.

In summary, this is Beer Mecca when in Montreal, & it lives up to the hype but plays down the egos, always a pleasure to frequent such BrewPubs. No complaints at all from me, erm, well maybe except for the prices, but you payz yer money & yer takez yer choice, quality aint cheap after all.

Very chill place with a great selection. Went on holiday in Montreal and this was on my checklist. Had a very good margarita pizza and a flight of their IPAs and a glass of péche mortel. Reminds me of a 90s brewpub, but only in a positive way. Highly recommend.

Came here with a friend on my first visit; was flying solo the second time.

The beers ranged from very good to outstanding, and the service was great on both occasions. I also enjoyed the Margherita pizza and mixed green salad. Had an awesome conversation with some beer geeks from Las Vegas and New York City, who were kind enough to share the Symboise with me (thanks again!). Overall, this is a world class brewpub with amazing beer, a really cool atmosphere, and good service and food. Definitely a must-visit when in Montreal.

An amazing place that I always visit when in Montreal. They usually have about 16-18 different beers on tap and rotate many of them quite regularly. The place has a really chill vibe, even when it’s busy. The food is basic but well prepared and satisfying. This is a landmark in the Montreal beer scene.

Top quality stouts, the rest of the beer selection is generally good with rotating taps. The péché mortel is the piece de resistance, delicious in any of its many forms. The nachos are decent and the charcuterie is alright also.

Visited during our recent vacation to Montreal. Nice location in a residential area in north central part of the city. It is a bit smaller than I expected. Bar area is darker wood and pretty typical of a nice pub. The service is great! very attentive servers. We ate lunch while there. Pub type food, a small but very tasty selection. The beer selection was great, as was the quality. It was so good my wife wanted to go back a second time while we were there, so we did!

One of the best (if not THE best) bar/brewery in Montreal. The bar is fairly large in size but was completely packed on a Sunday night. ~17-18 beers on tap, with wine/cocktail options as well. The beer selections are diverse, ranging from traditional styles to experimental beers (such as a black saison). Beers are sold at a fixed price based on size, and prices are more than fair. Didn't have a chance to try the food, but the menu did look very promising.

A must visit for craft beer fans in or visiting Montreal!