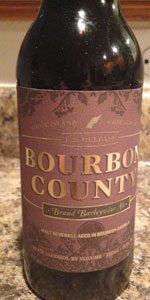 Notes: Aged in the third-use barrels that were once home to Kentucky bourbon and then our renowned Bourbon County Stout, this traditional English-style barleywine possesses the subtlety of flavor that only comes from a barrel that’s gone through many seasons of ritual care. The intricacies of the previous barrel denizens – oak, charcoal, hints of tobacco and vanilla, and that signature bourbon heat – are all present in this beer. Hearty and complex, Bourbon County Brand Barleywine is a titan and a timeline; a bold, flavorful journey through the craft of barrel aging.
View: More Beers | Place Reviews
Recent ratings and reviews. | Log in to view more ratings + sorting options.
Rated: 5 by RoyalKaiju

4.61/5  rDev +2.2%
look: 4.25 | smell: 4.5 | taste: 4.75 | feel: 4.75 | overall: 4.5
Dark brown with a slightly orange tinge when head to held to the light. A light foamy carbonation with no real head per se. The smell is of caramel, toffee, a hint of stinky foot, molasses, and that’s about it. You can smell the alcohol as well. The taste follows the nose in perfect tandem. Moderate carbonation which lightens the brew and makes it very palatable. Very typical to Bourbon County- like others by goose island of this same kind of bottle as far as mouth feel. Medium body with very light due to the carbonation. I got this several years ago and it was sitting in a cabinet in my parents basement since 2017 in Canada. I brought it back to Phuket Thailand where I am drinking it December 27, 2022.
Dec 27, 2022

Moving right along with the BCBS vintages I picked up from Goose Island’s brewpub while I was in Chicago, we have rheir legendary Barleywine! I’ve been wanting to try this one for years, so I have decently high hopes for it. Hopefully I’m not setting myself up for disappointment but let’s crack it open and find out

A medium full body pairs with gentle tingling carbonation, resulting in a smooth and slick beer. Finishes mostly dry with a nice tang

Damn, this is awesome. Goose Island absolutely needs to bring this one back soon, I’d love to try it fresh

Reviewed by fujindemon74 from Pennsylvania

O- a most astounding attempt at an English Barleywine, would purchase upon sight

Reviewed by trevormajor from Ohio

Reviewed by 1BrewBacca from Georgia

Reviewed by jcoleMA66 from Massachusetts

A: dark mahogany brown. Minimal head when poured that quickly dissipated. Should have been a little more careful pouring - there are a few floaters from bottom of the bottle.

O: Tastes tremendous for an 8 year old beer! Very happy to have the opportunity to finally try this beer, and looking forward to trying other vintages I picked up.

Reviewed by micada from New York

Rated by ajmarohn from Colorado

Based on the 2017 i opened this beer is awesome.

Reviewed by Jo_Renish from Vermont

Appearance - Pours a deep amber/mahogany with zero head development. A light swirl reveals the potent fusel presence and a stocky viscosity in its legs.

Aroma - Dates, fig, and sweet molasses are the striking features in the nose of this beer, followed by a peeping pear quality and a notable barrel presence.

Overall - This takes the crown for a barrel aged barleywine, hands down. I can't recall a time in recent history that I've been as impressed with the representation of a specific style. Incredibly impressive!

Reviewed by wally_world from Illinois

4.58/5  rDev +1.6%
look: 4.5 | smell: 4.5 | taste: 4.5 | feel: 4.75 | overall: 4.75
Sampling a 2017 bottle poured into my snifter. Ive had this bottle in my cellar since acquiring it via a trade 2 years ago.
The cap pops off with a light hiss. the beer pours a deep mahogany color with minimal khaki colored head foaming up. This foam is densely packed and fades to a thin edge layer soon after I pour. the edge layer remains throughout the sampling. There is some surface action as streams of carbonation rise up to replenish the surface, but to no avail.
The aroma on this beer is bold. I get lots of malt notes with brown sugar and toffee, dark fruits, some plum and red grapes here. I also get a little bit of black peppery booze and general alcoholic heat. NOt much of a hop character on the nose of this beer. Seems about right for a nice english barleywine!
First sip reveals a pretty thick body with sticky syrupy texture and almost no carbonation.
Flavor is complex and malt driven with molasses, brown sugar, toffee, dark chocolate and a bit of tobacco note. I also get a little sweet vanilla, but a roasted malt note lingers long after each swallow. I dont get any hops, but the booze is present, both as black pepper bite and also as some warming notes on each swallow. this is a bit of a sipping beer due to the high octane and the warmth. But the beer also drinks very smooth and this is very enjoyable. A great boozy example for the style.

A: Poured into a snifter to a deep brown beer with some slight red tint. The beer is topped by a dense and slightly rocky finger of light tan head which fades quickly to a collar around the edge of the glass with minimal lacing.
S: Smells of toffee, caramel, vanilla, and oak along with some dark fruit notes
T: Taste is toasted coconut, caramel, toffee, vanilla, oak, a little dark roasted malt, and some hints of cocoa powder/chocolate. On the swallow there's some slightly boozy notes, dark fruits, coconut, caramel, vanilla and oak with some lingering caramel sweetness.
M: This beer has a fairly full body with a slightly chewy fell on the palate. Carbonation is on the low side of things but it's adequate for the style while the beer has a drying finish.
O: Overall this beer is just outstanding. The flavors and complexity are everything that you want in a barrel aged barleywine. The flavors are very well balanced as well which makes this beer an absolute pleasure to drink.

Pours a deep, murky iced tea brown, sitting in the glass somewhere between a brown ale and a stout in appearance. Zero head - just a quick ring of dark tan foam that builds and disappears in seconds. No visible effervescence.

Nose: Rich, sweet malts lend toffee, caramel, molasses, brown sugar, and just a ton of dark fruit. There are some darker malts in the mix as well pending some cocoa and coffee. Huve aromas of dried cherry, raisin, fig, plum, dried blueberry, and ruby port. Plenty of oak, vanilla, and leather, as well as some bourbon and barrel char. A subtle, but very interesting minty spearmint note as well. Just a little bit of sherry-like oxidation.

Palate: The barleywine greets the palate with a TON of malt. Rich, sweet, luscious flavours of toffee, caramel, coconut sugar, vanilla, and molasses. Next, a huge wave of dense, sweet dried fruits come in, lending notes of dried cherry, raisin, dried strawberry, dried blueberry, and more fruity port notes. There's definitely some darker malt character in here, which translates as a chocolate coating over those dried fruits. There's also some block milk chocolate as well. This moves into a huge malty nuttiness with pecan, vanilla, marzipan, and malted milk. There are some baking spice notes of cinnamon and nutmeg, before those dark fruit notes slowly fade, letting some dark chocolate, coffee and cream, and a huge malty nutty note emerge. I do believe the bourbon character is here, but it has just transformed beyond what I generally recognise as bourbon, and has taken on a more fortified wine profile. There is plenty of toasted barrel oak though, which emerges in the finish with dark chocolate, light coffee and cream, tawny port, vanilla, praline pecan, brown sugar, and caramel. Everything eventually slowly dries out, until all that's left is a lingering note of sweet malt.

Mouthfeel/Body: This barleywine really captures what do many barleywine fans love about barleywine. Straight out of the gate, this stuff ia just chewy, thick, viscous, you name it. It actually fights a little just getting past the lips, and it definitely clings - both on the lips and the palate. You can taste thing one for 5 minutes after a sip. Effervescence is extremely low. It isn't still - it still has some fuzz to it, but it's not a bubbly beer - just a little CO2 texture. Extremely full-bodied.

Overall: I've heard a lot about this barleywine, but I didn't really discover Bourbon County until after this was already phased out. It really can't be lumped into an English or American-style category. It definitely leans English-style, but the darker, roasty malts give it some American flair. I'm not sure what the hop presence was like when this was fresh, but here, 6 years later, they're way in the background. Still, it has held up with very minimal detrimental oxidation, and it's just such a full, bold, well-rounded barleywine that really has everything going for it. I think age has actually smoothed this out a bit -cooling off the heat and smoothing out the bite. It's a fantastic barleywine with some darker malts in it, and while it's a bit of a dark fruit bomb, it really does have some nuance and subtly, and it's well worth seeking out to try - even at 6 years old.