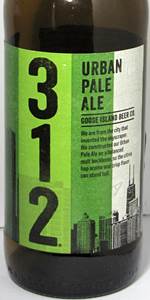 Notes: We are from the city that invented the skyscraper. We constructed our Urban Pale Ale on a balanced malt backbone, so the citrus hop aroma and crisp flavor can stand tall.

Taste, light bodied affair despite heavier than average malt body, the high carbonation and hop choice seems to contribute to the levity relative to the malt usage and quantity. Bitterness is in the 50ibu range, the bitterness lacks flavor for the most part so it gets the grapefruit designation. Toasted pale and crystal malt keep this one chugging along. Its a major brewery's attempt at making inroads on the pale ale game, something they've never impacted market share with in any meaningful way. So this is the watered down, non offensive gateway pale ale from Budweiser essentially. No off flavors. Just mundane stuff, which is ok sometimes.

Not a bad beer, however I'm quite disappointed. Minimal hop characteristics and too heavy on the malts for a pale ale in my opinion. Much better versions of the style available at the same price point. Unlikely to revisit.

This is okay but not Goose Island Beer Company's best effort whatsoever. Most certainly not worth the top shelf price.

InBev bought Goose Island and took over brewing this wheat ale. It used to be good . Now it SUCKS. InBev or AB has totally ruined this beer. It tastes like a watered down boring kind of sugary piss ale. Nothing like its former self. This is proof that AB knows NOTHING about quality beer and can only brew sickly watered down garbage that is remarkably tasteless.
They ruined 312. DONT buy this beer.

Nothing special a pretty good beer. No longer available.