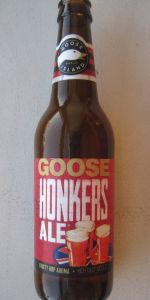 Refreshing with a little bit of a bite. I would drink it again. Forced to drink the rest of the beer at 8:00am because my wife got into my beer frig because she needed a beer to make corned beef & cabbage with a beer in it. I quickly grabbed the beer from her after she poored half of it in the crock pot and drank it before she could waste the rest.

A: crystal clear; 1 finger off white head that receded to a wispy cap; sheets of lacing;

T: nicely balanced; earthy hops with toffee sweetness; light bitterness with a bit of caramel sweetness on the finish;

O: would have liked a bit more bitterness;

Clear copper with a big, lightweight off-white head that never gives up the fight.

Not much aroma wafts off this foam, with some floral, crisp lager-like notes faintly present, and some banana sugar as it warms.

It might sound heavy, but some nutty, caramel notes are refreshing and light, with a little raisin and light roast coffee supporting them. Bready and toasty qualities are present as well.

I had this tonight at Mondo's in Iowa City. It was served way too cold and in a frosted glass. So, I let it warm a little....

Medium gold with a creamy bone white head. The cap faded to a broken film and deposited a good bit of intricate lace on the pint glass. Very nice for a bar pour. The nose wasn't too impressive, but to be fair, I did most of my aroma assessment when the beer was still fairly cold.

It's amazing how with some beers the aroma and the flavor don't match up with respect to quality. This was one of those cases because Honker's Ale was delicious. Perfectly hopped with a flavor of candied grapefruit peel, it was wonderful from the first cool sip to the last room temperature one. The hops were so much in the foreground that it seemed more like an IPA than a pale ale. Not much malt, but that's perfectly fine with me.

The medium body and the creamy mouthfeel was the icing on the cake. It also stood up very well to a spicy Buffalo chicken pizza. I haven't heard Goose Island mentioned in the same breath as a lot of the other quality U.S. microbreweries, but Honker's Ale (on-tap anyway) is very good beer.

Picked this one up when I was in Ohio and brought it back down with me along with pretty much the rest of the lineup. I had forgotten they were in the fridge, and when I cleaned it out the other day I found this. Enjoyed it with dinner last night. The twelve ounce bottle was served slightly chilled and poured into a pint glass.

Appearance - Poured a nice dark amber color, with some nice reddish tints to it as well. Good two inch plus head of frothy white foam that hung around for a good few minutes before finally settling down into a thin film across the top that lasted throughout the session. Good side glass lacing and some nice carbonation throughout the glass.

Smell - The aroma was nice and malty. Pleasing aroma of caramel and nuts that blended in with an earthy and bitter hoppiness. Some nice light undertones of candy like sweetness as well mixing down and covering the grain like base.

Taste - The flavor was damn good I have to say. Crisp, and rich with a good dry and bitter finish, Started out with a good rush of caramel and morphed into a kind of wet hay like flavor which drew out some cereal and bready malts giving the middle a sort of biscuit like flavor. Nice hint of some slight fruit in there, maybe a touch of grapes as well.

Mouthfeel - Very nice medium bodied ale. Good carbonation and a fuller then expected feel to it. No thinness of lack of body here, this was very tight and a fine ale.

Overall this was one of my first experiences with the style and I have to say I am very impressed. I would still prefer my IPA's however this was very nice indeed. I would have no issue at all trying this again any day!

Amber orange color with a thin head.
Aroma with notes of mild pine, some caramels and English hops.
Flavor with notes of caramels, earthy and spicy hops, mild ginger, slightly toasted malts, tea and some yellow fruit citrusy. Dry aftertaste with a medium but persistent bitterness.
Light body with appropriate carbonation of tiny bubbles.
Pleasant English Bitter, perfectly balanced and very easy to drink. I could have a few in a blink.

This brew pours a clear amber color with a small white head. The aroma is quite balanced, malty and hoppy. It is a bit faint though. The taste is a lot more assertive than teh aroma. It is balanced, but leans a little more toward the hoppy side. The mouthfeel is medium bodied with ample carbonation. Overall, this is a very drinkable brew; great for sessions.

12oz bottle thanks to biglobo8971, into a Midnight Sun glass.

A golden copper colour it has very good clarity and foam retention plus some spotty lacing. Nice looking bitter.

Smell is of bread and caramel with some citrus hoppiness pretty faint in the background. A touch of spice there as well.

Tastes of biscuits and bready malt. Also there is caramel. Very much malt based with some spice and tiny citrus flavour at the back end. Does get a little too malt driven at times even for the style.

Solid body for the style. Carbonation level is about right. The bit of spice at the back really helps keep this sessionable. Nice and consistent.

Good bitter. Does everything it needs to. Easy to drink as a session beer and enough to keep you interested if its your only one for the night.

This ale poured a orange copper color into my pint glass with an off-white head. It smells of bread and fruity citrus.

The taste was very nice. Some biscuit malt, bread and some citrus hops for a balanced taste.

The mouthfeel was fairly light but smooth. This is a good session ale. I can drink this all night. This ale also goes well with pizza.

All in all, a nice English Bitter from Goose Island. I can see why this is the flagship ale.

Poured from 12oz brown bottle into a clear pint glass

M: A little dry for my tastes for the style and a woody aftertaste. Smooth, medium-bodied, and nicely carbonated.

D: Offers a good mix of hops and malt flavors, but the woody aftertaste is a little off-putting.

Amazing beer from Goose Island, to date they have yet to let me down. Pours a dirty copper color with a medium thick off-white head, ample lacing and good carbonation. The aroma is outstanding containing a slightly mellow blend of flowery hops and lots of malt. The aroma reminds me of a low key IPA. As I sip on a few of these I'm amazed at the awesome flavor. The hop characteristic is near perfect. They are very present but not overdone. Strong blend of malts keep me intrigued. The balance is perfect. Full mouthfeel with a great finish and pleasant aftertaste. Fantastic beer, I can't say enough about this one.