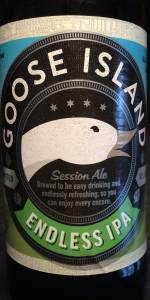 Notes: Long days and warm nights awaken the city. The list of neighborhood festivals is endless. As is the great music that brings us together in parks and parking lots. We brewed our Session IPA to be easy drinking and endlessly refreshing, so you can enjoy every encore. Bright note of fresh oranges and other citrus fruit with a mild body that is crisp on the palate.
View: More Beers | Place Reviews
Recent ratings and reviews. | Log in to view more ratings + sorting options.
4 by BorrachoOne from California on Apr 09, 2021
4.04 by lrend13 from Wisconsin on Nov 14, 2018
3.07 by Dkloubec from Illinois on Nov 11, 2018
3.75 by Chackman151 from Arizona on Sep 02, 2018

Poured from a 12 ounce can into a shaker pint.

Look - A light golden amber with a soft white head. Looks like an IPA.

Smell - Almost nothing. Just the ghost of hops.

Feel - Light body, light carbonation. Not much to say about it.

Overall - A very meh IPA. I guess it would make an acceptable session beer, but there's just not enough to it.

This is a light, summery IPA, and that's exactly what I was after when I picked it up; trouble is, it's an entirely unremarkable beer, almost bland enough to be blegh.

Tasted in a Spiegelau IPA glass from a 12 fl oz can on June 15, 2018. Brewed to be easy drinking and endlessly refreshing. Bright note of fresh oranges and other citrus fruit with a mild body that is crisp on the palate.

Pale, grayish yellow body with some coarse carbonation and a soapy white head. The nose is really nice mixture of tropical fruits- soft, succulent papaya, banana, and honeydew cut with orange rind and grapefruit,. White bread, too. There's also a mild metallic note that spoils this idyllic scene. The flavor drops out, all the fruity attributes are muted and a kind of plain-Jane malt and dry hoppy bitterness take over, not to mention that chalky metallic taste is still lingering. The body is just fine, sorta coarse.
The nose had the happy sunshine I was looking for, but the taste faltered and brought it down to "just another beer" level.

A - A nice looking pour, with a light golden body and a short white head. The lacing is fine but present, creating a thin-lined curtain on the side of the glass.

S - Hops, mostly, of grass and a touch of lemon, and a hint of malty sweetness.

T - The malt is more forward, underneath a punchy but largely nondescript bitter hop flavor. The close continues bitterness, as the malt drops away.

O - The problem here is a lack of much to grab onto to distinguish it. The hop notes are muddled and while pungent, do not offer discreet flavor notes that I prize when having an IPA.

Pours a clear golden color with Inbev levels of clarity and quality assurance, replete with 1/2" white head. Aroma went just as much grain if not more than any hops. What hops they used seemed non proprietary and lacking any dry hopping.

Taste was good enough, when you wanna keep the party going but not get wrecked, when you don't wanna sweat pounds. Still like every goose island hoppy beer, this one is lacking in the hops department, you just get the high alpha acid hop used here providing something close to balance. This isn't much different than their 312 ipa or whatnot, or their standard english ipa they had, slightly more bitter. Grapefruit, nothing sexy of juicier citrus or tropical fruit notes from these hops.

Thick white head. The beer is golden in colour with lots of ascending bubbles.

This is billed as a session IPA.

The beer has very mild notes of citrus and pine. There is also a hint of melon. I expected a stronger hop bitterness than actually exists. In fact, that aspect of the beer is kind of weak.

The taste is slightly sweet and then the bitterness rolls in, but again that part is mild. There is pine and citrus, as well as indistinguishable fruit.

The body is light and refreshing - at moments almost watery but not quite - and the finish is dry and crisp.


Overall, I quite enjoyed this but I have to confess that for the style I far prefer Founders Session IPA.

A very decent IPA for what it strives for. It's a lower alcohol content IPA (although 5% is hardly sessional) that still delivers what you'd want from a summer IPA when you hope to be have a few of them. It's lighter than what you'd expect from a Goose Island IPA and exacts a more fruity and less bitter effect than the usual, but this isn't necessarily a negative thing. To me it just hits a different note of what I'd like for an IPA, and differentiates itself enough with this that as a seasonal release I will just have a few on a warm spring evening with a few buddies.
L - Pours a lighter golden colour. Oddly fluffy head that sticks around.
S - Smells of citrus fruit and light grain
T - Lighter bitterness with a fruity taste of orange peel and citrus that doesn't overtake the hops. Finish is crisp and refreshing. Not the average IPA, and may not meet the bench for some. I personally really like this take on an IPA. The fruity nature of it is fun and pleasant to drink.
F - Crisp and lighter than you'd expect, but not "light beer" light. Just not the average. Leaves a little to be wanted.
O - Wouldn't be my go to IPA at all, but I don't dislike it. It's worth trying, but there's far better to be found for IPAs. This is from a big Goose Island fan.