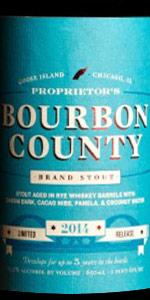 Notes: Proprietor’s Bourbon County Brand Stout is meant to show our immense gratitude to our neighbors here in Chicago – the loyal and adventurous fans whose support helped bring Bourbon County Brand Stout to towering new heights. Each year this release will differ from the previous year; a special variant created for Chicago and unique to the year it was released. Whether your first sip is today or was from that first batch in 1992, thank you for lifting us up on your big shoulders and joining us every year to celebrate the original bourbon barrel aged stout.

5 oz serving tasted in a long stem glass from draft at Phase Three Brewing on March 14, 2021. A wonderfully complex beer that hits all the right notes. Barrel aging done right.

Had on tap. Despite having 5 years of age on it, this reminded me what BCBS used to be compared to what we have in the last 2 years' lineup. There is nuance not hit over the head with adjuncts in both smell and taste. There is tremendous depth and character in the feel from both the barrel and the underlying stout. Rye, coconut, bourbon, very expressive wood, vanilla, rich fudge, artful booze and char, cinnamon, and a kiss of nougat. Smooth, refined, sweet but not cloying at all, boozy but balanced. Incredible.

Lucky to try this, I was expecting a five year old bottle of bourbon county to be over the hill. This was nice. Great coconut flavor even though they used water. Sweet, spicy, and delicious.

The cinnamon bite is a bit much for me, but this was an enjoyable dessert treat.

Viscous void black with a thin fizzy dark mocha blanket dying to nothing but a still oily surface.

Cinnamon is way more potent than I imagined, and it's also impressively chocolatey, especially on the nose. Coconut rides smoothly but faintly in the background, enhanced more by the barrel characteristics than its own contributions.

The barrel makes for a very mature and rich experience, while helping to avoid decadence. As you sit with it, the cinnamon mellows out, allowing notes of dark fruit, mild char and Tootsie roll to develop. Accents of crisply carbonated herbal cola characteristics contribute a lightness to the thick body, which finishes semi-sticky. The exhale is brownie crust and chocolate pie with a touch of vanilla whip cream.

Years on down the line, it's worth noting that Goose brought a keg to FOBAB 2021 in order to promote a side by side with the new Fourteen, and it was just a musty, oxidized, cardboardy and pruney mess. We have exited the window in which this brew can shine. For all who haven't opened theirs yet, my condolences.

Ran into this whale for $50 bucks in 2017. Sat on it for 1 year. Absolutely amazing. World class all the way. Goose Island is still the best. I have tried other really great beers from Bottle Logic, Funky Buddha, The Bruery, 3 Floyds but GI Remains number 1. 2018 Regular BBCS was amazing for $10 a battle. Cant beat it. Variants are pricey but worth it.

A friend ans I were watching hoops on a cool Saturday. After a couple gaming reversals and a delicious 2011BCBCS we decided ti bring out a good one.

In a word this hums with cinnamon on the mouth front and back of the mouth . It has every aspect of an excellect bourbon barrel aged stout and the cinnamon. A little, not too much. About a perfect beer.

L- Pitch black coloration (even against the flashlight on my phone), very minimal brown head at pour which dissipates quickly

O- Nice blend of chocolate and spices play well with the rye whiskey and woody components. Would like for the coconut to stand out a little more but that may have given way to the other flavors after cellaring. A nice entry in the Proprietor's series.

O: One of the best bourbon county beers I’ve ever had. Unlike some of the 2014’s after 4+ Years, this one remains in excellent condition.Solidifies 2014 as one of my favorite years by far.

Pulled from the mystery wall at Prop Day and consumed almost immediately.

L: Dark black and moderately thick, with zero head
S: Super cinnamon, with a hint of oaky barrel
T: Awesome, lots of cinnamon, but just enough so it's not overpowering, with a little bit of coconut taste on the back end. The coconut is not the same sweet coconut flavor you normally get from coconut as an adjunct though, it's more of a subdued, smooth coconut. Nice booziness from the bourbon barrel too.
F: Perfect thickness, and I'm probably overrating the feel a little bit, but I just find it impressive that they nailed a great mouthfeel with this much cinnamon being up front. Most cinnamon-forward beers suffer a little on mouthfeel.
O: This one really lived up to its reputation. It's a shame I can't get more of this. Almost a perfect beer. In fact, I'm even pretty sure that it's even keeping me better hydrated than other beers with all the coconut water. Prove me wrong!

Finally got to try this variant. A friend was nice enough to open a bottle to celebrate his birthday and couldn't have been happier to be there and share the moment with him. Anyhow, the beer it self poured out dark black with a thin head on top. The smell of the beer is sweet but also inviting with the soft coconut aroma coming off of it. The taste of the beer still has plenty of coconut in there even after 4 years which is awesome. The feel of the beer is full bodied. Overall this one is a gem, definitely one of the best BCBS's out there.

The mouthfeel has a great weight, with a good carb level still present. Sticky, and buttery smooth.

The beer pours a Pitch Black with a thin khaki head that recedes immediately. It has low carbonation. The beer smells of fudge, charcoal, vanilla, cinnamon, bark, dark fruit, and a little bourbon. It tastes of cinnamon, fudge, vanilla, charcoal, dark fruit, with a hint of bourbon. The beer has a medium body, with good complexity. This was a great bourbon county beer, but not quite what it once was. Smoother but the coconut is completely gone.