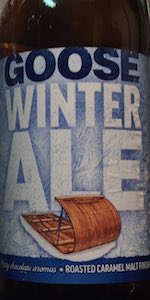 A brown ale for people that don't like brown ales

Reviewed by nicholas2121 from Ohio

4.02/5  rDev +11%
look: 4.25 | smell: 4 | taste: 4 | feel: 4 | overall: 4
Goose Winter Ale brewed by Goose Island Beer Co., With an ABV of 5.30% This American Brown Ale pours out a nice brown color with a small off white head. This brew has the look of cola, not saying that is a bad thing. The smell is rich with roasted grains and malts and sweetness. You also pick up on some nice hop bitterness in the smell as well. There is a lot going on in this brew, so far. Between the look and smell this is one inviting brew. Now for the taste, it is bold with roasted goodness. You first pick up on roasted grains and malts then a mild sweetness, with mild hop bitterness. The chocolate and caramel are a nice touch to this brew. There is nothing overpowering about this brew, it has a super nice balance to it. The body of Goose Winter Ale is a soild medium. I really enjoy how smooth this brew goes down. This brew would go nice with a dinner or a winner day. The mouth feel of Goose Winter Ale is Bold, Sweet, Rich, Roasted, Clean and Refreshing. Overall I am going to give this American Brown Ale a 4 out of 5. I would definitely look this brew up again giving the opportunity to. Goose Island Beer Co., Did a real nice job with this brew.
Apr 09, 2018
Rated: 3.26 by Sneef from Alabama

Notes via stream of consciousness: I thought I'd better get this one in before spring begins. It's poured a crystal clear chestnut brown body with a ruby colored sheen to it. Unfortunately the fizzy light tan head dropped immediately. Perhaps I have a dirty glass here? I'll have to give it the benefit of the doubt. The aroma delivers a light bit of chocolate and caramel, and some apple and berry-like fruitiness backed by earthy, leafy, and gently spicy hops. The flavor follows the aroma but with the fruitiness take more of center stage than I'd expected it to. The caramel remains, as does the chocolate - well it's actually more like a light dusting of cocoa powder - and there is a nice touch of nuttiness to it as well. A median bitterness balances it (the bottle label lists 25 IBUs), and it finishes a little sweetish but mostly dry with some of the aforementioned hops lingering. It's light-medium in body which might explain the lack of head retention, and it's lightly crisp. Overall it's a nicely made, well balanced brown ale that's got some character to it but just doesn't have that certain je ne sais quoi that makes a beer magical.

Rated by nunitn from Arizona

Appearance: Clear dark brown to dark amber color when held up to the light. Initial white foam died back rapidly with no lacing.

Taste: Toasted malt, quite sweet with sugary notes and a hint of molasses. Finish is lightly bitter; a little bit leafy and a little bit English hop.

Mouthfeel: Light but prickly carbonation that comes across a little bit as fizzy. A little thin. Dry finish.

Overall / Drinkability: A bit of a no frills brown ale. Good, but not great. But easily drinkable and I think would pair really well with food.

Reviewed by feuematt from Pennsylvania

Reviewed by SaltofOH from Ohio

A: pours a dark Amber or reddish brown, cola-like with one finger Sandy head that quickly fades. Very active visible carbonation. Clear, though visibility is hard because it's dark.

S: some mild roastiness, but a pretty mild affair. Less hoppy than the other browns I've had lately.

M: true to appearance, the carbonation is high. This feels really watery, lager-like.

O: wow, what a disappointment. This is not a bad beer; it's not even missing the right flavor notes for the style - it has them - it just feels like you took a really good English brown and watered it down. I've had Milds with less than 4% ABV have more traditional English flavor (looking at you, Uncle). Overall, it scratches the itch, but I'll take Turbodog over this 7 days out of 7.

Reviewed by MichaelProcton from North Carolina

3.37/5  rDev -6.9%
look: 4 | smell: 2.5 | taste: 3.75 | feel: 3.25 | overall: 3.5
Nice look to this beer, particularly if we're just calling it a brown. Very dark brown, though it shows some ruby tones under light, and though you can probably credit my accidental-ish superpour, it brought up thick, creamy dark khaki head. I frankly didn't like the nose, though it was probably well past its prime as a Sheetz discontinued markdown. I did get some nuttiness. The flavor is certainly more redeeming; you get the welcome, fullness of coffee and dark chocolate, but without much bitterness. Also a very smooth mouthfeel for the flavor, though perhaps a bit thin. I bet this would be great on tap by a fireplace.
Jul 15, 2017