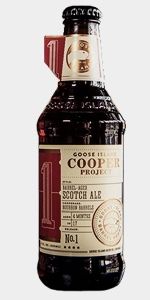 Pours a chestnut brown color. Clear when held to the light. Thin off white head dissipates leaving just some spotty slicks of off-white foam on top of the beer.

Smell has notes of brown bread, caramel malts, and a touch of dark fruits. Nothing in the way of bourbon here.

Taste has notes of vanilla, brown bread, caramel, toffee, a hint of dark fruits, and some wood. The flavors are very mellowed in a way that you really get from the barrel aging. That being said, there is really not much bourbon character here like you'd expect from a barrel aged beer. The flavor profile is very nice for a wee heavy.

Feel is moderate to full bodied, smooth, with a touch of heat on the back end. Moderately carbonated.

Overall this is a good wee heavy. As it is, the barrel aging is more of a subtle complimentary aspect rather than a feature. On its own blind merits, this is a good wee heavy that I would drink again. However, its advertised (and priced) like a barrel aged beer. I expected more based on that. I understand that this was only aged 4 months in a barrel and then blended with unaged beer - but its still disappointing overall.

This is my first review on BA, so it's going to be "unrefined".

This is the closest I've come to springing for Goose Island's BBCS without actually pulling the trigger. I've had plenty of other lower-price-tag bourbon barrel porters and stouts, and even amongst the well-regarded ones, this is on another level. Perfect balance of malts and carmel up front with just a slight touch of booze as it goes down. The finish is incredibly smooth - the best aspects of scotch and bourbon linger on the palate for several seconds. Almost can't call this a beer - it should be sipped slowly out of your favorite scotch glass. By far the best "buzz" of 2017.

12oz bottle, 2/1/17 12:09, 8.7% ABV. Pours transparent amber with a medium sized off white head. Smells of bready malt, oak, bourbon, caramel, vanilla, and peat. The taste follows exactly with oak, bourbon, bready malt, caramel, vanilla, and some peat. Slightly less flavor intensity than the smell would suggest. Mild sweetness and bitterness. Average body and above average carbonation for the style. Overall, the smell/taste is pretty good for a BA Scotch Ale, but it could use a little more intensity.

Really mild barrel character. Overall pretty tasty, I just wish it would’ve been aged longer in the barrels. It’s still worth trying, especially for the price.

I was excited for this one, but unfortunately it was underwhelming. Based on Bourbon County, Goose's reputation for barrel aged is very high. It got better as it warmed, but it's just average. I suggest buying a single bottle if you can, like I did, because it's not worth buying the 4 pack.

Pours a copper with a white head. Smells of caramel, toffee, and oak. Tastes of light bourbon, oak, caramel, toffee, light fruits, and malt. Medium creamy body and medium carbonation. Overall it’s a pretty mediocre scotch ale, nothing I would get again.

Outstanding scotch ale, very surprisingly smooth and easy-to-drink. Nice dark brown color with some tan head and spotty lingering lacing. Smells of bourbon, malt and some dark cherries. Tastes of great bourbon and wood, caramel, malt, dark stone fruit and a hint of vanilla. Goes down extremely smooth, very little alcohol burn and no lingering bitterness or sour aftertaste. Smooth creamy mouthfeel with just the right amount of restrained carbonation. Alcohol taste is very well hidden. Will have to try their other projects!

Came in a stemmed glass an Auburn/tawny color with a thinner light beige head atop,a nice rich color.Aromas of the vanilla tinged bourbon and caramel in the nose,a slight toastiness was detected as well.Very easy to drink for the style and size but that doesn't mean it doesn't pack flavor,vanilla,roasted nuts,caramel,and earth all come together well but it never gets heavy and/or cloying.A nice bourbon barrel aged Heavy but I would give it to novice'ss to try as well.

Notes via stream of consciousness: I've had this on tap at the Philadelphia location but I feel that you can never really get to know a beer in 4 ounces so here we go. It's poured a mostly clear, just slightly hazy, reddish chestnut brown body beneath a full head of tight-bubbled and yellowed off-white foam. The aroma clearly expresses oak and Bourbon over a gently caramelish malt base. Just smelling it is pretty nice. The flavor follows, as usual, and the Bourbon and oak are really nicely smooth. They've still got enough strength to be quite clear but they're not brash or bold or too far forward - very nicely balanced; and the maltiness follows as well, bready, caramelish, and even a bit toffee-ish. Sometimes a Scotch ale can be a little too malty and almost syrupy but that's not the case here, nor is it too caramelish; I'm mostly finding golden and medium caramel notes. The bitterness is there but beneath the malt, balancing it, and helping it to finish mostly dry. It's really quite pleasant. Due to the oak I'm finding an occasional note of coconut but I don't expect everyone to find that, it seems some people get it and others don't. The alcohol is nicely balanced, but then again at just 8.75% it should be. I'm really curious now as to what this might taste like prior to barrel aging. In the mouth it's medium bodied with just a bit of a dextrinous edge, and a light, smooth carbonation.
Review# 6,504