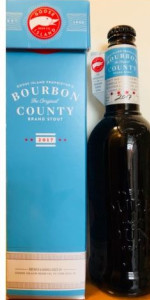 Pours black with a decent dark tan head. Aroma starts with the typical BCB roastiness and wonderful barrel notes. Banana definitely remains on the nose, which i was a bit nervous about due to the age. Cinnamon is also fairly prominent, nutty characters are present but subtle. Banana is definitely the most prominent adjunct aroma. Taste is incredibly sweet but not cloying and incredibly good. Rich chocolate and a molasses like sugary sweetness up front. Roasted malt and big bourbony vanilla and charred oak on the finish. The banana characters also come out on the finish and add really great notes to this beer. Cinnamon remains quite prominent, and in the taste is the most prominent adjunct; it’s huge actually. I get a bit of almond, but like the nose it’s def the most subtle of the 3 listed adjuncts. Just phenomenal. Mouthfeel is smooth, full bodied but not unnecessarily thick, with dangerous drinkability. Overall, just a truly stellar beer. I wish I would have tried one fresh as I’m guessing the banana would have been even more prominent. Regardless this is still exceptional and is one of my favorite Props to date (I have now had them all except 2019). Worth seeking out.

This is excellent. The banana and cassia bark are outstanding, the aromas and flavors overall are incredible. While the barrels are more subtle than expected, they have a solid impact on the flavor. A top notch year for Prop.

Look: Opaque and black. Not very thick or viscous appearing as it pours from the bottle. A loosely packed, brown, head forms with an aggressive pour, settling to an island of foam in the middle, and a thin ring around the edge of the glass. No visible carbonation.

Nose: Everything comes through with the cassia bark shining, followed by the banana, and last, the roasted almonds. Has a cinnamon/nutmeg banana bread thing going on. Vanilla and toasted coconut bourbon barrel notes.

Taste: Once again everything comes through in the flavor as well. This beer is far from overly sweet. The cassia bark is prominent, but not dominant as in other beers I’ve had with this ingredient, including Bamburana and the more recent BCBS Cafe de Olla. I’ve never had this beer fresh, so I cannot comment on how it’s changed, but if you don’t like cassia bark you may not like this beer. The banana comes through as ripe / green banana. On the tip of tongue it starts sweet with raisins and brown sugar. After that not overly sweet or pushing dessert/pastry as with some other banana stouts I’ve had. Mid palate dark, dried fruit including fig and date. I get a lot of cocoa and dark chocolate. Some dark chocolate covered raspberry jelly rings. The beer finishes long, bitter and slightly toasty with toasted bread and burnt sugar.

Feel: Nice BCBS level of medium carbonation. Seems to have held up nicely. The feel is medium bodied. Not too thick, not too thin. Not too warming on the palate, but I feel it in the pipes a little as I drink the beer. Some sticky sweetness on the lips.

Overall: Excellent. I see a lot of comments about “banana bread” looking back at reviews from friends. I can see it, but it’s not liquid banana bread. It’s dryer and more bitter. It’s quite complex in the flavor. I think cassia bark, while I like it, can make a beer less “drinkable” because it is such an intense flavor. Fortunately, I don’t find it takes away from the drinkability of this beer.

NYE beer 2019. Won this bottle at Prop day last year from the wall pull and stored in my cool basement. The bananas were still very prominent on the nose and pallet. I forgot how much I loved this beer! It’s a very sweet beer but normal for a pastry stout. If you can get a properly stored bottle, don’t pass it up.

Bottle: Poured a pitch-black color stout with a large dark brown foamy head with good retention and some lacing. Aroma of rich sweet chocolate notes with some vanilla and bourbon notes with light bananas notes also perceptible. Taste is also a mix of sweet chocolates notes, some bourbon and vanilla notes with light woody notes with some perceptible but subtle notes of bananas. Body is full with nice creamy texture with good carbonation. Another solid pastry-like stout from Goose Island.

Bottle shared by Dave. Thanks man!

The beer pours a nice jet black color, thick, oily, viscous and very opaque with a tan head that lacks any retention and yields no lacing. The aroma is great, brûléed bananas, lots of dark rich chocolate, cinnamon, marzipan, charred oak, spicy bourbon that does offer a bit of heat with a bit of lingering vanilla. The flavors are great, excellent balance of cinnamon, marzipan and banana, much like bananas foster with some nice vanilla and a pleasant charred character brings out the oak barrel, soft bourbon and rich dark chocolate. The mouthfeel is great, coating, thick and heavy with a luscious texture that finishes easily but warmly.

Verdict: A very good rendition of BCBS from Goose Island. I was quite skeptical going in but the cinnamon character is really enjoyable and the rich chocolate flavors pair nicely with the banana and the bourbon barrel just adds more and more depth of flavor. World class beer.

Drank this after aging it for a year. Poured black with a thin tan head. Thick. The smell was cinnamon and banana, with the cinnamon coming on strong. Not much nutty smell. The taste was chocolate and banana and then the sweetness of the cinnamon came through. The more it warmed the more prevalent the cinnamon and bourbon became. For being a 14% stout it hide the alcohol very well. Excellent beer.

Received in a trade and cracked on Black Friday 2018.

A - Poured into my Duvel tulip a nice darker black with a thin fizzy mocha head that fades quick quickly to leave just a barely there halo. Nice legs for the ABV.

S - Aromas of some nice bourbon aged stout, chocolate, flashes of cinnamon. Not much nuttiness. Don't really get any big banana notes, just super super subtle which I don't understand at all. When it warms, and I mean really warms to almost room temp, I get a little it of banana bread aroma.

T - Taste is thankfully a nice rebound from the nose. Some nice nuttiness along with a good bright cinnamon flavour. The banana brings some pleasant sweetness. Little bit of caramel, like over sauteed bananas foster. Alcohol hidden very, very nicely, though the finish is a bit syrupy.

M - Mouthfeel is nicely carbonated, though borders on being a crisp initially. Alcohol is hidden nicely, only knock is that it's a bit syrupy.

O - Overall this had all sorts of potential but until it becomes almost room temp I get practically no banana. A solid stout for sure but this absolutely pales in comparison to previous Props.

Consumed on 09/28/18 so, the adjuncts may have faded.
The smell is mostly of unripe, green bananas and chocolate. The taste follows with equal parts chocolate and banana with cinnamon accents and subtle hints of bourbon. The almond presence is minimal. It tastes like a bourbon, banana, chocolate milkshake.