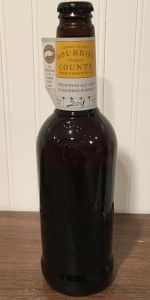 Notes: Made from two-row and malted wheat, Bourbon County Brand Wheatwine is making its debut this year (2018). As the first recipe to veer from the original Imperial Stout since Barleywine in 2013, Wheatwine is a deep amber color, lighter than it’s BCBS counterparts and a true medium to convey the characteristics of 4+ year old Heaven Hill Bourbon barrels. Wheatwine is full of high caramel, vanilla, butterscotch, and toffee flavors.

A: caramel brown with very light head covering the top that fades to a lace around the glass

F: caramel and toasted malts, vanilla and oak leading with molasses, maple, and rasin. Again light and refreshing for a BA beer.

O: nice change for the BCBS line if you want something lighter and more mellow.

Appearance: This beer pours the exact color I was hoping it would for the style. Translucent reddish-brown. Iced tea. Under the light:
deep, ruby red. Streams of minute bubbles rise to the top of my glass in single file lines forming a thin off white head around the edge of my glass.

Smell: Toffee, caramel, butterscotch (especially as it warms), marshmallow, vanilla, coconut, sweet potatoes glazed with maple and marshmallow (fresh on my mind from Thanksgiving), Creme brûlée/caramelized sugar, tawny port, carrot cake with rich cream cheese frosting. Raisin and dried apricot, but doesn’t ever get much more fruity, and certainly doesn’t go heavy on the dark dried fruit for me.

Taste: I’m not going to list out a bunch of different flavors. This beer is cohesive. It tastes like all of the above combined perfectly. I think the brighter fruit notes of dried apricot pop more and a nuttiness comes out as the beer warms up. There’s a slight ethyl alcohol aspect to the beer, as expected for the style and high ABV. It all works well and is never hot.

Mouthfeel: This beer is pillowy soft. Soft carbonation. The sugary sweetness coats my lips and will be there when I wake up in the morning. Warming on the palate and in the pipes.

Overall: At it’s coldest, my first impression of this beer was barleywine. Specifically, BCBBW 2017. But, upon warming up and further inspection this beer delivered much more complexity. I love this beer. I’ve only had two variants so far (Midnight Orange) and this is the clear favorite so far. A style that allows for so much complexity, and this beer delivers. If the alcohol mellowed over time this could be even more of a gem than it is today. Again, I don’t think it’s too hot, and alcohol probably counterbalances the sweetness.

The beer pours a dark amber color, nice opacity but there is a bit of clarity, almost like a cola brown with a thin tan head, very fizzy that dissipates quickly leaving no lacing. The aroma is okay, strong oak, moderate char, a bit of bitter chocolate, lots of burnt wheat and dark toasted grain, soft bourbon that has a nice caramel quality but it's quite hot and the charred and roasted qualities really take over. The flavors are better, lots of caramel, brown sugar, rich malted grain but again, the barrel is really strong and heavy on the charred oak flavor, the bourbon is hot and spicy and there isn't a whole lot else going on. The mouthfeel is okay, a bit syrupy but it coats well, medium body that finishes with a bit of heat and feels quite dry.

Verdict: A pretty poor showing from Goose Island. Beyond the char, roast, smoke, burned qualities, the beer is ultimately bland and somewhat syrupy from a texture perspective. Not a lot of redeeming qualities in this one.

say what you want about goose island, who owns them, how bad their ipa is, whatever, when i drink this, i instantly forget all of that. big thanks to my brother for the procurement of this bottle. we had a blast drinking it. it sure is sturdy, wow, the alcohol content here is off the charts, a total blazer, but as warm and wintery as it is, its not over the top boozy, shocking for its listed strength, but this is exactly what i want in the style, a little zip always works in its favor. the beer is a few shades darker than anticipated, a copper color, rust maybe, without a ton of head on it after a moment, and a viscous density and a little less than fully clear. aroma of strong whiskey, butterscotch, and vanilla beans, a cooked sugar thing, probably very long boiled, the grain is quite concentrated, simple though really from a malt perspective, a lot less complexity on the base beer than i thought their might be, but i dont mind that, the wheat is fresh tasting to me and it adds a lot of body to this. im not sure how good this would be without the barrels, or rather how interesting, but with the whiskey, its incredible. a nice rich maple sort of sweetness is there with all the oak and vanilla character, and the bourbon itself is quite flavorful from about halfway through until the end. sweet sure, but not overdone. caramel, toffee, butterscotch, vanilla cream, its just awesome, dense and woody, long lasting, and something im sure will age super well like all of these do. i knew this would be great, but it still exceeded my expectations! perfect for holiday time.

‘18 Bourbon County Wheatwine. Pours a nice, rust color. Thin, as expected, and, obviously a lot of wheat and sweetness on the nose. A surprising deviation to the Goose Bourbon County family. A lot of heat right away, that sticks with you after it goes down. A smooth mouthfeel, however. The bourbon here is overpowering. Not a good balance.

Dark amber color that is nearly clear with reddish tints and a sudsy tan head that dissipates in seconds, this big ol’ wheatwine tosses around boozy vanilla and toffee notes like rice after a wedding.

The mouthfeel is nice and full, the final check mark for this big, full-flavored, balanced beer.

Pours a deep amber as advertised with a small ring around the top that falls off quickly. Smell is bourbon, caramel, vanilla, a bit of dark fruit, almost fruit cake-like. Taste is toffee, caramel, light bourbon, almost a bit of fig taste. It's sweet. It's full bodied, but smooth and creamy. Very light carbonation. Overall, it's a unique beer and quite tasty. I like sweet beers, but this is really sweet.

Mouthfeel is thick, rich, but a little too still. Overall, it's good, but fall short of excellent.

The 2019 version of this variant is spectacular. The beer has a soft ale consistency which is a nice change of pace from their heavy stouts. It does have a very full body though. I would describe this as a caramel slice of bread. The barley and wheat sweetness carry the beer's flavor.

WW Ale has a bit of funk to it but not too much. Quite a bit of yeast sediment on the final pour.

Pours out thick, a dark honey color. Yellow brown. Half a finger of white formation. Bubbles rise extremely slowly to the top. Appears to be some form of sediment floating or suspended with in. Very light flakey pieces.

Taste is similar to the nose. Strong booze, butterscotch/toffee/caramel, fruit. This eventually cascades into a strong bready character. A touch of savoriness. Like taking a chunk of freshly baked bread. The tiniest, and I mean almost insignificant, presence of bittering from hops.

Full bodied mouthfeel. A bit of stickiness. Very fine bubbles which lightly hit the pallet and then disappear.


This is a very smooth, straightfoward brew. It doesn't blossom out as much as I had hoped. The booze doesn't have anywhere to hide so it sticks out quite strongly. A slow sipper that might need to be accompanied with something. Enjoyable enough by itself, but a tiny bit underwhelming.