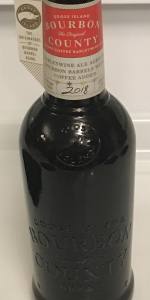 Notes: Working with our friends at Intelligentsia, we flew down to Guatemala to source some of the world's best coffee to use as we release the first-ever Coffee Barleywine. The beer is an English-style Barleywine, meaning malt forward, and aged in 4+ year old Heaven Hill Bourbon barrels before adding La Soledad coffee beans right before packaging to retain a bold coffee aroma and flavor.
View: Beers | Place Reviews
Reviews: 68 | Ratings: 213 | Log in to view all ratings and sort
Reviews by michaelsmith11:

I wasn't sure about this variant or how they were going balance the coffee with the barleywine tastes but they pulled it off very well. This a very well balanced beer that is very rich and thick without being too overbearing and sweet. The coffee flavor is big upfront but then you get a nice taste toffee dark fruit and a little heat. Very well done by GI.

Many thanks to a decidedly non beer nut friend who grabbed a few variants for me while I was gallivanting about Beijing over Black Friday. 500ML bottle split with my wife.

The brew is a deep red with virtually (& in reality) no head at all. The nose is a portrait of restraint: toffee, coffee, wood. Subtle & understated as an Oscasio-Cortez outfit.

Bourbon County Barleywine with Coffee sounds weird, tastes better. Once brought to the lips, this is hard to detach. Front & center is the barrel, & it’s strong, tasty, & fantastic. Coffee, more roast than Caribou, is a subtle compliment. Limpid caramel & toffee mid-palate, brown sugar, molasses, & one day’s serving of alcohol. Syrupy. Lovely. Could have happily taken the bottle by myself, & might have to seek this out on tap.

I was weirded out by the coffee barleywine, now I’m just sad it’s almost gone. Kind of like a couple of goth chicks I dated back in the day. Excellent beer that skirts the border of the elite.

Produces a modest, very fizzy head which quickly fades to nothing but an oily residue and a thin rim around the glass. Brew itself is clear but dark brown with garnet and purple highlights. Nonetheless the brew is lively in the glass.

Aroma rises from the pour, and speaks strongly of the coffee influence. Compared to the "regular" BCBBW, the coffee influence really gives the nose a completely different direction. Figs, raisins, cherries, and bourbon are firmly in the background. No real hint of the sky high ABV.

Flavor is a bit more balanced, with three main influences competing for primacy: coffee; bourbon barrels; and the huge EBW malt base. At first, it seems the barleywine takes prominence, with big notes of brown sugar and toffee, prunes, and chocolate. The coffee is immediately present, however, and by the second third, seems to be wrestling with the bourbon. Chocolate tones really emerge on the final third, with the prior-use BCBS aging in the barrels becoming more apparent. Finish is a touch hot, with cherries, coconut, oak, and vanilla, along with fading remnants of the previous flavors.

Feel is impressively full and silky; easy to sip and savor. Silky. After a solid minute or two (from one sip), an impressive, boozy back end heat creeps up the throat, but there's a very restrained alcohol bite throughout the sip.

Really creative and, ultimately, tasty brew. I don't think it succeeds as well as either BCBCS or BCBBW, but I'm glad they gave it a try.

A: The beer is very dark brown when viewed from afar; when held up to the light it is clear and dark reddish brown in color. It poured with a short off white head that rapidly dissipated, leaving only a minuscule ring of bubbles around the edge of the glass.
S: Moderate aromas of bourbon are present in the nose along with notes of coffee.
T: The taste starts off with flavors of bourbon and finishes with notes to hints of coffee.
M: It feels medium- to full-bodied on the palate and has a moderate amount of carbonation. There are some notes of warming from the alcohol in the finish.
O: This beer is quite easy to drink for something that clocks in at 15.1% abv as it hides its alcohol very well and also isn't that heavy on the palate compared to other beers in the Bourbon County Brand series.

Taste: bourbon and caramelized sugar up front. Coffee comes in on the finish. Really nice balance.

Feel: body is a bit lighter than standard for BCBS, very smooth and drinkable overall.

Poured into a Fremont small snifter. Pours a dark reddish brown with ruby notes and a thin dark khaki head that dissipates to tiny patches and a ring around the glass with slight lacing. Aroma of dark lightly toasted malt, dates, dried plums and coffee with slight bourbon; kind of smells like a mild stout, to tell the truth. Flavor is candi malt, rich fresh and dried plums, hint of caramel, iced coffee, treacle with some light bourbon in the moderately hot finish. Medium bodied with light to moderate creaminess and good carbonation. A somewhat hybrid malt body without the deep caramel notes of an English barleywine, but not as much citrusy / IPA notes as an American one. Coffee is noticeable and well integrated, but does not dominate. A little on the sweet side. I was least interested in this variant than any of the others this year, because I like coffee in dark beers, but am ambivalent about lighter coffee infused beers (I've not had a coffee barleywine). I have to say that I'm pleasantly surprised. The coffee fits in here quite nicely and other than being somewhat sweet, this is a very enjoyable and rich barleywine with a deft touch of coffee. Nicely done. It's odd how different the aroma and taste were, but it's very good.