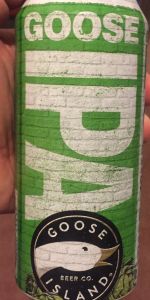 Notes: Our India Pale Ale recalls a time when ales shipped from England to India were highly hopped to preserve their distinct taste during the long journey. The result is a hop lover’s dream with a fruity aroma, set off by a dry malt middle, and long hop finish.

Look: Clear, slightly pale gold with about a half inch white head.

Overall: This is pretty good, I'd say it's a very "normal" IPA; probably a good one to start with if you've never had an IPA before (don't be like younger me and jump straight in with a double IPA when all you've ever had before is Keystone, haha).

follows the nose; staunchly herbal and "green" tasting. leans hard into the bitter within the bittersweet of the grapefruit, with a crisp dash of citrus that cuts clean through. slice of pepper in there. a biscuit malt with tinges of light caramel lays down a solid base in the background.

overall:
on the fence with this one. three glasses in, my first being the night before, I still can't tell if it is enjoyable enough to go back to another pack later at some point. it does stand out, being very herbal, and focusing on more of the bittersweet of the grapefruit aspect than the citrus, and coupling with a biscuit forward malt. the feel of the brew really makes me reconsider the brew in a negative way though. maybe it's the startling revelation that I have neglected a subgenre here. it just wasn't complicated enough of a flavor to sit through a rather less than enjoyable finish.

Attractive light amber body with a lasting fluffy head, medium carbonation. Smell is a very inviting fruity hops semll. Taste starts out as a great fruit hop bite with a generous maltiness but sadly finishes a bit sweet with a slight metallic tinge which lasts on the palate.

An easy pour yielded a fat finger of creamy white foam with long retention and small blotches of lacing.
Clear golden straw body, a few small bubbles rise in support of the lasting island and ring.

Mild smell of biscuit and bread with very faint herbal and citrus hops.

Semi-dry with low bitterness, citrusy hops (featuring grapefruit) keep it from being too dry. Pale malt is forward in the taste with some toasted bread and wheat. Alcohol is well hidden minus a slight astringency and pepper. The finish is fast and Lager-like, crisp and clean. Grapefruit tasting hops linger a while with peppery spice.

Medium-light body with plenty of carbonation, smooth and balanced. Nothing unusual to report, true to style.
Great looks on an unpretentious and reasonably priced Beer. BB 10DEC20.

I haven't had many English IPA's but I consider this one solid for style and at worst a pretty good ale. I feel like it may be underrated due to being mistaken for an American IPA or people not considering how far American IPA's have pushed the limits. As it is a subtle, more balanced ale it does seem a bit lack-luster next to a typical AIPA which is what makes this and other decent representatives of the English style great if you are in the mood for something a bit more mild.

Not a fan of IPAs in general but always on the lookout to try something new. This one looks very good when poured, a rich and clear gold color. Lots of hops on the nose, which smells a bit soapy to me. Pleasant but unexciting taste, medium carbonation. Overall an ok IPA.

When comparing this to the vast amount of amazing IPAs that are found in Chicagoland area this is a step down, but is still a great hoppy treat. Yes it's a step down, but minor. The taste is not as potent, the hops aren't sharp, and the best part of this choice of IPA is the price. It's an bargain IPA compared to others. It's still enjoyable, but due to it being a step down it is to be served at 40-50 degrees. Throwing it in the freezer to chill or serving over ice really kills the taste.
Overall, this beer is part of my rotation for hot days when I'm feeling frugal and is always found in either my trunk or fridge.

A standard IPA. I poured two 12 oz. cans into a clear liter mug. A nice lingering head, yet not overly carbonated. Not much lacing, though. Nothing here to make it a go to, but I'll drink it again.

*Poured into a Teku glass at 50F from a 12oz bottle for review. Poured rest into a nonic pint glass*

This beer poured a clear copper-orange, reminiscent of orange cough syrup. Had a half finger white colored head with a medium retention to it.

The taste more or less followed the nose in that I got a massive citrus and other fruity notes in the front, reminding me of tropical fruits such as lychee, mangoes, pineapple, and grapefruit. Then towards the middle, I was able to taste more of the sweetness from the malt--bready and sweet. Then the flavors finished off with a grapefruit bitterness.

The feel of this beer was quite balanced, as it offered a medium body, carbonation, and a medium lingering bitterness from the hops. It was nice and satisfying, but nothing which stands out too much.

Overall, I felt like this was a pretty good IPA, but it was fairly average and nothing really stood out to me. Though I would probably never buy this again, I wouldn't mind drinking it again if it was in front of me.

Had 5-6 cups poured from a keg and I was a fan of this Ipa. Not very expensive, a solid Ipa for the price I’d say. Definitely typical grapefruit and other bold, juicy, and citrus flavors. While it was not over powering either. Wasn’t a superior ipa but something I will get again.

Ok to be fair I only started drinking this beer after it lost its independence rating, because it was bought by one of the evil big beer companies. BUT it's an average IPA, not too bad , not too good, I wish I could have had it earlier

Relatively Inexpensive for An IPA..

Initial Classic Flavor IPA Profile But Overall Weak-ish Session IPA at Best With a
Highly Metallic Aftertaste, Will Not Revisit Unless Highly Discounted or Free.

Clear gold with slight head on pour. It’s just a clean IPA. Nothing especially noteworthy. Taste has a subtle pine/citrus tone. ‘Fruity’ it is not. I’d say a good entry IPA for someone coming from Lager-Land, but there are way more interesting IPAs out there-including from Goose!

Pours a golden straw awith a one-finger, white, fluffy head. Good carvonation.
Good citrus hop sell with malt backbone.
Not an awful taste. Citrus hop with malt balance and spice. A little of a medicine aftertaste. Sightly floral. Not a big taste, but better than I was expecting.

Taste: Initially fruity and relatively sweet, followed by a medium hop bitterness that fades within seconds and leaves little aftertaste.

Overall: I don't drink IPAs, but this is relatively pleasant thanks to balancing the bitterness with the other elements instead of letting it be overpowering.

8 month old bottle but held up quite nicely.

For the price you can't go wrong...

The taste is similar to Alaska icy bay ipa. It is a pretty good ipa for the orice. It is light and crisp. Not filling at all 5.9 abv.

Pretty mild IPA but still flavorful. Pretty consistent throughout from smell to flavor to color. It’s okay if offered it I’d drink it again but I probably wouldn’t buy it again.

From a can at Gillette stadium watching the New England revolution

Taste is floral hops over maltiness

On tap at Max and Erma's with my parents. Good average IPA. Good color. Decent body. Nice bite on the palate. Not bad door a big brewery offering now.