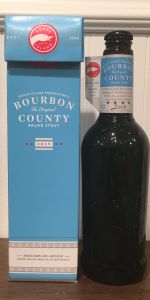 Notes: 2019 Proprietor’s Bourbon County Stout is an homage to some of the most beloved ingredients from Bourbon County variants of years past. Toasted pecans, coconut, cocoa, and vanilla mingle together to create flavors reminiscent of Tiramisu. Expect an aroma of dark chocolate, toasted coconut, and caramel to round out this decadent stout. We can't wait to share Proprietor’s with our most loyal fans in our hometown of Chicago.
View: Beers | Place Reviews
Reviews: 18 | Ratings: 61 | Log in to view all ratings and sort

A great set of beers from the hometown Chicago. We got both 2020 and 2019 Proprietor's BCBS up to plate. 2019: A rare find in late 2020 from a prior year stash. It draws influence from prior year versions with heavy focus on coconut and chocolate. This is the most "coconutty" stout I have had and is very sweet. The beer is pretty good but loses a lot of the BCBS base complexities.

This one pours a dark black color, with a small head, and not much lacing.

This has a really good balance to it - there's definitely a lot of coconut, but the barrel is allowed to shine through strongly, with spicy oak, bourbon, and a definite vanilla note. There's a vague nuttiness - not necessarily pecan to my palate, but a nice bitter balancing nuttiness. There's also a lot of sweet vanilla from outside of the barrel, and a really wonderful fudgy and marshmallow-ish base stout.

This is thick and creamy, with a good drinkability, and not much booziness at all.

This is pretty much down a fastball right down the middle when it comes to what I want from pastry stouts.

16.9oz bottle poured into a snifter shows a light free inky-black body with chestnut colored bubbles rising to an elusive, whispy island with no lacing.

Aromas and flavors of chocolate, cocoa powder, caramel, vanilla, oak, char, fudge, pecan, leather, and coconut all meld in a glorious elixir of tongue-coating creaminess. The bourbon and sweet balance falls clearly on the sweet side, as advertised, causing the abv to be dangerously forgotten.

Overall, the Bourbon County brand continues to develop their pioneering beer style and the results are, as always, angelic.

A: Classic, pitch black BCBS appearance. Was expecting to see some floaties with the coconut, but not too much here.

S: Oh man, so good. Huge chocolate and cocoa up front. Big chocolate cake/tiramisu vibe. Little bit of vanilla after that. Hint of coconut, not too much though. Surprisingly, not a lot of bourbon or oak. But even without it, this is still one of the best smelling beers I can remember in quite some time.

T: Hm, this is one tasty beer. At first, it was a bit cloying to be honest. I was hit with a big maple syrup/sweetness note and it was overpowering. But as I've let it warm, it's grown on me. Now tons of chocolate, cocoa, coconut. Rich vanilla cake. Faint nuttiness from the pecan, but not overpowering. Much like with the aroma, it's hard for me to tell that this is barrel-aged, and not just a super ABV Imperial Cake Stout.

M: At first seemed a bit thin, like some overcooked Props have been in the past, but after sitting with it, it's filled out a bit. ABV super well hidden.

O: Alright. Prop. As legendary as they come. It's really when GI brings out all the stops. Haven't dabbled since 2016. After two amazing beers to kick it off, I thought the maple syrup beers of 15-16 were very harsh. Missed out on the last two, but was super excited for this one as it seemed to be a culmination beer, incorporating everyone's favorite elements of past Props and BCBS beers. Hype aside, you still have to execute, though. Up front, the aroma really does kill on this. Such a great smelling beer. After some time warming up, the flavors really do shine. I'll say this is a super sweet, rich beer. But you should expect that from reading the ingredients. So listen, if you're wanting/expecting a super rich, over the top, sweet and tasty treat, then hell yea, this is it. Go for it. But honestly, if you're not in the mood, this could feel like the worst beer in the world. It's just not balanced to be a home run hitter in every environment possible. It's a novelty beer! Also, the bourbon note is super lacking, but hey, with this much candy-sweetness, what'd you expect? So yes I'm in a good mood, feeling like I deserve a dessert beer in these crazy times, so yes, this one nails it for me. Another year, another Prop, another amazing beer.

Recommendation: Prop has earned the reputation by now. Do yourself a favor.

Excellent barrels, the pecans and chocolate are the stars, but the vanilla is sneaky good. This is one of the best Prop’s.

Poured hard and produced good head that dissipated quickly. Smells like booze, coconut, and vanilla.
Tastes like a great blend of coconut, vanilla, and pecan. Nothing overpowers one another making easy to appreciate each flavor and they all work well together. It is a touch sweet, would be great to share but I had no problem finishing the bottle. Creamy mouthfeel that coats your mouth. Pretty solid and I think it will get better with age.

This beer was outstanding! Deep and rich chocolate, coconut, caramel, & pecan. Nice light bourbon finish. Drinks well below the abv. Dangerously smooth. Its been a while since I have really enjoyed a bourbon county variant this much. well done for sure.

WOW! Amazing Prop for 2019. It hits all the notes. A symphony of flavor on the palate. Smell is amazing, mouthfeel as well.
Cannot wait to see how my second bottle ages.

This was a nice amalgam of recent vintages; a bit sweet, as expected, but not cloying. A nice one to split with a friend.

One of the best years. I haven’t tasted a fresh bottle in a while, all cellared. Multilayered chocolate, cherry, oak, sugar, dried fruit. Great beer!

Black with a tiny bit of tan head, smell is mostly fudgy/chocolate with some vanilla and oak and a little bit of coconut. Tastes pretty sweet, with vanilla up front, chocolate in the back, and a subtle nutty pecan taste throughout. Didn't really get any coconut in the flavor, even after it warmed. Really good, glad I got two.

The beer pours a nice jet black color, thick and viscous with a motor oil consistency that offers a finger of loose caramel colored head that recedes immediately yielding no film nor lacing. The aroma is pleasant, nice marshmallow and vanilla bean, chocolate, soft bourbon, nice charred wood, toasted oak and pecan with a light coconut character. The flavors are good, sweet marshmallow and lots of chocolate, slight toasted coconut and pecan, charred oak and bourbon spirit, a bit hot and spicy with loads of rich grains that linger. The mouthfeel is good, coating and smooth heavy body, luscious and finishes easily with a nice warmth.

Verdict: A good adjunct version of Bourbon County from Goose Island. It's a bit matte flavor wise and the balance isn't so great. It's certainly a rewarding beer but it does leave a lot to be desired.

Had on tap. Classic viscous black body with a thick tan foam collar. Bourbon, fudge, caramel, vanilla, and an assertive candied pecan near the finish with some wood and coconut mixed in. Boozier nose than taste but plenty going on. Classic bcbs bourbon, cocoa, and slight wood upfront, then big vanilla and pecans before rounding out into a caramel and coconut smooth finish. Has a praline like high note before finish. Less boozy and bitter than nose. Feel is crazy smooth, classically boozy, viscous but not too heavy, really thins out into slightly frothy by finish actually. Barrel candy!

Note had again and bottle and actually better than on tap! The wife loves it

Tasted on draft at Prop day. Very nice. Thick black and chewy. Lots of cocoa on aroma and taste. You get a nutty flavor with some vanilla and a little coffee. No hint of high abv. Very smooth. Excellent.

The Proprietor’s blend this year was made with coconut and almond and some pecan. You can really smell and taste the coconut but it was not really as over powering as I thought it would be. That said this was sweeter than I thought and it had a candy bar like quality to it.

Media sample at a tasting in NYC. Big luscious stout aside from the lovely pecan character that comes through in both the nose and the palate this brew tastes like a big slice of Black Forest Cake. Quite wonderful to sip.