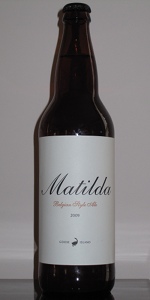 2009 vintage, nearly four years old. Thanks, Kevin. Matilda pours a foggy copper outlined with some lighter brushings of amber at the edges. Though at first glance it may appear completely opaque, it has the lightest bit of translucency as I can see a faint silhouette of my hand on the other side of the glass. No head - just white, wispy collar. Not a huge surprise given the age of the brew.

The aroma is quite a bit different than I was expecting, but nearly better in every way. Heavy notes of dru, musky funk and an undeniable barrel-presence that oversees the whole process. Damp cellar, dirty cobwebs, and barnyard floor all come to mind when sniffing this funky brew. It's not without it's tart offset, though - generous helpings of lightly acetic vinegar, harsh apple skins, and lemon juice add a touch of tartness and combat the funk for center stage.

I'm already pretty impressed with the aroma, and the first sip keeps things rolling. A substantially dry and cheesecloth-y funk is the first flavor to run out of the gate, but it's quickly followed up with abrupt apple skins that play the fine-line between tart and astringent just a bit. Lemon, vinegar, and heavy tannins play hard mid-palate and add nice complexity to this Belgian style brew.

Matilda is pretty damn spritzy and effervescent on the palate, biting the tongue on all sides and really projecting the flavors forward with each and every sip. The nice tart spikes that sift through the mostly-funky static are really enjoyable, especially considering that I wasn't expecting much of anything from this beer. The finish is full of more tannin and dry oak, making the barrel-aging known and clearing your palate for each successive sip.

Very nice brew. I haven't had one fresh, so I don't know what four years has done to this brew, but I was pleasantly surprised by it. Quite a nice mixture of funkiness and tartness, never leaning too heavily towards one side, though the funk may have the lead by just a nose. If you've had this fresh and didn't like it, I recommend sitting on it for a while.

Just realized that somehow I never reviewed this one. An excellent example of the style. I like this one with at least a year on it to really bring our the Brett flavor. I call this the poor man's orval

Bottled on 2/18/2011. This was among an awesome stash of brews that a couple of fellow dog walkers just gave me because they'd had them lying around and didn't want. Great for me.

Bomber poured into a Dogfish Head tulip. More coppery orangish type color than I was expecting with a huge head which gradually dissipated.

Spicy but not overwhelming smell.

Taste is outstanding with a carnival of spices dancing in my mouth. Seems like a Belgian Pale crossed with a Saison.

Feels great in the mouth. I may try a younger version of this in the future just to test how much the aging impacted my impression but I like this a lot.

Got some ones in USA and Mexico. Difficult to find in the South.
Looks nice, copper/bronze red colour.
Fruitful smell, Belgian yeast.
Taste sweet and sour, nice body, one of the best from Goose available far away from Chicago.

Another great beer in the line of Goose Island's Big Beers. Good aromas of Belgian candy and barley malts. Transfers to flavors along with over ripe fruits: oranges, plumbs, and berries. Has some slight hop bitterness and flavor. Spicy coriander, cloves, pepper, and allspice. Some organic, sour, or earthy flavors ride underneath other flavors, these resemble Trappist Orval. Its a good beer, but the flavors need a while to come together.

Out of the 750ml and into the Maredsous chalice like a king at supper.

Quite nice. Not nice like seeing a Victoria's Secret receipt on your girls kitchen table "nice," but nice enough. The appearance shines bright like an apricot tree while on acid, yet that's more or less the highlight of the experience. Like your last ex, flavors are there, and they're not, and the mouthfeel is a bit watery.

Appearance: Golden honey in a glass. Finger to finger and a half of head that left no lacing and after 15-20 minutes dissipated almost completely but looked pretty while it lasted. Gained more of an unfiltered pale ale nectar like appearance after I poured the dregs.

Aroma: Plenty of clove and sweetness immediately on the nose. Smells more hoppy than your typical Belgian style but offered nice sense of balance between malts hops and yeast.

Taste: Really clean and Belgian like similar to a hoppier tripel. The hops made more of a presence before the dregs were poured but were replaced by spice aromas afterwards.

Overall: After the dregs were poured in I feel the spiciness and depth of body was thrown off but still good in my opinion however next time I will probably drink without the dregs. I am a fan of this beer and brewery and will be getting this beer again.

L: Pours a brilliant clear and bright copper-gold with hints of red, and small white head and several fingers of lacing on the glass. This is a very nice looking beer.

S: The Belgian yeast is forefront, strong notes of pepper and clove, mix with a light piney weedy hop and a light crackery malt underneath, I don't detect a lot of the Brett mentioned on the bottle.

T: The Belgian yeast hits first with a strong pepper, followed by some clove and lemon, some light piney and weedy hops mix in with some light crackery malt underneath.

O: I really like how this beer showcases the Belgian yeast, a very nice Belgian styled beer.

765 mL bottle picked up at the LCBO; bottled June 27 2014. A friend shared a bottle of this with me in May 2013 (originally submitted as a 'had'), but I neglected to post a review at the time. I enjoyed it enough to consider it worth revisiting. Served at cellar temperature.

This one foamed up a bit when I popped the cap, but in more of an 'oozing lava flow' manner than an 'angry geyser' one. Once it settled down and I got the pour off, I was presented with a hazy golden-orange coloured brew, with visible floaties slowly hovering through the liquid. The white head is dense; about a half-inch thick and quite creamy-looking, though not very long-lasted at all. After only a few minutes, it has wilted into a filmy cap and thin collar, with some spindly lace strands left clinging to the glass. Not the most visually-appealing BSPA I've ever looked at, but the aroma gets things back on track - some musty, funky acetic tartness is the most noticeable facet, but this is merely the loudest voice in a chorus. Notes of lemon, wet hay, apple skin, apricot, bubblegum and floral hops combine to produce a seriously enticing bouquet.

The flavour profile is similarly complex, with a nice blend of orchard fruit notes - including red apple, orange, pear and apricot - starting things off smoothly. Candi sugar, bubblegum and a vague hint of banana are next in line, alongside some grainy, doughy malt goodness. The latter half of the profile is dominated by funky, tart acetic notes, with grassy hay and accents of lemon citrus peel, clove and yeast. Finishes relatively dry, with a slight tinge of ethanol - not exactly noticeable enough to be outright warming, but detectable nonetheless. Medium-full in body, with weak carbonation levels for the style - this is not a feature I recall from my last sampling - possibly a characteristic of this year's batch, or maybe just a storage/handling issue. Regardless, the beer itself tastes fine.

Final Grade: 4.07, an A-. Goose Island's Matilda is an interesting strong Belgian pale ale, but in my opinion it doesn't compare with the real titans of this style - and having had two bottles of this from different vintages, I feel pretty comfortable stating that. The Brettanomyces provides a unique background tartness, and overall I must say that I do really enjoy this beer - but it's still no Duvel or Don de Dieu. Pretty good stuff; there's no doubt in my mind that I'll be drinking this again at some point.

Appearance: Poured from the 12 oz twist off bottle into a red wine glass (couldn't find my goblet). The red wine glass is oversized, yet only holds about 8 oz of liquid. I get maybe only half that in the glass. The other half is all foamy white head. Head takes a lot of time to die down (never fully leaving). Leaves only little patches of lace which allows me to justify this from being a five (I like the look that much).

Taste: Yeasty/bready/malty with a touch of acidic fruit. A bit boozy with a faint bitterness and sour/tart finish.

Drinkability: I purchased a four pack which is ok, because that is about all I want. A nice treat and worthy of trying out at least once.

Fruity and yeasty aroma with a bit of clove and black pepper.

Mouthfeel is a bit light for the style but it works.

This is a very good beer. Congrats to GI yet again for another job well done.

Poured from a brown 12 oz. bottle. Has a cloudy caramel color with a 1/2 inch head. Smell is bursting with fruits, yeast. Taste is good, fruity, malts, yeast, very rich. Feels full bodied in the moth and overall is a top quality beer worth seeking out.

Appearance: Autumn orange with a thin cap.
Smell: It smells sweet and tropical.
Taste: Sweet and fruity taste and I am getting some banana.
Mouthfeel: Some carbonation on my tongue.
Drinkability: I think this is easy for me to drink.

Look is orange-amber, with a thin slick white head. smell is musty Belgian wheat. Some lemon as well. Taste is similar: Belgian dank ness, spiced with a lemon component.

Enjoyable beer that I would order again, but it's not worth seeking out.