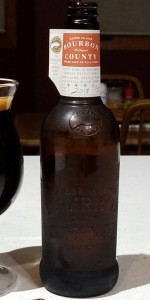 500 ml bottle poured into a goblet

A- Black with a small fast fading mocha head.

O- I really enjoy this a lot. Reminds me a lot of Midnight Orange with coffee to balance everything. Goose Island did a great job with balancing all the flavors in this beer.

First impression - it’s an amped up version of central waters cassian sunset, bigger body, bigger flavors but really similar overall. The cassia is really present, orange is more of an aroma note. Glad to try it but not something I’d be clamoring to have again, especially at these prices (24$ for a 16.9oz bottle).

8 oz draft served at Gerst Haus Evansville in a half pint glass at fridge temp. The beer pours dense black with medium brown head. The head recedes to a pencil thin ring and a few microscopic bubbles. The aroma is pleasant with bourbon, coffee, chocolate and roast malt. The taste is rich bourbon, coffee, orange & chocolate all mixed together with a mild to moderate bitterness. The mouthfeel is full bodied with less than medium carbonation and a semi dry finish. Overall, excellent. No trace of the high ABV here. Absolutely delicious and hard to keep from gulping. Bottled variants are nearly impossible to score here, but this restaurant gets everything on draft. They serve it cold and in the wrong glass, but I'm still great full for the chance to try it.

Note: As this warms I'm picking up a lot of cinnamon (cassia) and the orange is more pronounced. Take your time with this one BA.

I'm not a cinnamon fan, so perhaps my defenses were down, but this was surprisingly drinkable. Not a mind-blower, but worth a quaff.

The orange is not noticeable at all to me, but the cinnamon bark is and is a nice compliment. The coffee is still most prominent and just as good as in any of the former coffee versions I remember. The sugars are just over the top. It’s very granulated/gritty to me. Reminds me of the sugar in a homemade fudge. It’s too sweet and takes away from what would be one of the better variants.

Notes via stream of consciousness: So this is made with coffee, cassia bark, orange peel, and panela sugar added. I don't even know what cassia bark or panela sugar are so I'll have to look those up - cassia is a kind of cinnamon, and panela sugar is an unrefined cane sugar similar to palm sugar). It's poured an opaque black body beneath a finger's width of creamy dark tan foam. Unfortunately the head seems to be dropping fairly quickly, but at 13.5% ABV I'd imagine that'd be the case. The aroma is richly chocolatey with an almost equal component of coffee and nuts backed by a mild mix of cinnamon and coconut. There's a little bit of that kind of raspy note that fresh, oily coffee beans have. I wonder if that's what eventually comes out as green pepper in aged coffee beers. Anyway, it's rich but it's not really that complex. Ahh, maybe I take that back, five components is pretty damned good even if two of them are mainly background notes. On to the flavor... it's more complex than the aroma with both the cassia and the orange peel coming through clearly. In fact, I think the orange peel is even stronger than the cassia. At first I got the cassia lingering more in the finish but now I get the orange just as strong - they must've used a lot of orange peel! There's also a fuller chocolate character that has a lot of milk chocolate to it, and some coconut, and along with the orange it seems almost like a piece of orange-liquor filled chocolate candy. It's not as sweet as a piece of candy but the flavor is there. Apart from the coconut note I'm not finding a lot of Bourbon barrel. There's a hint of Bourbon, which really might just be the alcohol coming through, and a tiny bit of oak but not enough that I'd immediately think it was barrel aged. It finishes with the sugars fading while the orange and spice and some mild ashen roastiness rise up and then linger. The alcohol comes in at that point and that really helps to dry it and re-set your palate for another sip. It's definitely a sipper though, even if you're set for another sip there's so much there that you need to take a moment, just like you would with a rich barley wine or strong Scotch ale. In the mouth it's full bodied and oily with a gentle tingle of carbonation upfront and silky smoothness following. So what to say about this one? It's a very rich and full beer which kind of automatically puts it forward - not that that's necessarily the way that it should be, but that's the way it is as long as it's done well, and it's very well done. The alcohol doesn't come forward or stand out any more than expected, and it's really nicely balanced in every way. It's also unique. I've had Imperial stouts with chocolate and cinnamon before, but I've never had one with orange added; and on that note the orange really wakes it up and livens it. It's expensive, I'll say that, but I'd buy it again. I wish I had another bottle for after dinner on Christmas day, but at the same time I'm sitting here on the last Saturday before Christmas with the house to myself while the ladies are shopping and I can't imagine another beer that I'd rather have right now.
Review #6,864