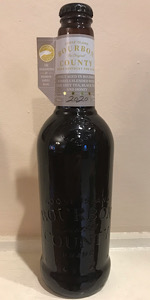 Notes: We’re excited to debut our first-ever tea-inspired variant. Brewer Paul Cade brought this idea to life, inspired by his girlfriend, Martha, who prefers tea over coffee. Our Bourbon County Kentucky Fog Stout is a take on the London Fog tea drink. With that flavor profile in mind, we added Earl Grey Tea and Black Tea from Kilogram Tea, as well as clover honey from The Honey House, to make a Bourbon County Stout variant with a complexity like none before. Trust us, you’ll just have to try it.
View: Beers | Place Reviews
Reviews: 57 | Ratings: 143 | Log in to view all ratings and sort
Reviews by thebeers:

Pours a ruby-hued, near-black color with an overly-massive dark tan head that’s much longer-lasting and rockier than other BCBS I remember. It leaves clumpy, stringy webs of lacing that are damn impressive.

Huge Earl Gray in the nose — dried bergamot, earthy tea and a kiss of honey sitting on top of some light chocolate and bourbon with vanilla. There’s a whiff of alcohol, too.

Chocolate, vanilla, bergamot and strong alcohol stand out first in the taste. There’s some underlying earthy, honey sweetness as well. A cola impression, too. A flowery finish gives way to lingering herbal bitterness in the aftertaste.

Oily feel on the thick side of medium bodied. Fairly sharp carbonation.

This one is definitely an odd duck. Others have called it polarizing, and I can see why. To me, the Earl Gray comes on a little too strong. I’m gonna guess allowing this to mellow for a year or three will dull the intense citrus and make the flavors meld better.

I’ve tried one of the other variants from this year, and this one is more like it. Flowery on the nose with a bit of abv and some medicinal notes — nice balance; sweet on the palate with some great tea notes — maybe the only weakness is it’s a bit too sweet and could use some toastier darker notes for balance IMO; overall a solid beer though. This is more of a sort of tea paste stout IMO

Pours a deep black color with a generous size of dark tan head, looks quite appetizing. The head does fade quicker than I would like.

Aroma is quite sweet, a little boozy, maybe hints of tea, although it's hard to know if I am just imagining that aspect of it. I was surprised not to get any classic 'stout' aromas (i.e. roasty, chocolatey, etc.)

Taste is far sweet than I expected, can definitely tell that they added honey to this beer. The earl gray tea addition is quite apparent in the flavor. Again, besides the booziness, not much 'stout' flavor to this beer--the honey sweetness and the tea dominate.

The mouthfeel is nice, despite the very high sweetness, the feel is only slightly sticky. The body is surprisingly medium-ish.

Look: The beer pours opaque, black and dark brown around the edges. Dark brown head that disappears. No lacing, but the beer’s got some legs and it does coat the glass. No visible carbonation. Looks like a big stout.

Smell: A base of sweet bourbon, vanilla and oak. Cold out of the fridge the tea and honey come through as lemon and, well, honey. Tea with lemon and honey. A little warmer, about 20 mins after pouring I get a lot of bourbon and the earthy tea notes pop more. They are floral in nature and remind me of lavender, lemon verbena and fresh pine. The smell gets very chocolatey as it warms more, about an hour later. This masks some of the brighter earthy notes that are floral and citrusy and gives way to sweet, fruity notes like cherry cordial, sweet coffee, and raisins.

Taste / Feel / Overall: Up front the prominent flavors are sweet chocolate and cocoa. There is raisin and date. I’m not sure if this is the stout, the barrel or the tea. But there are some nice dark fruit notes to the beer. Then the tea. What does the tea do here? It doesn’t go tart but there there is a dry, lemon pithy note. It’s herbal, spicy and perhaps a touch bitter. This is one of the more unique BCBS beers I’ve had. Really one of the more unique beers that I’ve had. The tea has a big influence on the beer. Herbal and spicy. There is some heat to the feel. It’s full bodied and coats the palate. Lemon verbena, licorice, anise come to mind. The combo of flavors reminds me of beers with Amburana and Palo Santo, like Bamburana and Palo Santo Maron. I don’t think this beer is as intense, and it’s brighter with the lemon notes, but I think if you like those beers you might enjoy the herbal and spicy notes here in the Kentucky Fog.

Tar black with a moderate mocha head that foams down to a short ridge.

This had to be expected to happen sooner or later, especially being so closely associated with Dark Lord Day shenanigans, but the combo of barrel, Earl Grey and honey creates a uniquely floral note that's almost like cardamom, verging dangerously close to Temeculan 3000 or The Earl of Biggleswade territory. When the honey combines with Earl Grey it makes an almost lemony-mintiness, which then further translates to that floral cardamom note, most especially on the nose, where it literally dominates, except for maybe some char.

In flavor, it's a little more subdued, but still the dominant presence. You'd expect something delicately floral to take a backseat to the assertive potency of a huge barrel aged stout like BCBS, but here the barrel char and stout roast are the second class citizens. It even begins to turn to anise, becoming a black licorice beer throughout much of the session. As it warms, more stout chocolate and barrel char develop, which I think is the support system that persistently exerts the redeeming qualities throughout the experience, however hard they are to detect early on.

The roundly silky smooth medium body's soft fizz sharpens, cutting to a stinging semi-dry heat where hints of vanilla and cinnamon come out on the exhale. I'm really impressed how tingly its effervescence remains from start to finish, moreso than any other BCBS variant.

Overall, I didn't hate it, and kept coming back to it with intrigue. While it meets the high quality widely expected of it, it's a very, very unique beer that is bound to be very divisive.

Goose Island Bourbon County Brand Kentucky Fog Stout, 14.1% ABV. Pours black and thick, with a one-finger head that left no lacing. Nose is bourbon, honey, and tea, taste follows with some sweetness and light bitterness, with some bourbon burn. Excellent mouthfeel, overall outstanding. I'll adjust my review as it warms, based on other's observations. A tea beer is a bit odd, but it works. I'm liking it a bit more than the #4 Oatmeal.

16.9% oz bottle poured into a snifter shows a black body and brown mixed bubbles almost form a 1/8in cap but collapses into the ether. Agitation brings forth voluminous tiny racing bubbles that safely return to the body leaving no remains on the glass.

Aroma has all of the base stout notes including cocoa, booze, oak, and maybe vanilla, and are joined by tea.

The flavor is clearly BCBS, if light on bourbon, but the honey infused tea leaves is a nice touch and seems to highlight stone fruit notes.

Mouthfeel is also a match to the base beer; smooth and creamy, yet virtually no booze warmth, sadly.

Overall, I am not a tea drinker, but I would choose it over coffee, if forced to choose between the two, and in BCBS, a great experiment.

500 ml bottle poured into a goblet

A- Black with a small mocha head.

O- This is a strange and fun one from Goose Island but doesn’t live up to other BCBS variants. They did a great job with the tea flavors but they kind of clash a little with the stout more than most of the other adjuncts that they have done the past.

Poured into a snifter with a dark brown almost black color, minimal head.

Tea and honey were the prevalent aromas I got, with a hint of the barrel.

The taste is a little mottled for me and didn't seem to match up completely with the smell. The tea seems to bitter the taste a little and overshadow the honey and barrel. I think it takes some getting used to as this is something completely new. The honey does show up on the back end to mellow that bitterness a little though.

Mouthfeel is typical of BCBS, which I think gets the viscosity where it should be.

Overall, I'm torn. It has some good qualities, but it's just not a home run. If I were to try it again, I think I would like it to have been on the shelf for a year or two.

Poured into my 10 oz Bourbon County Snifter. Really torn on this one. Came into it expecting Stout, which is probably my mistake. One taste made me realize it’s ‘kinda Stout’, disguised as an imperial Porter. Once I let my expectations go and let the beer speak, I came to realize the ‘No Rules’ attitude of craft beer is on full display here. It’s completely different, it’s a tad perfume-y, a little too sweet, loooong finish, it’s slightly bitter, alcohol burn made my cheeks flush. Two minutes after a sip, my mouth was still watering. Right fine happy buzz too.
So.,.
If this was a blind taste test, not aware it’s a BCBS, I’d be blown away by the originality and strength - but not knocked out by how one-note it is.
Got another put away and will see what develops in 6 months.
Cheers!