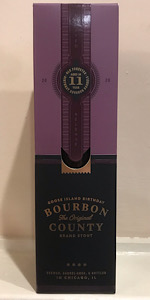 Notes: Old Forester’s Birthday Bourbon is released each year on the birthday of founder George Garvin Brown. The bourbon is chosen from 11-year-old barrels and all of the bourbon is picked from one specific production day. In 2019 the bourbon was described as “rich oak spice and blackcurrant coupled with light maple, caramel cake, and white floral notes.”

Those are the barrels that housed Bourbon County Stout for a year and produce a variant with berry, maple, chocolate, and vanilla.

Reviewed by dafla67 from Pennsylvania

Feel is thick (but not overly thick), smooth, velvety. Moderate carbonation. Semi-dry finish. Slight heat on the back end.

Pours a clean, inky black body, forming a sliver of tentative khaki-colored foam before quickly dissipating to a slight, frothy collar isolated against a void-like surface and nonexistent lacing on the walls of the glass.

Aroma opens to nutty oak toying with a firm malt base into cocoa fudge with subtle layers of caramel pound cake advancing over the middle; burnt toffee barrel accents contrast dark fruit on the back end, highlighting brief blackberry/black currant esters as charred maple continues perpetuating a persistent bittersweetness into the dark chocolate bookend once more detailed on the close.

Taste offers burnt chocolate cake crust laced with bourbon to peak on a wispy, oatmeal raisin cookie note, in turn continuing to highlight a dark fruit undertone over the mid-palate; slight date and fig into the back end is cut with a distant maple sweetness while a surging oak barrel imparts a touch of smoked toffee to the finish.

Mouthfeel features a body on the higher end of medium, with minimal carbonation and an oily density; the unabashed boozy punch proceeds adjacent to the slick, steady texture, building to a subtle warmth through the mid-palate; the back end is briefly sticky, though accents of mild char see drying on the finish.

A committed barrel profile is burly and intense, layered with an amalgam of deftly textured baker's sweet/bittersweetness; the pronounced dark fruit flair takes this stout to the next level as a top-tier sipper, an access point to the subtly fluctuating variations in the interaction between stout and hand-selected barrel.

Reviewed by dave_ackbar from Hawaii

4.74/5  rDev +4.6%
look: 5 | smell: 4.75 | taste: 4.75 | feel: 4.5 | overall: 4.75
Looks like a dark dark roast thick coffee.
Smell is definitely a strong bourbon aroma.
Taste is a nice warm sip with the burn following
Feel is thick like a watered down molasses
Overall it’s very good, although I prefer the regular bourbon county because of the price point.

4.6/5  rDev +1.5%
look: 4.5 | smell: 4.5 | taste: 4.75 | feel: 4.5 | overall: 4.5
Very nice bcbs variant, looks and feels like the original. Black viscous body with boozy smoothness that defines the series. Smell has plenty of dark fruit to go along with the chocolate, molasses, vanilla, oak, and bourbon. Taste has more caramel and a touch of earth and cola than the orignal, dark fruit is wonderful, really stands out in the series, pairs wonderfully with the expressive bourbon barrel. Second best of the 2020 behind anniversary. The wife loved it
Apr 06, 2021

S: Aroma is dark fruits with currants and blackberry, fusel alcohol, roasted malt. Barrel characters are present but honestly not particularly prominent, which is a bit surprising, mostly char a bit of peat, I’d be lying if I said the barrel notes were any more desirable than regular BCBS. 4.25

T: Tastes sweeter than most bourbon counties, more dark fruits like dates. And unlike the nose the bourbon characters are stronger. Charred oak and some bourbony smoke. The barrel characters are not terribly complex though, like I compare this to the somewhat predecessor BCB Reserves and feel like both the 17 and 18 had much more well-defined unique barrel notes. Base beer characters of roasted malt are strong. Fair amount of astringent bitterness, I do feel like nearly ubiquitously that BCBS and variants are better with some age, I assume the same is true for this one although I probably won’t seek out another bottle so may never find out. 4.5

M/D: Mouthfeel is smooth, full bodied but nicely drinkable, as above an astringency gives it a bit of a harsh character, alcohol noticeable but not negatively so. 4.25

O: Overall, this is an excellent beer don’t get me wrong, but IMO it’s just not that different than regular BCBS, certainly not to the point the justifies it’s difficulty in obtaining. I would drink this any day of the week, but considering the hoops I had to jump through to get it and the fact that I could literally walk into the local bottle shop and buy a case of regular BCBS today, I think I’ll just go for the latter moving forward. 4.5

Reviewed by StraightNoChaser from Georgia

There's definitely that baker's chocolate, but in conjunction with aged dates, conjuring up an exhale that is rich, mature and delectable of formidable char softened by Riesen and caramel drizzled brownie. Second visit becomes a little more peppery and spicy, making this take a little more assertive and chewy than Anniversary, while still amazingly complex.

The slick but round medium body has a lightly sharp, cutting carbonation that comes to a surprising powder dryness in the swallow. Each sip is always more mature and aggressive at the start, verging every time into a softly sweet and warming middle and end featuring a hint of brown sugar. The exhale further develops campfire softened coconut marshmallow as it warms.

This is a super dope take on Bourbon County - I really appreciate the emphasis this year on no adjunct single barrel variants. It seems to me (as a bourbon non-aficionado) that Birthday is a fairly fruit forward bourbon - I get dried/bittersweet strawberry or blueberry here, which leads to a long tobacco and rye-spice like finish. There's the typical bourbon county char, marshallow, and vanilla, and lots of fudgy goodness. I also get a hint of maple.

This is medium bodied, silky, and with not too much booze to it. I think this will likely age quite well.

I really dig the idea behind this, and obviously I quite dig the execution.

Shared with Matthew, Derek, and Jay around a pre-spring fire.

Perhaps a bit more than the usual viscosity in the appearance.

The aroma clearly surpassed that of the standard BCBS.

Thick and lovely. Subtlety and grace which easily outclasses any BCBS variant I have had in the past several years.

This bottle carries a steep price tag and is not easy to acquire, but it definitely delivers.

Reviewed by JohnG190 from New York