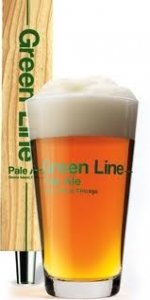 Carbonated, citrus, golden toasty urine, bitter puckered aftertaste, sweet and innocent burp, sip from the center of the mouth, co-dependent/ food-friendly beer, sweet and refreshing after spicy food without becoming less complex and true to itself, is this medium-bodied?, this grew on me immensely but I'm looking forward to finishing it.

Rather grainy, not much of the advertised hop expression. Honey, straw, a touch of caramel grains, wheat (flavor), biscuit, cracker, grass, light touches of citrus and pine.

Overall: Kind of a weird beer here, :/ Mild would be the word to describe it. Almost every aspect of the beer seems attenuated. Aroma, flavor, hops, bitterness, are difficult to perceive. Malts are really the only appreciable aspect. It could definitely use more of a robust kick for a pale ale. Drinks more like an adjunct American lager. Definitely prefer the 312.

From the bottle, it pours a nice amber color with an off-white head that stays for awhile. In the nose, it is lightly bitter and malt. In the mouth, it is mostly malt with a little bitter.

Complete crap. Calling this an APA is a joke. It tastes like a bland run-of-the-mill lager. No discernable hops. I thought there'd been some mistake, but the bartender assured me that's just what Greenline was. $12 wasted at the airport. Yuck....

Poured from a bottle into a pint glass. Pours orange yellow with a small white head. Smells of light grain, but weak. Tastes of piney and floral hops, nice balance. Beer is light bodied and very easy drinking. Overall, an above average beer.

This beer used to only be available on tap around the Chicagoland area. It will always taste like a concert or bar to me, and perhaps it would rate higher if you think of it in that context. While technically a Pale Ale, it has a distinctly lager-like quality, and actually reminds me of a slightly fruitier and hoppier version of GI's seasonal Preseason Lager, a Vienna Lager, which this beer's color also resembles. Earthy bitterness on the finish, which suggests a noble hop in the recipe alongside the citrusy American hops. Very sessionable, with bready, caramel malts taking backseat to earthy and tangy hops. Goes well with food and concerts.

This was a complete disappointment. Not hoppy. Not tasty. Super flat and no head at all. Tastes like a flat Budweiser. Someone before said that it was abusive to the consumer and I completely agree. This is down right one of the worst beers I've ever tasted.

Honestly, its abhorent. I've had it twice out of the can and it only gets an almost pass because of its half predecessor.

If the Kwikie Mart has Busch or bathwater, you'll be better off.

It's lazy and abuses the clientele.

Pours a lovely, translucent straw gold with a one inch, off-whited head that slowly dissipates. Nose expresses light fruity esters and grassy notes. Taste is primarily crackery malts - not much of the nose is detectable in the flavor profile. Mouthfeel is light in body with an assertive carbonation and a crisp, semi-dry finish. Overall, a fairly drinkable APA. Not much complexity but it pairs well with food.

Dayyyymn I got fooled on this one! Came to Bub City BBQ in downtown Chicago for the Nashville Hot chicken. Saw Green Line and confused it for Greenbush out of Michigan. This is wayyyy mediocre compared to anything they put out. Turns out it's from Goose Island so that's some deceptive marketing bc nothing GI is on the tap handle.

Anyway, just another plain Pale Ale with that slightly hoppier than Bud feel and flavor. Meh. Chicken was great though!

Golden colored beer with citrus and bready malts. Easy drinking and flavorful ...overall a pretty good beer that I think that should be given at least one try.

Pours a light amber from a twelve ounce bottle into a glass the same temperature as the beer. One finger head. A little hazy with some lacing. Easy on the nose with some some light citrus hops. Little malt. Sort of reminds me of a light beer. Nothing in the flavor that stands out. Small hops and small malts. Finish leaves some lingering citrus (grapefruit rind?) bitterness on the palate. Not a bad beer overall. A little too mild on the nose with a watery thin mouthfeel. A drinkable beer but nothing outstanding.

A - Clear straw with a 1-finger white head and decent lace.

S - Biscuit and mild citrus. Not much going on.

Aroma: Faint on the nose. Sweet with notes of baked cornbread, brown sugar and caramel. Not much in the way of hops.

Taste: Watery, not very flavorful. Has a dry, slightly bitter, but mostly sweet flavor of savory caramel candy and malted grains. Some notes of vanilla, honey, orange zest and ginger hiding throughout. Almost like a pumpkin ale sort of thing going on after a while.

Overall: Sampled out of Goose Islands "Flight Case" variety pack which offers several of their flagship beers (312 Wheat Ale, Their Standard IPA, and Four Star Pils). Their Green Line Pale Ale was probably my least favorite so far, it lacks character and has very little body. That being said it isn't offensive to the palate or anything, it's just not something I would repurchase in the future.

A pretty mediocre pale ale that seems to be more like a lager. Aroma is slightly floral. Taste is a little citrus, too much malt backbone and a bit watery. Finish is a bitter watery feel and this is a miss as far as being a tasty pale ale

Pretty average. A little lemony and watery. Refreshing an easy to drink but this isn't one that I would turn to simply because there isn't anything that stands out.

Pours a very nice amber/golden color with one finger of a soft, creamy and fluffy white head.
The smell is pretty simple with some citrus and some light flowers coming up to the nose.
The taste follows the nose with that sweet citrus and flowers up front. A bit of peppery flavor hits about mid tongue with some nice sweet malt back bone balancing the hops as they all play about.
The mouth is fairly light with a very crisp finish.
Overall this is a very well crafted beer. The back of the label will even tell you the exact date the beer was bottled on. And that type of information can be very useful.

Poured from a bottle,into a Cigar City pint glass.

On the nose I get mostly roasted malts,with minimum citrus notes.Not realm much of anything on the nose.

On the palate I get some bright citrus up front,with toasted malts on the back end.Not bad but it tastes more like a lager than a pale ale to me.

The body is thin,with a smooth finish.

Fine for what it is, which is a craft beer for the populist crowd. There are no standout flavors but nothing is "off", it's a nice option to have when you want something easy but a step above macro.

Aroma was similar to a lager - bready with some slight hop notes coming through. Taste was light and sweet, hoppy with some fizzy carbonation (a bit too much carb imo.) I am assuming they used a British Ale yeast for this cuz there was a little butterscotch note on the middle tongue. Herbal/earthy hops bittering, a thin malt backbone with some hops on the finish. Reminds me of Goose Island IPA Light. Reminded me of a London Pride with a bit less maltiness. Overall a decent pale ale.