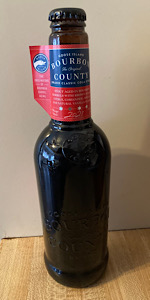 Notes: Pushing the boundaries of barrel-aged stouts is in our DNA, and with that, we brought to life our first-ever cola-inspired variant. Brewers Paul Cade and Jason Krasowski bonded over their love for classic cola while creating the Classic Cola Stout. Combining the refreshing nature of classic cola and picking up the flavor profile from a whisky cola, we added lime and orange juice and zest, plus coriander, cassia bark, nutmeg, brown sugar, and vanilla to bring out the complex characters of the classic drink. This is the ultimate twist on a whiskey cola and a must-try for Bourbon County Stout, cola, or whiskey/cola lovers.⁠⁠
View: More Beers | Place Reviews
Recent ratings and reviews. | Log in to view more ratings + sorting options.
4.25 by mjpolzin from Wisconsin on Sunday at 09:33 PM
4.17 by Burgy from Minnesota on Sunday at 03:55 AM
4.31 by EMV from Pennsylvania on Saturday at 07:24 PM
4.5 by eawolff99 from Minnesota on Jan 13, 2022

Deep brown/ruby pour--somewhat darker than cola. No head to speak of. Had a 2021 vintage very fresh--usually I like to age these BCBS's for a few years, but couldn't resist. It is sweet and very cola-esque, but in a beer with many ingredients, the flavor was dominated by vanilla. I did expect more complexity given that ingredient profile. And there were a couple sips where booziness snuck through (another great reason to further age these!). Pleasant, smooth, but not quite up to the level of other Bourbon County efforts.

Pours pitch black color with a 2 finger thick brown foamy head that faded in average time while it made crackling sounds as it dissipated and left basically zero lacing. Smells of brown sugar, twigs, bourbon, orange peel, Coke or any other cola soda, vanilla, caramel, grains, earthy notes, the outside of a coconut and tree bark. As it warmed it did resemble a cola, but there were a lot of odd aromas in the nose which I could not pin down or determine.

The taste starts out sweet like cocoa powder, bakers chocolate and dark chocolate with rum poured over it, and then it shifts towards spicy and earthy like it was then strained through oak chips, vanilla beans, orange slices and peat moss. Then drizzle caramel, maple syrup and bourbon on it, throw in a hand full of brown sugar, add in coriander and a dash of white pepper, squeeze a lime over it and this is what poured out of my bottle. It’s very complex, but too confusing and a tad bit too sweet for me. It hit the mark as a cola stout, but this is a variant I wouldn’t revisit for $20+ per bottle.

Poured into a16oz chalet glass bottled on 8/10/21. Pours near pitch black with a half finger head that settles really quickly, leaving little lace if any. 4

Taste follows cola stands out, with vanilla, orange peel, and bourbon hits you hard in the lingering finish. 4.25

Mouthfeel is above average, very gentle carbonation, maybe a tad dry, and at 14% it is a sipper, but goes down fairly easy considering the slight alcohol burn. 4

Overall I felt I had to try this one and not sure why, especially at $25 a bottle. Only bottle of this I will ever purchase, but still a nice beer experience. 4

Black color, tiny tan rim around the circumference of my glass.
Aroma of cola and vanilla.
Cola dominates the taste, then a little vanilla. Spicy/peppery finish.
A little thin on the mouthfeel.
Interesting beer.

Pours dark brown/black with almost no head. Aroma is flat out cola and noticeable sweet notes. Taste follows with a mix of cola and dark fruit stout notes. Feel is good, rich and smooth. Overall it's a decent variation of a great beer. Interesting and enjoyable.

Poured from the bottle into a branded Goose Island Bourbon County snifter.

The aroma is classic but seems stronger on a molasses end. Thick molasses, but excellent oak tones with real barrel hinting character. There's a touch of cola sweetness in here also which is really just like a classic soda. That's very impressive.

Real spectacular palate. The BC classic flavors and mouthfeel are all here. Chewy molasses and real rounded oak flavors. Hints of dark chocolate all over, and some black forest cake like vanilla. Cola sweetness and even hints of little cut bubbles perhaps in the mouthfeel it seems, or is that all psychological! Finishes rich and woody with cola and soda sweetness that cuts nicely almost cocktail like but doesn't water down too much. Slow warmth brings out even melted milk chocolate flavors too.

Very nice variant. The cola and vanilla sweetness brings an interesting cut with some sacrifices to the body but it's all in an excellent package regardless.

The orange citrus shows, fake vanilla, chocolate, Dr Pepper spice. Definitely has a cola flavor. But it’s thin and has too much carbonation.

I don’t understand why they make these offerings (and why I buy them), when they are watered down versions of the base beer which is better and cheaper. One of the more disappointing bcbs variants.

Dark brown with some head that dissipates quickly. The aroma is sweet vanilla with a waft of alcohol and cola. The taste is very sweet, sugary, there’s the cola, vanilla, barrel and a dash of chocolate. Tastes like a hyper sweetened version of the original with a dash of cola. These variants are always an adventure and this is no exception. I prefer the black tea from last year but glad I was able to try one of these to compare and experience and I’m good with one, cheers!