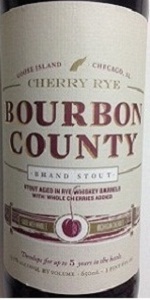 Great beer, but the cherry isn't that outspoken as I would've expected. There is a slight hint of it in the beer, but I would have liked it to be more present. Nevertheless is this still an awesome beer.

I'm finally giving a 5 rating. This 2012 offering pours a thick black color and coats the snifter with a thin slickness, underscoring a richness and depth of what it will taste like. There is a slight reddish hue. Scents of bourbon, maraschino cherries, and chocolate notes hit the nose immediately.

Beer is splendidly complex. Rich cherry notes perfectly align with the bourbon flavors that GI consistently churns out in their BCBS line. The addition of rye notes gives a bite that plays off the warming burn in the finish just right. I really cannot find anything I don't like in this beer. The bottle was split 4 ways, and I could have had more.

I think the aging and the liquid itself worked out perfect, and thus the score. This is as good as it gets for me. I enjoy complexity in my imperial stouts. I have now seen the top of the mountain and all that left is to find another peak. Cheers!

thanks Dan for opening this. growler from whole foods. Poured dark brown with a huge cherry scent. Flavor of cherry syrup, soy sauce and rye. very sticky palate. flavor bursts of cherry, even more in the growler than bottle. freakin delicious, my favorite of the variants

Bomber poured into a matching BCBS snifter. The brew appears black in color with a dark brown head that is quick to fade.

The nose is filled with cherry and chocolate. Subtle whiskey accent along with vanilla and caramel. A strong cherry character is present smelling natural and pitted, bordering on over-ripe juiciness.

The taste includes a lot of over-ripe pitted cherries. Somewhat earthen with chocolate, roast, vanilla and caramel. It gets boozy and nearly medicinal as it warms up.

This is medium to full bodied with modest carbonation. A surprising amount of tart cherry quality that is mildly medicinal at times but well blended and enjoyable. Would not mind having this again but doubt id be willing to give up what it would take.

Big thanks to Kevin for cracking this with me, now leaving only the Vanilla variant that I've yet to try. Cherry Rye is pitch black and doesn't seem to allow any light to pass through it; a deep, dark-tan head slowly forms with the pour. Fine-bubbled and well-defined, it recedes to a ring fairly quickly. No lacing is present, but the beer leaves some sticky alcohol legging along the glass when swirled around.

There isn't much of a surprise when I bring my nose to the beer and am pounded with nothing but barrel-notes; heavy oak, smooth and warm bourbon, and large traced of induced vanilla with a slight hint of coconut on the end. It's got that signature "Bourbon County" smell to it, except with the slight addition of cherry. Somewhat to my chagrin, the cherry isn't nearly as present on the aroma as I'd like. Surprising, given how potent Bramble was with the berries.

The underwhelming cherry on the nose leaves the aroma smelling not much different then a regular bottle of Bourbon County Brand Stout, which definitely isn't a bad aroma... but I came here for cherries, so why am I having such a hard time picking them up? They definitely peek out a bit more as this brew warms up, but they never really pop quite like I'd expect. Their subtle and almost nonexistent tart and sweet addition may seem masterful to some, but I want more.

One sip later, and some faith is restored in the brew, as the cherries are much, MUCH more apparent on the palate than they were in the aroma. It starts off with a light tartness, enough to jolt the taste buds but nowhere close to puckering; sweet cherries, sticky molasses, and handfuls of roasted malts are the base for this brew. The mouth feel, much like most of the Bourbon County series, is wonderfully silky, smooth, and borderline chewy.

After the initial tartness of the cherry, it fades into a soft sweetness that stretches out while the barrel-flavors make their way in. Heavy, smooth bourbon from the middle to the end with huge amounts of oak and wood. Big-time dark chocolate and fudge flavors leave this beer tasting like a dessert in and of itself. The cherry in the finish, although authentic, leaves a very slight medicinal and chalky taste/feel that gets a bit fatiguing after a while, though it's not too distracting from the rest of this brew.

Another good beer from Goose Island, although this is definitely my least favorite Bourbon County variant to date. The aroma didn't have enough cherries, and while the taste contained plenty, the flavor of them didn't mesh with 100% perfection like I was hoping for. Still very tasty, but be warned, this beer is very sweet - almost like a cherry fudge cake in liquid form. Eight ounces was enough to tackle on my own, twenty-two would be insane.

jacwomyn from District of Columbia

Thanks to jsteel2 for sending this long time want over via trade!

A: Pours an opaque black with less than 1 fingers width of mocha colored head which dissipates down quickly and leaves effectively zero lacing.

S: Luscious cherries, dark chocolate, and booze. Barrel notes arent as strong as some of the other variants, but are definitely present with oaky vanilla and whiskey booziness. I also get cinnamon and roasty aromas. Wonderful.

T: Wow, there is a surprising degree of cherry flavor right up front, which is then followed beautifully by the big chocolate, roasty, and coffee BCB stout base flavors on the finish. Pretty big bourbon characters, as is to be expected with any BCB offering, with lots of charred oaky goodness. Some boozy ethanol on the finish, especially as it warms, which works well to balance out the sweetness.

M/D: Full bodied but not necessarily thick or chewy, nice smoothness with appropriate carbonation. Drinkability is good, but is somewhat limited by the huge sweetness.

O: This beer does not suck. Awesome variant and certainly worth seeking out.

A - Tan foam settles to a collar and a few wisps atop a black body. There is a hint of brown at the edges of the glass, and a few specks of lace left behind. In short, it looks a lot like Bourbon County Stout.

S - Reminds me of cherry pie, with a mixture of cherry (duh), graham cracker crust, vanilla, and notes of coconut and chocolate as well. The fruit character is mildly tart, which is nice as it helps cut some of the more saccharine flavors of the base beer. The whiskey character is surprisingly mild in comparison to the other flavors. On the whole this is understated, even when it reaches room temperature.

T - The taste is a little more like classic BCS, but with sweet cherry flesh combining with the vanilla and chocolate to give this a more decadent dessert feel. The rye manifests a bit more here, but I'm not sure I'd identify that type of whiskey specifically as the spirit flavor is less present than the oaken barrel notes. There's a tart cherry skin flavor in the finish that isn't entirely integrated and gets a tad off-putting after a while.

M - Could probably crib this from regular BCS; medium-full body, smooth and chewy texture, lower carbonation, super sticky residuals, and a bit of alcohol warmth after a few ounces.

D - It's nice stuff, and the aroma is really enjoyable once the beer breathes for a bit. Aside from the mildly harsh note in the finish this is a pretty nifty spin on BCS. However, considering the effort involved I'd rather just go for the comparatively available Coffee BCS.

This one pours like all of the other Bourbon Counties, black and viscous with only a slight dark khaki lacing that quickly disappeared. The nose doesn't really smell too different than the original. There is a slight additional sweetness, kind of like a cherry hard candy, but I wouldn't say it's necessarily fresh cherry. Regardless, this featured fruit is more subtle than the other variants. The flavors are sweet and chocolaty. It has loads of sweet dark chocolate, sweet cherry juice (but not in an overpowering manner), roast and cream. It's sweet but not cloyingly so and isn't as sweet as Bramble. It's not the most complex beer in the world and this is probably my least favorite bariant. It drinks full bodied and has plenty of residual sugar, coating your glass. Overall this beer was just ok and a disappointment for the series. It wasn't as sweet as the Cherry variant that I had a couple years ago at Goose Island, which was an improvement, but the cherry aspect didn't really add too much to the base beer. For the money I would rather drink the regular. This wasn't worth $20+.

Cheers to Bilco for sharing this. Consumed among goblinmunkey7, Bilco, and me.

Appearance: Looks black at initial glance, but it's really more of a dark brown with some serious red and purple highlights - some clarity around the edges - pours with a small, light brown head - fades to a few small wisps, leaves a few streaks of lacing

Taste: Chocolate, cherries, and booze - dark chocolate, baker's chocolate, and some sweeter, chocolate syrup - syrupy, sweet cherries - some tart notes, but it's mostly just sweet, fleshy cherries - some burnt notes, roasty coffee - some boozy whiskey, wood not sure if I can detect any rye - some sweet alcohol

Overall: Interesting, but could be better, in my opinion

Granted, I just drank BCBS Rare about 4 hours ago, but I don't that that skews my opinion dramatically. BCBS is kind of sweet to begin with, but it gets quite lovely with a little age. The sweetness from the cherry just pushes the sweetness over the edge. I'm also not certain that I am a big fan of the rye barrels. The whiskey flavor is a bit much. This is definitely worth a try, but I might be trading out a bottle of this.