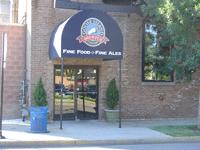 DO NOT ADD BEERS HERE

Reviewed by jjayjaye from New York

4.6/5  rDev +9.3%
vibe: 4.5 | quality: 5 | service: 4.5 | selection: 4.5 | food: 4
The primary intention of my trip was to visit Three Floyds yet I stopped in at Clybourn for lunch before I made my way south to Munster. It's really easy to find and I REALLY appreciate that it has an off street parking lot that is "ample and free". Its a pretty large place with a warm brick and wooden vibe to it that I found very relaxing. I grabbed a seat at the bar which always gives you the best advantage for scoping out the ale. There was an amazing selection of Goose Island products. I caught it on a Thursday, which is when they roll out the new brews. Today was the release of "Coffee Stout" which is Black Cat Coffee Stout on steroids! One f* AMAZING brew!! Had the Madura cask as well. The food is good; I enjoyed the walleye. The staff really seem to enjoy working there, which really adds to the experience at a brewpub and I think makes the difference (...besides the beer that is). They offer sampler flights and sell bottles to go. There's no shortage of swag. The beer was really worth the trip. Thursday is the day to hit. There were 24 different draught beers and 3 additional cask offerings to choose from!!! I'm glad that I stopped in; quite a memorable stop.
Nov 08, 2009
More User Ratings:
Rated: 4.46 by Jinx989 from Illinois

3.93/5  rDev -6.7%
vibe: 4 | quality: 4.25 | service: 3.75 | selection: 4.25 | food: 2.5
Been here a few times, pre and post renovation. I thought it was a cool place before the renovation, the new place is OK but last time I was stuck by the back bar for dinner and that is kind of a drag. I like that they frequently have some BCBS or variants for on site consumption and some brewery only stuff. Food is really hit and miss. Last time it was terrible, other times it has been good.
Apr 27, 2018
Rated: 3.95 by chrisjws from California

3.14/5  rDev -25.4%
vibe: 2.75 | quality: 3 | service: 3 | selection: 3.75 | food: 2.75
November 2017:
After a long closure and renovation, sadly Goose Clybourn is now a shell of it's former self.
The worn in wooden bar is gone, in favor of smooth concrete and pipes overhead. The bar has been totally sterilized, we were seated in the dining room, which now has another bar in it. The Siebel room is another dining room now. The atmosphere is more generic, and it was more of a tourist crowd. I gave it a chance, and can't say i'll be going back anytime soon. Remember when Moe's Tavern became Uncle Moe's Family Feedbag on the Simpsons? It's kinda like that.

Reviewed by CKlinchock from Illinois

Quality - The establishment based in an old and rustic location, but seemed very clean and well kept. Including all the bar setup, draft system seemed clean.

Service - Was great, staff was knowledgeable and willing to discuss and work with you on their selection. They are supposed to charge for their samples, yet provided a few while discussing with them. Everything seemed to kick as we were leaving (4-5 all at once), but they were attentive and knowledgeable.

Selection - Had a fair amount of beers available for selection as well as their Vintage Menu which offered many more. Girlfriend and I were both easily able to find 3-4 beers to sample a piece with no overlap and then settle on a Pint of our favorites from there.

All in all, solid location! Wish we went hungry, but maybe next time. Would recommend to other to check out if they want to get a good feel of what Goose Island has to offer without having to go to the huge main brewery location with more hustle and bustle.

The bar is a large, square, centrally-located wooden counter just past the side entrance where you can see the tanks and people taking tours. It has super old school and comfy elbow rests with some old but clean dark wood, and is surrounded by restaurant seating. The main side, accessible via a dividing space that seems to serve as the main entrance that we must have missed, is a whole other restaurant-style space.

Very quick, friendly and informative service makes you feel like you're in a small town bar rather than a huge bustling city. Tons of quality brews are on tap, with a wide variety. Don't be turned off by so many lagers, some are jarringly complex.

The food looked good but unfortunately we did not order any while we were present.

Reviewed by boilermakerbrew from Indiana

5/5  rDev +18.8%
vibe: 5 | quality: 5 | service: 5 | selection: 5 | food: 5
One of my favorite stops every time I'm in CHicago! The vibe of this bar is somewhere between Cheers, a brewery, and your favorite hole in the wall neighborhood bar. Always great music on, from classic rock to early 90's rap. The service is always great with most servers being knowledgeable about both the beer and food menus.

The food and beer selection are both excellent. The food ranges from traditional pub fare (burgers, fish and chips, pretzels) to more contemporary items (meatloaf, club sandwich, pulled pork). As for the beer list, at least 10-15 offerings on tap, maybe 20, I can't remember the exact number. They have most Goose offerings, from 312, Sofie, and Matilda, to in-house releases, both year round and smaller batches. Last time I was there, the 1814 brown ale, Impervious stout, and Campfire smoked Helles were all awesome. They also have some of the more limited Goose offerings occasionally. They also have a small, high quality tap/bottle list of both ciders and wine for those non-beer people in your party.

Overall, this is just the type of bar I love frequenting. Old school feel and vibe once you're inside, good food, awesome beer, friendly staff, and not much of the pretentiousness so many tasting rooms/brew pubs today have evolved towards.