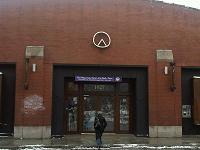 I went here on a suggestion. They have a million trophies on the wall, but I didn't really get award winning feelings with their beer. What I did get was some really good beer that paired amazingly with their pizza. If you go here expected deep dish, this ain't the place. They do thin, which is what locals eat. With pizza this good, the beer is sadly secondary.

2/19/16 - Came late one Friday, very crowded but able to get a seat at the bar. This place was highly recommended for the pizza and beers, a recommendation not only spot on, but even exceeding my high expectations. The two beers I had, The Bowie Beer and the award winning The Weight Beer, were excellent, as good as their respective namesakes. The pizza was very good, in terms of taste, texture and crust. Not sure why I never made it here before, though I definitely want to hit this again, both for the beer and pizza.

Definitely has more of the pizzeria feel than brewery. Lucky for everyone they're good at both. Pizza and beer are both great. Handful of solid beers with a strong good menu. Parking is typical north side(sucks), but worth a stop if you're on the north side.

I've been to Piece three times (I live in Wicker Park/Bucktown the two neighborhoods that North Avenue centers. In our neighborhood, my wife and I are usually the oldest people in the restaurant... even if the other residents bring their parents.)
Anyway...
The first time was for lunch. I walked in and sat behind a half-empty bar and waited for someone to wait on me. After feeling dumb and old for about ten minutes, I walked out and no one said anything.
About five years later, a friend of my wife's thought Piece was a good idea. It wasn't. Although the waiter was funny, he could not distract from the facts: the place is too damn loud to carry on a conversation, I had average sauce on the pasta and my flight of their three beers were gladly shared as they were undistinguished.
Then this past summer to escape a torrential rainfall, a friend and I scooted in. We were only going to drink beer and did in bottles (Belgians from Belgium.) He got hungry and ordered pizza. Below average.
Piece is a success.
As for me, three strikes and you are out.
This neighborhood may well be the best place to eat in a city of 2.5 Million. I have options other than Piece to explore.