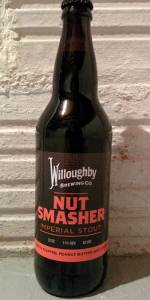 Notes: Nut Smasher is an Imperial Stout, brewed with inspiration from our award-winning Peanut Butter Cup Coffee Porter. Brewed with seven types of malts and infused with fresh-roasted coffee, chocolate and peanut butter, this brew offers an ebony pour with light brown head.
View: Beers | Place Reviews
Reviews: 76 | Ratings: 375 | Log in to view all ratings and sort
Reviews by jschott75:

Thanks to fiver29, who seems to be personally affronted by all the beers on my wants list, & goes about knocking them off frequently. 22 oz. bomber split with my wife, who is eyeing the “peanut butter” on the label skeptically. Perhaps she won’t like it. What does PB not go with?

The pour is black & dark & foamy upon a rough pour. The smell coming off of it is akin to a Reese’s Peanut Butter Cup inside out: massive peanut notes, which is what I look for & rarely find in a peanut butter beer. Can this loveliness possibly translate to the tongue?

Nut Smasher doesn’t disappoint. If you like organic peanut butter (read: real peanuts, which is what it actually tastes like, according to my disapproving children), this has echoes of that oil that forms on the top (which completely disgusts my kids). Huge peanut bite dominates. Only once it begins to warm do the other ingredients arrive via mid-palate cargo, the warm chocolate & roast that doesn’t quite lean into Starbucks. One of the two imparts a nice bitterness on the downside. Great in the mouth, & I can’t sip this. It begs to be shot out of a fire hose into my mouth hole.

You know when you first played Joust & were like “damn, I never played no video game like this before!” This is like that, y’know, without the weird flying griffins & lances & lost quarters. Glorious. And my wife just gave up, so now I’m drinking her portion. Extra life! Woohoo! This is a glorious beer that deserves a place among the elite.

Summery: Huge waves of Coffee and Peanut Butter in aroma and flavor... Def wroth seeking if you enjoy those flavor profiles. Nice body and feel to match. The best beer from my home town without a doubt~

This beer pours black and is topped with two inches of tan head that clings to the sides of the glass.

The smell is as advertised. I get chocolate, peanut butter, and coffee. The coffee smell has diminished since first having it in June at the release. The chocolate and peanut butter shine.

The coffee is more prevalent in the taste and the alcohol is not present like it was at the release. The chocolate and peanut butter are in the background more in the flavor as compared to the taste. I get some black coffee bitterness in the finish.

Thanks to Rado for sharing this one at Retsinis' tasting.

Pours an opaque black with a foamy khaki head that settles to wisps of film on top of the beer. Tiny dots of lace form around the glass on the drink down. Smell is of dark roasted malt, cocoa powder, chocolate syrup, toasted nut, and coffee bean aromas. Taste is much the same with cocoa powder, coffee bean, brewed coffee, and toasted nut flavors on the finish. There is a mild amount of roast bitterness on the palate with each sip. This beer has a lower level of carbonation with a slightly crisp and medium bodied mouthfeel. Overall, this is a very good beer with an awesome mix of cocoa, coffee, and peanut characteristics that come through slightly better in the taste.

This is a truly amazing beer! Many peanut butter beers out there, but this takes the cake!

The aroma is sweet peanut butter, coffee, chocolate and roast.

The taste is a coffee bomb with nice notes of peanut butter (not just roasted peanuts), dark/milk chocolate and lots of roast on the back end.

Alcohol is very well hidden and it's full bodied with a super creamy mouthfeel.

Awesome beer! Doesn't get much better than this.

The mouthfeel on this beer was over the top. Thick, viscous and chewy. The peanut butter flavor was on point with a mild coffee flavor supporting it in the background. Fantastic.