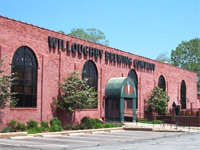 Notes: Although this brewpub has an Erie Street address, the building is located off the street and is located behind the businesses that face Erie Street adjacent to a city parking lot.
BEER STATS

Cool brewery/restuarant in old brick trolley repair station, high-ceilings with overhead crane. Huge building with large dining area at the entrance. Three-sided bar on far left seats about 20 and has a glass wall view of the brew house behind the bar. Additional seating opposite bar and on the covered and uncovered patio, which also has a bar. 9 well assorted beers on tap, I had their award winning Peanut Butter Cup Coffee Porter, and it was quite nice. I did not try the food, but there was a busy local lunch crowd.

A big, full blown restaurant that brews one really popular beer. That's the peanut butter cup coffee porter and it's pretty tasty. Everything else about this place is not great. Pretty bad service. Big, soulless building that could be so much more. I'd only visit this place if you're looking to pay tribute to one of the old guards. Cleveland the area around it just have too many good places now.

Wow this place is pretty big for a brewery not many out-of-staters have heard of. There's so much space that it really has a different vibe in each section. The impressively large bar is a mix between brewery culture and sports pub with full cocktail service, the booth-seating area is like a family restaurant, and there's a little comfy outdoor patio for those rare days weather doesn't suck in NE Ohio.

Service is great from the old pros who may be a little over-strained depending on the hour, but some of the newer staff is a little flippant or absent-minded, not getting the attention they need for proper training.

They have a medium to large list of their own beers with a very small selection of guest drafts. Their beers are of a nice quality, and they've always got their flagship PBCCP on draft for those that have yet to have it, or for those that just can't get enough.

Menu seems inspired, but food comes out cold and missing ingredients, like...poutine without cheese curds...? If you don't have cheese curds, don't serve the dish.

Huge place with a separate bar area and anot enclosed almost outside bar area. Then it has a restaurant side. Beers are good for the most part, but very over carbonated. Food was good had the smokehouse sampler the pork belly and the ribs were very good the turkey was the loser of the group. I was sitting in the bar area and the place had a garbage smell to it that was off putting. Overall nice place with pretty good beers but nothing astonishing.

“I saw a thing on a TV show about this place years ago, like when I was first getting in craft beer, and I’ve always wanted to go there”. So said Ed, back in I think ’13 when we were on the ‘burgh-Cleveland roll. Mind you, I had somewhere else to go in mind post-Great Lakes, and he didn’t put up any scrap about it so we didn’t go. Or maybe I was all about denying him his boyhood dream & breaking his spirit, by making him go a place not here, where he will refuse to drink the house beer in open Ed defiance...

Massive standalone hidden in the back of things on the main drag Erie and what is the purpose of a complimentary valet exactly? Enter in the dining side, barside, side barside, and outside something going on. It’s a massive structure, a big brick space, used to be a train repair shop in the once ago. Vaulted rafter ceilings with red I-beams & piping, and a large hook dangling over the brew room. Slat wood floorings, save the block tiling around the bar. Blinded arched windows and the big big arch to the next room.

We take up at the bar, naturally. Half a hex long cornered wood laminate topped with a lip, panel base, & piping foot rail. Seating for 18 on wood chairs. Barback is counter space with tiered booze and 8 tap stainless steel towers on the ends, plus another on the bar. Glassware & growlers below the bar shelved. Glass wall behind the bar offering brew room views, logo copper kettles & barrels there.

Large horizontal framed board over the entrance listing tap selections; beer, style, ABV, IBU, & pricing. Happy hour gets you $3 pints. Question: can you dig it? 3 flats over the bar and more on most walls, and old beer labels painted. Drop dunce hat cone lamps over the bar tracing, drop spots & mounted lamps, and chandeliers down center the length. Model train track running around the room above, most fitting for this space, and a stage in the corner for band play.
Behind me, a half dozen barrel tables, a hightop shared, and 4 tables in a raised pen. Across the room, upwards of a dozen tables & booths. On the dining side up front, a dozen booths across the floor and a dozen tables in the raised area on the end below the massive windows there. I wrote ‘5 car train advertising rail cars’ in my notes but now have no idea what I meant by that, maybe you will. Through to the side bar, a 12 seater with 8 hightops adjacent in two rows up against the garage doors opening over the parking lot. And through the indoor/outdoor to the full on aforementioned outside space behind the fireplace.

Beers weren’t outstanding but some of them were pretty good. The selection is oddball, though. 3 porters, a pumpkin, Winter Warmer, & spiced holiday ale, 2 Kolschs, an APA and fruit beer. Witz mocks the crowler process, he speaks of the crimping. Lots of Dave Matthews (tribute to Ed) and 90’s stuff otherwise. Food menu looked good but it was late and we’d been on the road a long while with Cleveland ahead of us still. It’s a cool old train space out east of Cleveland.

Great spot. Vibe was very laid back even though they were doing a big bottle release. Jim was our waiter today and he did a great job for the amount of people that were in the dining area. Food was solid, I had a burger and it tasted great. Guest taps were awesome today as well. Bottle release went very smoothly. Had a great time and wouldn't hesitate to go back again.

Nice brewery with something for everyone. Food is solid and with peanut butter cup porter on tap non stop worth the trip. Also have a crowler machine! Call ahead and give them a heads up if you want more than 2 or 3.

First time visit was for the Nutsmasher release so it was a mad house. They did the best they could to try and keep up with serving, but I would have to guess on a non event day, this place would be really chill. Great beers and great apps. I do plan on returning to get a full meal and more of that great beer!