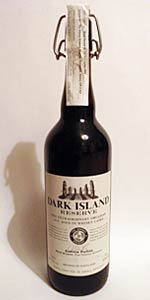 Huh - bought 2 bottles of this in Edinburgh in August 2009. Opened one upon returning home from that trip and opened the other 2 weeks ago.... Quite different experiences...

The first bottle drank like a supremely mellow Imperial or Baltic Porter (sorry, best comparative "style" that comes to mind). Mineral and light-medium bodied with a smooth, seemingly aged cocoa/coffee-roasty center. Alcohol barely poking through. Fairly well-balanced, if nothing spectacular and surely easy to put back the entire bottle of.

After countless proposed yet passed-on occasions for which to open the second bottle, I along with my good friend and brother finally opened the second bottle less than a month ago and we found a brew way further along in its development -

It poured out like brackish swamp water - the darkest brown with an almost grey tinge to the slight and scummy, plump-bubbled, and swift-diminishing foam. Not looking like a "Scottish ale" - it's a dark-fruited porter, my friend...

Purple grape skins and vaguely port wine in the nose. Oxidation, sweet corruption, for sure. Nearly off-putting unless you knew what you may be getting into. Some black licorice and char, though mellow.

Hardly a chore to sip, but I'm glad we shared this... Actually wish we would've aged this for another 3 years - mellow it all further. Much vinous, but pleasing against the fading background of roasty, chocolaty malt though, as I suggested, it probably could've benefited from an extra-extended conditioning. Caught it in transition?

Hey - I wasn't blown away initially (3 years back) by this, however, drinking it now, I've probably for the first time experienced a "cellared" (if not ideally) strong ale. Interesting. Some things to take forward...

Bottled on 15th November 2013.
Pours black with some dark brown hues, low beige head goes away fast and really sticks to the glass.
Smells awesome. Dark roasted malts with milky chocolate, huge caramel, low coffee, lots of vanilla and dark spices, mild dry dark fruit, not very big oaky barrel notes though.
Whiskey pops up in the taste more than in the smell. Roasted malts with coffee and dark chocolate, along with charcoal notes mix nicely with the strong caramel sweetness. Really balanced malt component. The dark fruit (figs, plums, dates) aren't alone, there are red grapes (bringing a mild mustiness), red berries and some faint sour cherries. Typical whiskey barrel aged vanilla spice, along with some mild cinnamon, cocoa powder and faint licorice. Earthy feel mostly, not as barelly as expected, with some oak chips, smoked wood and peat covered up by the roast. Whiskey is felt though, really clear and nice, providing a nice excuse for the warm booze. Hops aren't the star, so they're pretty low in the finish, still helping the roast bitterness a pinch.
Mouthfeel is creamy, buttery, hence a nice butterscotch feel to the whole brew. Finish is really dry and bitter from the charcoal. As it warms up, the sweet elements (the fruitiness, the caramel) start to cover up all the roughness. Aftertaste gets bittersweet, rather than ashy.
Great beer, a perfect "Orcadian Ale" enhanced by the whisky aging. The best from the brewery and personally it surpassed some russian imperials and scotch ales that i usually hold dear.

Bottled March 27, 2010. Served from swing-top bottle into a Stone nonic. Poured pitch black with a minimal light tan head. Maintained decent lacing throughout the glass. The aroma was comprised of sweet malt, caramel, alcohol, wood, and chocolate. The flavor was of sweet malt, caramel, alcohol, and slight mothballs (oxidation perhaps?). It had a medium feel on the palate with low carbonation. Overall I was not really a massive fan of this one. The slight mothball flavor coupled with the alcohol made this one tough to get through. The mothball flavor wasn't very strong at all as it was quite muted, but still present nonetheless. Upon opening this thing I was concerned I would take a sip and drain pour it, but I was actually able to finish the full bottle. Just took quite awhile...

Taste does the nose justice. Port, a trace of soy sauce and leather, finishing on plum, black currant, and a trace of spice. This is amazing.

Oily, not too too thick, but pretty thick.

This is a great beer. The price point suggests it and the beer delivers. At the price, I probably wouldn't buy it, but if you have a chance to try it (or go in halvsies), I highly recommend it.

Smell was apparent when I first popped the cap. Lovely potent whisky/chocolate aromas. Behind that and the yummy booze there's a fairly strong apple juice note. Lots of caramel and oak. Pretty awesome nose really.

Taste is again lots of smoke. There's also quite a lot of somewhat sour apple juice. Seriously, it's almost exactly like apple juice. Balanced though, and really pretty drinkable for 10%. Booze comes through, but gets more balanced and malty as I get through the bottle.

Mouthfeel is medium and a little sweet, still manageable.

When you pour it into a glass, you can see the intense body of it, but it does not give much of a head.
Smells roasty, but with this kind of old unfamiliar smell, maybe a bit oaky.
The taste is powerful, a lot of sweet maltiness, quite a bit booze, some roasty bitterness and a full delicious body to wrap it all inn. Too bad it is a limited edition.

Pours a very dark black (50 SRM) with a tan colored head. Very little lacing present. Smells of roasted malt and a strong alcohol presence is detected with a bit of a raison note and slight vanilla. Tastes warming to the lips from the high abv with a sweet, smoky flavor up front and then finishes dry with a bit of astringency from the roasted malt. This is a beer you want to drink slowly and share with others. This is definitely a beer that would benefit from aging. Drink at 55-60 degrees.