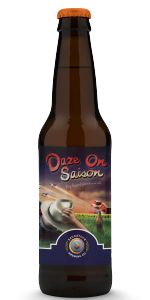 Notes: Go to a whole new dimension with this off the wall Farmhouse Ale. Dry hopped with copious amounts of Mandarina & Mosaic hops for an interesting twist.
View: More Beers | Place Reviews
Recent ratings and reviews. | Log in to view more ratings + sorting options.
Rated: 2.5 by bacher468 from Pennsylvania

From the bottle: "Illustrated by @Crocodilesoutlate".

I did some in-bottle agitating before Pop!ping the cap since it is a Saison & cloudiness is to be expected. I gave it a heavy-handed pour just to be sure, resulting in a mountainous three-plus fingers of dense, rocky, bone-white head with great retention. Color was a cloudy Yellow-Gold (SRM = 4 - 5), making the beer look like a glass of lemon meringue pie. I had to wait for a little bit for the head to eventually settle, but once it did, I was able to lean in for a sniff. Nose held the light barnyard funkiness of Saison with a slight lemony tartness. Mouthfeel was medium. The taste was very citrusy for a Saison! I got lemon and orange especially, along with the previously noted funkiness. Warming, I began to also get a peppery bite coming through. I would be remiss if I did not mention the dense, sticky lacing that formed as I drank through it. Finish was dry, but not so dry as to be off-putting. I am not a huge fan of Saisons, but this was certainly drinkable & even rather enjoyable.

Look: Its hazy straw-gold body teems with lively plumes of tiny bubbles beneath a two, and then one, finger-thick head of bright white. Solid sheets of lacing are left behind, showing thicker rings that mark each sip taken.

Taste: The flavor delivers a bit of tanginess and lots of apple, but also some orange and perhaps berry, and the previously mentioned clove and soft spice. The malt that's there is quite light, and basic, and lightly sweet. The yeasty mineral component is quite limited and only appears in the gently acidic, dry finish.

Overall: Interesting, but not compelling. Light in character overall, but enjoyable.

Rated by ewpass from Canada (PE)

The carbonation is fairly understated in its barely-there frothiness, the body a so-so medium weight, and quite pithy and clammy in its wan attempt at smoothness. It finishes well off-dry, that buttered bread thing from the aroma never far from my consciousness.

Overall, this falls right in line with the brown ale from these guys that I had a few days ago - something ain't right in Saugatuck Town, and even if it's limited to this mixed pack, that is something to be concerned about - maybe I'll get around to telling them about it, little ol' me.

3.96/5  rDev +6.7%
look: 3.75 | smell: 4 | taste: 4 | feel: 3.75 | overall: 4
Saugatuck is more accomplished in the British tradition, so it is good to see them venturing further into the Belgian tradition and succeeding.
Daze on Saison is not only a good name, but a good ale. (I'm glad I found it and drank it on the last day of summer.)
While nothing is exceptional, it is good. It looks like a saison, most of the general spices appear in the nose and the taste largely follows the nose. It seems a little thin in the mouth, but so what? This is a style made for food and it suited my leftovers amalgam just fine.
If you see it next year, buy it and drink it with anything resembling a French kitchen.

3.71/5  rDev 0%
look: 3 | smell: 3.75 | taste: 3.75 | feel: 3.75 | overall: 3.75
Pours a hazy, straw color. 1/3 inch head of a white color. Decent retention and decent lacing. Smells of slight pungent herbs, wheat, bacterial funk, slight yeast, hint of hops, and a hint of pungent citrus. Fits the style of a Saison / Farmhouse Ale. Mouth feel is sharp and clean, with an average carbonation level. Tastes of strong yeast, bacterial funk, pungent citrus, wheat, hint of hops, and a hint of pale malt. Overall, average Saison except for the pungency which I am still vacillating on whether it is a detraction.
Jul 09, 2016

O - This was a pleasant suprise. Very crisp and easy drinking will a nice balance of flavors.