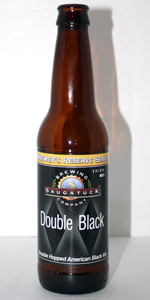 First off it's a really good pour but it's not anywhere near black but more of a chesnut brown with firm creamy one finger tan colored head that leave a full sheet of lace as it settles into a frothy mass.A mix of roast and earthy-piney hops in the nose along with mild nuttiness,some dark fruity esters are present as well.Dark roast and black licorice are large on the palate with some dryer earthy tones midway that meld into a dark chewey raisin flavor that lingers in the finish,the hops are more earthy with some light pine notes.Not bad and I like the fact it's not like a hopped up porter,I would have liked a more aggressive hop profile but it's still pretty good.

T- 1st sip is pretty balanced. Hops up front, slightly grainy malts through the middle, more hops clean up the finish, though malts try to persist. Malts get some chocolate/coffee qualities. It stays fairly balanced throughout. Flavors amplify with warmth. Hops take on tobacco-leaf and maybe a little medicinal spice (pleasantly so).

O- It's an easy drinker. While 8.2% ABV isn't huge, there's no hint of harsh fusels. With warmth it got really complex. Maybe a new style...Black Barleywine? Not the cheapest at about $2.50 a single. Maybe a nice treat.

LOOK: Pours a deep brown color, off white mocha cream head has excellent retention and lasts the duration of the drinking experience. Plenty of lace rings are left behind, which stands as a testament to the employment of many hops.

SMELL: Heaps of grapefruit, roasted notes try to hang on but are quickly overcome by a strong hoppy scent that is primary in the aroma. Earth, sweet malt hops and alcohol.

TASTE: Much more roasted flavor than is present in the nose, and that's not to say that this isn't hoppy, because there is a substantial amount of hops. Kudos goes out to the brewer for keeping all the elements in check here. Pine, resin and grapefruit compete with dark chocolate, coffee and black malts. The bottle claims double hopped, so is basically dry hopped. It is quite delicious. Alcohol very mild in the flavor. This is quite tasty.

FEEL: A big beer all around, Double Black is full bodied, smooth, rich and velvety. Carbonation is spot on at a high medium.

OVERALL: A fine black IPA , though not pale as the term IPA would suggest. Tastes hoppy enough. This reminds me of an export stout or perhaps even a Russian Imperial.

I always bet double black. I also never feel lucky. I think it's a coincidence. Anyway, this stuff pours a deep black-sienna topped by a finger of tan foam. The nose comprises roasted malts, pine resin, dark chocolate, and a lingering sense of grapefruit rind. The taste brings in more of the same, with the grapefruit morphing into a sweet version of orange zest stretching out into a strong vein of counterpoint to the dry dark chocolate and relatively mild roasted malts. The body is a light medium, with a light moderate carbonation and a pretty smooth feel. Overall, a very nice black IPA, one that balances its usually conflicting halves rather well. Good times.

I picked up a bottle of Saugatuck's Double Black from their Brewers Reserve Series for $2.29 at The Lager Mill. I'm a fan of Saugatuck Brewing Company and I'm down to try anything new that they put out, so lets see how it goes. No visible bottling date. Poured from a brown 12 bottle into an imperial pint glass.

A- The label is pretty simple and it doesn't really stick out, but it isn't bad looking. It poured a very murky dark brown color that didn't really let any light come through and it had three fingers worth of fluffy darker tan head that died down to a thick ring that stayed till the end and left lots of nice sticky lacing. This was a good looking beer, the head was really nice, but the color was a little off for the style, if it wasn't for that it would almost be perfect.

S- The aroma starts of with some sweet malts that impart some roasted, dark bread, slight brown sugar, slightly nutty, a little bit of chocolate, and a really light coffee aroma. The hops show up next and the impart some grassy and earthy aromas with a slight tobacco like aroma towards the end. The aroma was slightly above average, it wasn't bad. but it seemed a little muted and the hops weren't too complex.

T- The taste doesn't seem to be all that similar to the aroma and it starts off with a slightly higher amount of medium bitterness followed by some generic earthy and grassy hops flavors that don't have much character to them and impart much more bitterness then flavor. On the finish comes some more bitterness followed some light and watery grains and slightly roasted malt flavors that are a little bready and it had a bitter and earthy hops aftertaste. I didn't like the taste of this beer that much, the malt backbone was too weak and boring and the hops imparted bitterness but not much flavor.

M- Not that smooth, a little watery, a little sticky, on the lighter side of being medium bodied, with a good amount of medium carbonation. The mouthfeel was a little below average, it just seemed to watery for the style and it could have been a little smoother.

Overall I didn't really like this beer and I thought that it was a below average example of the style, it seemed like it was going in the right direction till I got to the taste and it got really dull and watered down with a steady bitterness throughout and no good flavors to back up all that bitterness. This beer didn't have good drinkability, it wasn't that smooth and the taste couldn't hold my attention, one is enough for me, there's no way I would want to waste my time with another one. What I liked the most about this beer was the appearance, it looked nice, the head was really good and one of the best I have seen in this style. What I liked the least about this beer was the taste, it was pretty dull and thin, with nothing really grabbing my attention. I wouldn't buy this beer again it's my least favorite Black IPA, I wouldn't recommend it. All in all I was let down with this beer, usually at worst Saugatuck's beers are pretty solid but this one turned out to be a miss, it really didn't have the nice roasty and hoppy flavors that I expect from the style. So far this is one of my least favorite beers from Saugatuck. better luck next time guys.