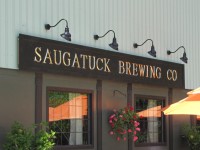 I stopped at the Kalamazoo, Mi location because Gonzos was one of my favorite local breweries. The new prices are ridiculous for a MI brewery. I was charged $8 for a 10oz pour for a NE IPA. The menu was lacking selection, and nothing was reasonably priced for a small town brewery. Their was about 3 other customers on a weekend and it had a weird vibe. They promised to keep Gonzos vanilla java porter but stopped making it. I'll never return again.

Unfortunately, probably the worst service of any Brewery or restaurant I've been to in a while. The beer is at best average. However, the outdoor serving area was beautiful on a beautiful Michigan Evening.

I've been to this brewery several times over the years since they opened at this location, but have never reviewed the place. So here it is.

The main taproom is a large open place with the bar to the rear, and tables/chairs fill the other areas. A line of brewing equipment along the far wall is used for the Brew-On-Premises feature that is offered here. (Brew and bottle your own batch of beer with the help of a skilled brewer.) A second taproom, called The Barrel Room, is located farther down the hallway, but there is no table service there, and its bar is probably opened only at busy times. It has TVs and some arcade games for entertainment.

We ordered a flight of 5 beers so that we could try enough of them to evaluate the brewery's overall beer quality. There are 16 taps plus one hand pull, and some beers on the menu were ones that we've had in bottles from distro to stores, or from prior visits, so we chose beers that were new to us. Each was brewed very well to style. We had little quibbles regarding the flavor over a couple of them (too much blueberry or too much oak character, etc, but these are personal taste preferences. Overall we gave the beers a 3.88 score. There was one cider available, plus they also serve a small selection of wines.

We ordered an appetizer to go along with the beers, so no food review is included with this write-up. The appetizer was good, and my memory from previous visits when a meal was consumed allows me to give the food a thumbs-up. There is beer to go in the form of growlers or bottles on some of the beers that reach distro.

This is a nice clean place with above average food. It is generally family friendly. The place is reall two separate facilities, which is somewhat preposterous, so choose wisely. The brewpub with a larger menu has the standard taps. The Barrel Room has the more elite beers including barrel aged beers and one-offs. If you choose to dine in the brewpub, you are out of luck in terms of getting the higher end beers. Same building, different rules.