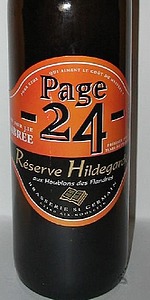 3.6/5  rDev -0.6%
look: 3.5 | smell: 3.5 | taste: 3.75 | feel: 3.5 | overall: 3.5
Dark amber color with beige head. Aroma is mostly sweet, malty and sugary with some dried fruits on top. Taste is malty but not as sweet as expected. There is some earthy bitterness as well. Yeast esters and dried fruits complete the picture. Medium body with medium to high effervescence. Not a huge fan of the style but this beer is quite well executed.
Oct 08, 2016

Reviewed by babaracas from Florida

3.62/5  rDev 0%
look: 3.75 | smell: 3.5 | taste: 3.75 | feel: 3.5 | overall: 3.5
A: The beer is clear dark amber in color (brown when viewed from afar) and has a moderate amount of visible carbonation. It poured with a quarter finger high off white head that died down, leaving a large patch of bubbles in the center of the glass and a collar around the edge.
S: Light to moderate aromas of fruity yeast—apples seem to stand out in particular—are present in the nose along with some hints of toasted malts.
T: The taste mostly follows the smell, except that the malty flavors are a bit stronger and there are also some hints of earthiness.
M: It feels light- to medium-bodied on the palate and has a moderate amount of carbonation.
O: This beer is very easy to drink and seems like it would make a good accompaniment to a meal because it doesn't have any dominant aromas or flavors that would overpower food.

This beer pours a glassy medium orange-tinted amber hue, with two beefy fingers of puffy, foamy off-white head, which leaves some prominent rising steam lace around the glass as it evenly and steadily abates.

The carbonation is rather sedate, the bubbles small and mostly unnoticeable, the body a stodgy medium weight, and generally smooth, a slight, innocuous, grainy edge burbling up from time to time. It finishes on the sweet side, the caramel and bready malts persisting, amongst some softly lilting noble hops.

An enjoyable quaff, the high-brow, low-intensity caramelized malt and old-world subdued mustiness doing well to present a united front, with further subtly provided by a seemingly osmotic channel to the je ne sais quoi hops. Good stuff, the hallow fields of Flanders evident in every sip, which turn too often into a not so gentlemanly gulp. Sante!

A- This beer pours a clear dense toffee brown color with a thick sticky beige head and a quick carbonation of tiny bubbles bursting up to the head.

T- The wet old wood and dried fruit flavors give way to a carbonic acid flavor and a touch of sweet toffee linger in the finish. There is a green wood hint in the after taste that might be hops.

M- The medium mouthfeel has a gentle fizz and no real alcohol heat.

O- This beer has some nice old ale characteristics. A good blended flavor with hints of dried fruit and wood and some good malt flavors in there aswell.

T: Amber hops, caramelized malt, and some unfermented sugar. Rather simple, poorly built, and not very balanced. I wish it were complex and bold. Not very hoppy.

Mf: Pretty coarse and dry for the style, but overall smooth and wet (just TOO coarse and dry). Doesn't complement the flavours of the body.

Dr: Relatively high ABV, not very drinkable, and low quality for the price. This is one to avoid. Serve cold.

Reviewed by dirkchivers from California

Warmed to serving temp, then into a duvel tulip.

A. Poured a nice white head, reducing into a 1mm layer which lingers for some time.. Nice lacing. Copper, amber color (obviously).
S. belgian yeast notes, banana, not much clove but a certain spice, hint of bubblegum. Toffee maltiness. Some metallic, minerally quality. Not bursting with aroma but pleasant and sweet.
T. Curious but bland. toasted bread, maybe sunflower seeds? Slight hint of the toffee from before, but its quickly gone. Malt flavor is burnt and bitter. Dry and sharp. Not much depth. I can feel the alcohol in my breath but not in the flavor. Finish is burnt bread and bitterness, like crushed dreams.
M. Medium body. carbonation feels as though it attacks the taste buds, it stings a little bit, accentuating the bitterness
O. Dislike. Too bland and sharp.

Reviewed by NittanyBeerFan from Pennsylvania

The body is a somewhat hazy copper hue topped by a creamy head that produces subtle lacing. The head is fairly well retained once it reaches about 2 mm in height.

The aroma is, as one might expect from the color, full of caramel. True to the style of biere de garde, there is a full bready component to the bouquet as well. The caramel and bready sweetness is accompanied by fruity esters, mainly pears and bananas. There is also a saison-like clean clove finish. The flavor brings on more accompaniments to the supple breadiness and caramel sweetness, as nutmeg and cinnamon provide an autumn-like spiced character in the finish.

Creamy and prickly from the nice level of carbonation, the mouthfeel is enjoyable and satisfying. I could definitely drink a few of these. The finish is dry, as might be expected with a high-attenuation saison-like style.

Reviewed by DirtybeerguyRI from Rhode Island

SMELL: Lightly smells of fruit (apples perhaps). Others have mentioned bananas, but I didn't get that. If I take a really deep whiff, I pick up a hint of pepper.

TASTE: A very pleasant, refreshing brew with an accessible taste for a broad range of palates. It's not very adventurous, but not every beer needs to be the beverage equivalent of archeology with Indiana Jones. You'll pick up some spice and light fruit tones. Bitterness is low-medium. The finish is hoppy but not in-your-face.

MOUTHFEEL: A little fizzy on the tongue, but very clean overall. The flavor doesn't linger for very long.

DRINKABILITY: You could serve me many of these and I'd be quite content (and eventually blitzed, but before that ... content). It's one of those beers where you have a sip and think "That's really quite nice."

VERDICT: I've walked by this beer on the shelf several times. It hasn't been on my radar so I never thought to pick it up. I'm glad I decided to grab one of these on a lark. This is a great beer to give to someone who is wary/ignorant of artisan beers. And if you're already an artisan beer lover, then this a very nice session brew.

The beer pours a light copper amber color with fairly good head retention and minimal lacing. Don't get a whole lot on the nose, just some light honey, sweet malt and orange citrus. Flavors replicate the nose in this spice filled, somewhat sweet beer. This almost reminds me of an English ESB meets Belgian pale ale, as the malt profile puts me very much in mind of Fullers ESB. There's also some bitterness in the finish, that helps to further counter the light sweetness. Mouthfeel is medium bodied, with a decently long, slightly bitter finish. Drinkabilty is OK, with the alcohol almost completely unnoticeasble.

Not a bad beer, by any means, but it justs seems like there are so many other interesting things out there from the genre. Pretty unexciting beer here...

Reviewed by drpimento from Wisconsin

3.24/5  rDev -10.5%
look: 3 | smell: 4 | taste: 3 | feel: 3 | overall: 3
Not bad, not great. Nice label. Swing top opened with a good "pop". Poured with a smallish cream colored head that quickly faded to almost none and no lace. Color is a slightly hazy amber with some sediment bits. Aroma is nice with malt caramel a little fruit and hops. Flavor is not as full of character: malt a bit roasty a bit of acid a bit of fruit. Body is ok with lots of carbonation which, I'm not sure if it helps or not. Finish is like flavor and fairly short.
Jun 28, 2010

Reviewed by jgasparine from Maryland

T- A *SLIGHTLY* milder flavor than anticipated. The malts are more bready than I thought they would be... and these bready malts seem to combine with some faint non-descript spiciness. The weak flavor of stale hops and general mustiness persist throughout the drink. This brew is substantially unbalanced to the malty side right up to the tail-end of the finish, which showcases a mild hop bitterness. Overall, I am impressed.

M- Nicely underattenuated. A nice medium body which features an abundance of soft carbonation. Very impressive mouthfeel for a Biere de Garde. Wish they were all like this.

D- Wonderful to look at, smells and tastes great too, and no single characteristic eclipses another... this stuff is super-drinkable. Just wish it didn't cost so much!

Reviewed by malmquna from France

Of course, darker than the blonde version, the head poured foamy and lasted some time. Hop aromas were abundant, now with some roasted malt in the nose as well.

Slightly less sweet than the blonde, the malt remains well-balanced. It appears rather than increasing the amount of malt to produce a darker color, less, but slightly darker malt was used to produce the amber color. As a consequence, this amber beer is slightly more roasted than usual, but still remains light. The hops remain present in the mouth and marry well with the malt.

This is another well-built beer from Page 24 and begs a try, along with any of the rest of their offerings you can get your hands on.

Reviewed by philipquarles from Connecticut

3.53/5  rDev -2.5%
look: 4 | smell: 3.5 | taste: 3.5 | feel: 3.5 | overall: 3.5
Fresh 75cl swing-top. Pours a cloudy, ruddy amber with a fluffy off-white head that lasts. Interesting estery nose, with lots of peach-like notes. This pretty much masks anything else that may be going on. The same sort of thing happens with the taste--all fruity esters, with only a bit of faint amber malt. Light hops at the finish, though it's generally sweet. Not really sure what to think about this one.
Oct 23, 2009