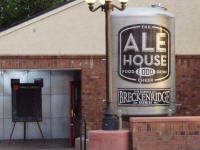 View: Place Reviews
Reviews: 6 | Ratings: 11 | Log in to view all ratings and sort

I hit this place up 3 times in 2 visits to G.J. Service ranged from great to barely o.k. (take order, drop check & run) with minimal to no conversation about beer. Service score was weighted for how busy the place was. I sat a the bar twice and outside once. Great space, airy, outside is beautiful (dependent on weather, obviously). Selection is solid, a bunch of local & specialty taps, around 30 total. Food is definitely above average for a brewpub & the happy hour is a great deal. Would suggest avoiding entree type dishes & stick to apps. Overall, I would say the place is a don't miss.

This is the Grand Junction extension of the Breckenridge restaurants...which have all been pretty good across the board. I guess this place has been around for a while, but once Breckenridge came in it really took off.
Looks like a pretty standard casual restaurant/bar. There's a large bar with nearly 40 taps in the middle surrounded by a large casual seating area with lots of TV's in easy view. There are also plenty of non-bar booth seating areas, a few pool tables, and a great outside patio area with lots of tables, misters, a stage, and tons of room.
Food is pretty much what you'd expect. Burgers, sandwiches, appetizers, and a section of entrees like steaks and grilled items that are a slight step up...but a tiny bit pricey. The normal options are all priced as you'd expect elsewhere.
If you came looking for beers, you're in the right place. They have the entire normal Breckenridge line-up including several 471 items and some house only beers like the brown and (especially tasty) stout. They also have taps from Bristol (including Black Fox), Durango, Left Hand, Oskar Blues, Boulder, Deschutes, Odell, and others. There are a few macro and common import taps, but they majority consists of Colorado and western craft taps. I had a beer that tasted a bit old (it had been fine the previous week), and swapping it was done with no issues at all. That's always a good sign, as they were more than happy to do so. With 40 taps, that happens at even the best of places.
Tons of taps, solid food (the appetizers are great), good service, and a really cool atmosphere make this place and Kannah Creek a great 1-2 combo if you're in and around Mesa.

Headed by the Ale House during a geology field trip to Grand Junction and the surrounding areas.

Gorgeous outdoor patio with a large lawn accompanying it. Inside is a large square bar with several high-ceilinged TV's and plenty of tap space. Surrounding it is a raised platform with pool tables and dining space. Sort of a "frat-boy" quality to the bar, but that's okay...Food was standard pub grub, but tried to be a bit dressier than it tasted. A bit on the expensive side, too. Waitresses were moderately attentive, but somewhat off-put when our group asked to split the check.

The beer is the highlight here, as it's easily the best selection in Grand Junction. Roughly 8-10 Breckenridge BBQ offerings (I had the Pandora's Bock), and several other seasonals rotating through. The highlight was a tap of fresh Deschutes Hop Henge IPA...man, I love that stuff! Several Boulder Beer choices as well. Tap lines were clean, as were the glasses.

This is my favorite brew pub in Grand Junction. It demanded a return trip when I was out there last week. The atmosphere is clean, open, and airy. There is a big spacious bar in the center with a good ten seats on each side. TVs set to sports abound. The bar has 32 drafts on tap at all times about ten of which are Breckinridge. They also had O'Dells and Deschutes among others. The service was friendly and timely-especially considering how packed the bar was. The food was excellent. My favorite is their spiced bison burger and sweet potato chips. All in all a very enjoyable experience.

Atmosphere is very good. Inside is quite spacious with the bar being the center piece surrounded by comfortable booths. Outside the patio was very large with plenty of tables. There were even comfy lawn chairs on the grassy area under trees focused on a musician was setting up to play for the early evening
Quality is very good for the facility as well as the food and beverages.
Service was hit and miss. The first visit we sat inside and the service was excellent. The second visit we sat on the patio during a somewhat slow happy hour and the service was average.
Selection of beer was very good with 32 brews to choose from including 8-10 Breck brews as well as quality guest taps including several from Colorado.
Food was very good both visits and reasonably priced. Recommend the AleHouse Salad paired with a burger or one of the house entrees.
Overall value was reasonable. Happy hour prices were approximately 3.00 for a pint. Definitely check this place out if you are in the Grand Junction area.

This place makes me want to move to Grand Junction! Without a doubt the best brewpub in the city. It's clean and classy with live music in the evenings on the patio (gotta love the mist maker on a hot day!) My bartender was friendly, professional, and eager to pour me samples. There is a big, stainless steel horseshoe shaped bar and 32 beers on tap, including 9 of Breckenridge's own brews and several other good micros (Odell's 90 shilling, Palisade's Farmer's Friend, and more, I don't remember now!). There's a decent selection of bourbons and single-malt scotches too, but I left those alone. I happened to show up during happy hour, so after two pints and three samples I left very happy with a bill that came to something like $4. The beers were very good (except for that redhook red I sampled--funky). But the pints I drank of the Avalanche Amber and the Ball Park Brown were both excellent brews. If you stop at only one brewery in Grand Junction, make it this one!