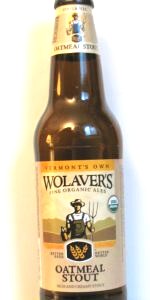 Easily my fave of the Wolaver's beers.

Pours a roughly equal mixture of brown and black color. Beige head about 1" deep, hearty retention and lacing to it. Aroma was of roasted malt and almost nothing else save a hit of hops out the bowl.

Taste was similar to the nose, roasted malt first, primarily, foremost. After that, you can get that bitter hit of hops, but you're getting mostly a dry coffee aspect from the malt roasting. Could be smoother, could be thicker, but I don't really view the thickness as a problem, there are too few mild/session/regular strength stouts out there. On the smooth end, would seem like the use of oats and the minimal strength would produce more smoothness, but this didn't really fit in with the oatmeal notion of a smoother less robust stout that might be a lil chewy.

While it was better than every other Wolaver's offering I've ever had, I wouldn't say its quite deserving of its lofty score here.

M- creamy but lacks the maltiness i prefer in a stout.

O- a good beer but not a favorite. easy to drink though

**
10/30/2012
AROMA: Oats, Beer.
LOOK: Dark black Color, little head.
TASTE: Initial Sour taste, softened through the glass (poured from a bottle). Late coffee and oatmeal flavor.Light carbonation.
FEEL: Thinnish for a stout.Took a while to get into this, but I liked it in the end.
Was initially thinking this beer would score under a 2.0, but it rallied to be about average.
**

Pours a dark brown with a foamy tan head and a creamy tan lace that retains well. A good looking brew.
Moderate aromas of coffee, milk chocolate, and oats.
Smooth on the tongue. Milky sweet and coffee bitterness create a good balance. Some burnt roasted malts and some bitterness in the finish. Overall I like it, my only complaint being that the body is a bit thin and the carbonation a touch flat.

Medium-dark brown with ruby highlights. Minimal head so can't comment on the color though it appears a bit tan. No lacing to speak of.

Smells somewhat sweet although nothing predominates to my sense. No hop to speak of.

Delicious coffee/toffee/crystal blend, smooth and easy tasting. Sweet aftertaste lingers on the tongue. Very pleasant.
Mouthfeel is a bit thin for an oatmeal stout, but it certainly activates the right taste buds.

A solid session stout. Would like to try this on draught. Nitro would probably jazz up the aroma and mouthfeel but for a bottled beer this is very tasty all things considered.

I had as a draft, poured very dark , Also black , strong coffee smell 1 in head. The most creamy Stout ever had. The taste was great , I highly recommend

The beer comes in a deep brown color.

The aroma hits of roasted malts, chocolate, a touch of sweetness, licorice, coffee.

The flavor follows with that subtle milk chocolate, a hint of sweetness in the middle, coffee bitterness, and a soft finish of some residual sweetness and bittering hops. Mouthfeel is medium minus with the smoothness of the "oatmeal" part of the stout not very obvious.

Palate comes out a little differently. Mild bitter sensing milk like chocoalte in the mid palate but finishes more dark and burnt and powdery for the aftertaste. Warm a big but also a twinge of acrid and sour grain as well. Milky and slightly wet but a decent enough body that handles some good cream like flavors as well. Mild berry twinges of raspberry and fruit like esters that compliment nicely with the chocolate qualities as well. The sourness does dissapate after the first sip at least, even giving into more roast and char complexity as well.

Not bad, just doesn't taste as good as it smells unfortunately.

Overall: This beer is a smooth as silk stout brimming with darkly roasted malts and rich notes of chocolate and coffee. The dark color gives way to a surprisingly smooth full-bodied beer. Very Good.

A: Pours a near pitch black color with a fingers worth of head that quickly fades down to pretty much nothing

S: Roasted malts, coffee, dark chocolate, and anise come out the most. Some dark fruits in the back

T: Follows the nose. Roast, anise, coffee, and dark chocolate all come out nicely. Roast and coffee mitigate any chocolate sweetness. Dark fruits way in the back come out mostly with the anise, which is decently strong. Finishes with very light sweetness and more roast

O: A nice oatmeal stout with some good depth of flavors. Definitely has quite a bit of anise going on, so if you're not a fan of licorice this one might not work for you. Very nice otherwise

Quintessential oatmeal stout by my standards. It is soft on the mouth and the flavour is noticeable and, to a degree, peaceful. The brown colour is nice and the smell compliments the flavour very nicely. I highly suggest it.

Good beer, but not my liking either.
I was hoping for something creamier and heavier, more body. And there was no head on the pour. After taste was a little unappealing.

I appreciate a Guinness or the Left Hand Milk Stout a lot more.

Black and slick looking, feignt roasty smell. Decent beer but can't get over the bitter aftertaste. May need to give this another try from another batch.

this is a great, smooth, roasty stout. everything one should be. mine were not bitter at all like some have commented. only thing I might like is a tad more body, but it has enough as is. I just like to chew my stouts and this one is rather drinkable. very good none the less. Will definitely be buying this again. I don't always agree with 'the bros' rating, but fully agree with their 96 this time.

Finally, I found an oatmeal stout that is equal to (POSSIBLY better than, haven't decided yet) Drake's Crude oatmeal stout. This is sooooo tasty and sooo delicious. it tastes like a sweet creamy buttery sweet treat rather than beer. you know the butter beer in harry potter that instantly warmed them up etc? yea thats this stuff right here. the only reason drake's crude i think beats it is because wolavers is 5.9% and DC is 6.9%. Still top notch though.


A: the head looks creamy no light is getting through this sucker


T: its sweet but the flavors seem muted probably shouldn't have drank this after an RIS . I get a little roast taste seems a little burnt


O: it's an ok beer the tastes are very muted I wouldn't go out of my way to find this and I'd only pull one on tap if there are no other stouts

Appearance: Pours a pitch black color. The head is a finger high, and lighter tan in shade. Texture-wise, it's a little foamier than I truly like, and its retention isn't amazing, either. Having said that, the collar that stays behind looks good, though there isn't much lacing left behind. (4)

Smell: Very grainy - oats play a big role in the aroma of this brew. The chocolate and roasted notes I like in the style are still prevalent, but secondary to the oat character. Pleasant touches of umami also appear. I'm digging this beer's aroma nicely. (3.75)

Taste: This is far more roasted than I anticipated. Oats appear initially, before being subsumed by a massive wave of charred roast. Smoky notes are slightly prevalent, too. It's not quite complex, but it's a damn nice roast bomb. (3.5)

Mouthfeel: Rather tingly and even biting on occasion - that's how dry this one is. And yet, a touch of lingering sweetness remains on the palate. If I had to complain (and dagnabbit, you know I do), the mouthfeel pre-swallow isn't quite creamy enough to compensate for the post-swallow stodginess. Still, it goes down easily, thanks to decent carbonation. (3.5)

Overall: This is a really nice oatmeal stout, mainly because of how roasty it is. I'll be sure to look for this one in the future. (3.75)

3.63/5: Ever been dropkicked by roasted malts before?

Dark, Dark !. Poured nicely with a slightly off white head which left slowly. Molasses and malt are predominate with a touch of bitterness (hops?). Overall, a good balanced beer and done well. One of the better oatmeal stouts.........

Pours a dark, dark brown, nearly black. Half finger of khaki head that falls to a thin layer about halfway through. Nice, but not as thick, dark, or bad-ass looking as some stouts.

Smell is pleasant but not very strong. Mocha, cherries, brandy.

Great on the palate. Smooth and silky, carbonation is present, but there is no real prickling effect.

This is a solid stout, especially considering a six pack is priced a few dollars less than some of the more well-known examples of the style. Made in New England, organic, and not too pricey. Recommend

Look: As dark as anything I've had before. Like used motor oil. About 1 finger of head poured into a snifter, which dissipates into a ring around the glass rather quickly.

Taste: The taste matches the smell. No hops present. A nice hint of sweetness and coffee.

Overall: Love Wolaver's Coffee Porter. I've only had a sip of their oatmeal stout until now. This may now become on of my go-to choices. Very good brew.

m: smooth with a little tanginess on the tongue - with a slight dry feeling on the finish.

o: This used to be a favorite - but now that I sit and try to rate it critically I am not sure why. It is a good brew - but it is not outstanding. I certainly won't turn one down - but I am going in search of a replacement in this category.

Edit : I had this again tonight and man is it awesome. I may have had a bad bottle when I did my previous review. I am amending the taste description and score.

t: nice malted taste with bitter coffee throughout. This is a great stout taste even cold (the flavors are present without warming up). The coffee flavor is very nice and goes down easily.
Old taste score = 3.75
new taste score = 4.25

M- True to the style. Smooth full-bodied. Creamy near the middle and finishes dry.

O- A solid Oatmeal Stout. A fantastic, complex yet well-balance brew. All the taste profiles help highlight the style. First time having a Wolaver brew, and look to enjoy some more of their offerings.

Not sure how they rate this a 96, don't get me wrong it's a good beer, but not really above average for an oatmeal stout. Nice flavor, very drinkable, nothing super interesting though. I got a Wolavers Mix box for Xmas and everything in it was good, but just good. I've been to their brewery several time and they always have something better on tap there than you can find in a bottle.

on draft in a shaker pint

Wolaver's Oatmeal Stout from Otter Creek Brewing
Beer rating: 89 out of 100 with 1007 ratings