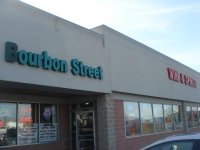 On my way back to Vermont from PA (visiting my parents), I used ratebeer to see what beer places were enroute along RT 78. Lo and behold, this place came up, just across the border from PA. Fairly easy to find right off the interstate, it looked great from the outside, but wasn’t exactly the cleanest on the inside. Normally, that doesn’t bother me and still didn’t as I asked the one guy that was there where the beer was and he pointed to the section. Selection was everything I expected for New Jersey distribution and quite good, as every time I’m in NJ looking at beer, there’s always something new to try even if it isn’t a New Jersey brewer. Value, yeah, about that, well, it’s New Jersey and honestly, I thought it seemed better than other parts of the state I’ve been in. I’ll go back here when I get the chance.

Stopped in here because a friend said they had a pretty good beer selection there, upon my arrival I was moderately impressed with some of the beers they did have on the shelves. The store is pretty much cut and dry a liquor store but there is a decent amount of beer on the far end. I stop in here when I'm just curious to see what's out on the shelves.

The store is mostly wine and spirits with the very back aisle being the beer selection (which is decent sized), they also have cold beer to go. If you're in the Philipsburg area I'd recommend stopping there.

The place is a great beer store that gets some of the top tier beers in America. The only problem I have with this place is they price gauge. They literally have beers such as FSW 18 for $25.00 bucks!are you kidding me? if they fix this problem, this place would be one of the best in the state. As for now, it's good if you don't mind giving up your first born to get something.

As I walked in the door, I was almost immediately greeted by a tout girl offering wine samples. While friendly enough, she was extremely clueless about the products she was giving. I moved over to the beer area. They have one half an aisle dedicated to craft singles. It is a decent selection I saw a Fantome, a lot of Stone, Allagash, DFH, and many others. There is also a cooler section with BMC and chilled micros. on a side note, a young guy came up to me and asked ic I needed help. Since he offered, I asked 'Do you have any Firestone Walker?' His reply was ' Who makes that?' UGH! All in all a really good place, just short of great.

I must say that I was pleasantly surprised with this place. After visiting Oak Tree Liquors earlier in the day, I didn't think this store could match up. I was wrong. The selection included many craft beers, a decent selection of imports, and loads of choices available as singles. The staff is friendly and the prices are fair. The store is easy to navigate and fun to shop in. Most of your north east craft beers are hear, and I picked up a brew from Indonesia that I have not seen anywhere else. Overall I must say that this is a quality store that will fill all your beer needs.

This is my go to store for the phillipsburg/lehigh valley area along with abes and stockerton. Very good service as I've never been in there without people asking me if I have any questions and when I do they are very helpful. They now have founders and carry a good selection of the classic american micros. They even had SN celebration ale still in stock as of 1/23 (plus I got a free pint glass) and had a ton of nugget nectar at a decent price. They are pretty decent in terms of price and offer occasional sales. This is def a go to shop for buying sixers/twelves and occasional stone/rogue/founders/etc products.

Bourbon Street Liquors is a great place, great service, and great selection. The store has a few qualities that set it above the rest: a micro-brewery single bottle selection that is like a penny candy store and its appearance. The Inside is marvelous, very well kept and very well decorated. Bourbon Street is a place you can bring your children into and not have to be worried about too, which is a very underestimated quality. Also they are very convenient, it seems as if they are popping up everywhere. Keep up the great work!

Down past the wine (looks like a good selection of wine) at the end of the store is where the beer is located. The good beers take up 2 doors in the aisle of coolers. And opposite are 6 packs, 4 packs and single bottles. A very nice selection of Victory, Smuttynose, Geary's, Stone, Stoudts and I was thrilled to find Gritty McDuff, both pale ale and bitter. First time I've been able to find that in NJ or PA. The single bottle section has a large selection. I think this place has the best selection in the area. Seeing my selections at the register the manager (?) told me I should try a Wells Banana Bread beer. On my next visit I did try it. Awful! I won't be taking advice from him again. Cute girls usually running the registers, which is always a nice thing.

Quality: In the land (anywhere outside of PA) where competition helps the consumer, there are plenty of liquor/wine/beer stores. Bourbon Street Liquors actually has two locations. I was at the one by ShopRite in Philipsburg. Upon entering you walk into lots of wine selection and then liquor. Finally the last aisles reveal the beer selection, one side is warm singles/sixers and the other is coolers. The prices are clearly marked and they give you a case price if you want to get a bunch of it.

Service: Non-existent, although I never really bother to ask people questions because I am usually more knowledgable when it comes to beer. The girl at the counter had trouble with my AMEX gift card.

Selection: Pretty much average. Lots of Unibroue (not really available to me), weyerbacher, Orval, La Chouffe, Ommegang, Samuel Smith, victory and other micros. Looks like they got raided out before the holidays (I went on Dec, 24th, 2006) so they probably had more selection before I got there.

Value: Great, considering what I pay for a single in PA. I bought 1 Three Philosophers $5.99, Unibroue Tres Pistoles 7.99 and 2005 8.99. All were prolly 3-5 less per bottle compared to what I'm used to seeing. It makes buying singles worth it. I'm never gonna buy another single in PA again I think. Im going to wait until I travel to other states to try new stuff.

After reading so much on here about how terrible the PA case law is (as if its some new recent development) I decided to cross the border and check out the fabled liquor stores in the distant land of NJ. what a waste of time and gas.
i am really confused - everyone is upset because you can't buy a 12-pack in PA? a 12-pack of what? the only 12-packs i saw here were BMC. I had these visions of 12-packs of avery, southampton, all sorts of fantasies. My local 6-pack shop (in PA!) has a selection that is literally 3-times this big (literally, i counted.) I understand this might not be the best example of what people are talking about, but this place was listed as the last place to grab a 6 or a single before you get to PA - my advice is don't bother, check out beerfly for bethlehem and allentown for places with a real selection. i read here that they had Ommegang, which is what i set out for - guess what they were completely out of? Ommegang. Guess what response i got when i asked the clerk about it? total blank stare, they had never heard of it. i showed them the empty spot in the cooler and they said "oh, that one is always empty."
!!?!?!
Needless to say i hightailed it back to tyrannical PA and bought my Ommegang plus avery maharaja (plus a weyerbacher insanity to help me forget this whole ordeal.) I even did this in PA on a sunday!

This place has a pretty good selection for the area. There are mostly six packs and four packs available in different varietyies. Down past the packs are some single bottles. There are pint bottles and regular twelve ouncers. The variety isn't bad but within a few weeks you might get bored because you will have tried all of the different types. But I recomend this place to get a few different kinds of beer. the prices are a little expensive. For the single bottles you are looking between 3 to 4 bucks a bottle. For the six packs its about eight or nine which is a little on the pricey side to me.

This is the last place to stop in New Jersey as you travel west towards Allentown Pa on route 78, to buy a sixer or two or singles before you enter "cases only" Pa. This fairly large wine/booze/beer place is located just a few hundred yards off of the interstate. The selection was a pleasant suprise as they stock many of the typical belgians, german and british imports, what really stood out was the coverage they provide of many of the local/regional micros, Weyerbacher, Troegs, lancaster,Heavyweight, Ommegang etc etc, still no stone in NJ, what a drag...service was non existant, but I usually have no trouble finding what I'm looking for. Well worth a stop.