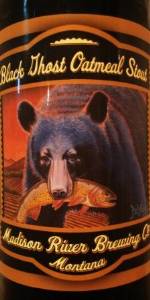 Notes: Madison River brewed this beer with the purpose of giving people a quality Stout in the Winter season. It has had such a positive response MRBC has decided to brew this beer and keep it a permanent fixture in our lineup all year. This stout provides a bigger body, but due to its oatmeal influence is not overpowering. In turn, this stout is balanced and smooth, giving you the opportunity to taste authentic ingredients without being too heavy in the finish.

A- Pours a deep dark cola inspired brown color and with decent opaqueness. The head appears to be creamy and dense, is tan in color, but doesn't exactly exude a great retention level, only leaving behind a wispy looking film over top the liquid. There seems to be a good deal of fine bubbles, and the lacing is modest at best. Overall nothing to write home about.

S- The aromas on this one are interestingly nice....I am detecting a distinct sweetness that I'm not overly familiar with....perhaps some raisin sweetness or overtures of cooked brown sugar? Muted licorice root like quality, black and chocolate malt bitterness, oat dryness, along with more typical dark chocolate/cocoa and black coffee notes.

T- Oh this is quite nice! Heavily roasted malts provide a smooth bitterness, that is full of nurturing dry grains and oat flakes which rounds out a slight tang on the middle....cant quite put my finger on what that tastes like or what its from though. Deep dark toffee or blackstrap molasses provides a hint of sweetness, with other flavors like 90% or better chocolate bar, coffee with cream, and a touch of vanilla. The finish draws out somewhat, and the roasted malt qualities start to really shine......classic and super tasty Stout!

M/O- Creamy mouthfeel, smooth tight carbonation and a refined dryness all contribute to this being a very well rounded oatmeal Stout! Dont let the alcohol content fool you....this is as easy drinking a stout as you'll find....7.5% is really hard to believe! Overall this is a mean brew and comes highly recommended from myself! Give this a try if given the opportunity!

Without a doubt this is my favorite beer. It was a good call for Madison River to decide to brew this year round. At the end of the day if you like Guinness you'll love Black Ghost Oatmeal Stout with a more defined taste and a subtle oatmeal influence. Slightly carbonated, mild finish with hints of perhaps vanilla and caramel.

Pours mahogany with one finger of tan head. No head retention or lacing

Poured out an opaque, black color with a foamy light brown head. It smelled of chocolate and roasted malt. There was a good strong chocolate flavor with a touch of coffee notes.

Poured into a pint glass around 47 degrees. The beer presents opaque with a one finger creamy tan head with good retention. The color of the beer is dark brown with rusty red hues.

The beer has a rich dark roasted malt, dark chocolate, coffee, oatmeal, creaminess, floral hops, earthy, and low fruity ester, with some yeasty and biscuit notes. There is a slight char note on the tail end of the beer.

The beer is good representation of Oatmeal stout, a subtle creamy notes with a good body in the beer. The only thing I do not care for is the slight burnt char note that I get on the back end.

Smell - Roasted malt and a touch of smoke. Fair chocolate and a hint of oat.

Overall - A fine oatmeal stout. Smooth, nice flavor and fantastic smoothness. Doesn't quite hit the depths of, say, the Rogue Shakespeare, but it's hard to pinpoint any flaws here.

Smell: sweet malt with a light, smooth roastiness and plenty of chocolate character. I really like it.

Taste: caramelly, malty and lightly roasty, there's a little less chocolate in the flavor than in the aroma. The roastiness comes out more as the beer warms on the palate. I quite like the overall effect.

Overall: a good oatmeal stout. Hearty and flavorful; it would indeed be great in the winter (or perhaps as a camping breakfast beer).

the flavor here is mostly a semi dry type stout with hints of black and roasted malts with a faint hop bitterness at the end.

the finish is great on this one, the nitro makes for such a sily smooth beer that is again helped by the oatmeal in it to bring a really great feeling beer that goes down with a nice thick coating action on the tongue and leaves a subtle roastedmalt in the mouth, great for a cold night

Pours a deep dark brown with a big, fluffy tan head and good retention. Looks the part. Aroma is pretty typical for the style – malty and musty with some chocolate malt showing through. The flavor is defined by the bold roastyness with a nice balance between bitterness and sweetness. Some chocolate character and a hint of licorice show before the malt drops off into a clean, slightly dry finish. Mouthfeel is smooth with moderate carbonation.

Overall, I enjoyed this, especially for the reasonable price. It was a little shallow on flavor/body for a 7.5% stout, and the finish is a bit clean for my preferences. But definitely a beer I wouldn’t mind having again. Seems like it would be a great candidate for nitro

Appearance – The beer pours a deep brown, nearly black color with a cream colored head of about one finger in height. The head fades very rapidly, leaving a ton of foamy lace on the sides of the glass.

Smell – The aroma of the brew is rather strong of a roasty and toasty smell mixed with a rather strong aroma of an oatmeal smell as well as a little bit of caramel. With these aromas comes lighter grainy and vanilla aromas, creating a dark and malty smell overall.

Taste – The taste begins with a rather dark and roasty taste with a good grainy base. The sweetness of the brew is light upfront, with just a hint of a caramel and vanilla sweetness. The sweetness remains light throughout the taste, with the roasty taste being joined by a somewhat rough steel cut oatmeal flavor. As the taste moves onto the end, a bitter coffee flavor joins the taste profile, leaving one with a rather dark and roasty, and slightly bitter taste to linger on the tongue.

Mouthfeel – The body of the brew slightly thinner side for a stout of 7.5 % abv with a carbonation level that is rather light to average. The lighter carbonation is nice for the darker and roasty flavors of the brew, although a little bit of a thicker body would have accentuated these and the oat flavors even better. Overall it was an OK feel.

Overall – This is a rather nice oatmeal stout overall. Dry and roasty with an easy drinking feel. While not a flavor powerhouse, it is a good, less warming, dark brew to have.

on nitro from their taproom, a cool old worldy feeling stout here, with a creamy tan nitro head on it and a matte black color, not particularly viscous as i would have expected for the style, but not thin either, a little amber glow in the center when i look at it hard enough. aroma is a little bit astringent and so is the flavor, slightly sharp just past the midway point, an odd almost tannic thing from the grain, which reminds me of some old english type ales, maybe its something from the yeast, i dont dislike it here. notes of raisin, light smoke, dry cocoa malt, light char and even a burnt coffee thing, but this isnt real bitter to me, its mellow and smooth even with the funny sharp flash in there, and the creaminess from the nitro is there. a pretty earthy grainy finish and a little bit of an english yeast thing, really pretty classic overall. a little lighter in body too which lets it be a pretty nice session brew, sneaky alcohol strength runs counter to that, but it didnt slow me down much. these guys are doing some solid beers out of this place, well respected around the state for good reason.

Poured from a bomber into a conic pint glass in high elevation Kalispell, Mont. Reviewed live.

A- One and a half finger mocha-colored head. Erodes in about one minute. Some wet lacing. Black body.

T- Quite watery, chocolate though.

O- There just isn't much to say about this beer. Love the style, dislike this example.

Pour nice and dark but not a complete blackout,

Smell nice roast upfront and hints of chocolate and coffee.

Taste good rich flavor nice chocolate and coffee coming from the aroma. The hints of oatmeal that come through are great and make it last on your pallet.