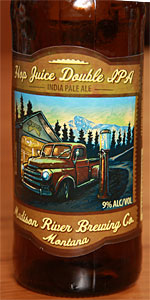 Notes: This Double India Pale Ale, or IPA, is extremely hopped American-style Ale that gets its hop bitterness and character from Amarillo and Simcoe hops. A generous amount of hops and malt, 3.5 lbs per barrel and 2800 lbs of malt, were used to give this beer a rich malt character with a distinctive hop flavor and aroma. This unfiltered beer is amber colored, thick bodied, highly bitter, and finishes off with a sweet grapefruit after taste.

This is a traditional IIPA, quite sweet and boozy. I was hoping for it to be more balanced

Pours an amber body with an off white head. Lots of tiny visible carbonation. Good retention. Lots of layers of lacing.

Scent is somewhat malt forward, I smelled pine immediately after the pour but that faded quickly and a malt scent quickly took. Fairly prominent scent overall.

Hops are more noticeable at the taste. Red grapefruit and some booze. A solid malt backbone with a nice bitter finish.

Medium to full feel(must be all the malt)

A solid beer and worth revisiting ! The name of this beer is a little confusing though, By today's standards juicy usually implies a juicy tropical fruit IPA. While I like this beer a lot, it would be a stretch to call this one Juicy.

On tap at the Montana Ale Works in Bozeman, MT. Pours a deep amber with a thin off-white head. Initial impression is juicy citrus: grapefruit, orange, and mango, nicely balanced by caramel malts. Mouthfeel is on the sticky side of medium; carbonation is perfect. Finish is sticky with a slight lingering bitterness. Overall, I would consider this an exceptional DIPA. Kudos to Madison River!

S: Some maltyness, faint citrus, only real letdown with this beer

T: Grapefruit & breadyness, plus dryness up front, a little woody bitterness as well. Cakeyness, citrus bitterness, some dryness as this warms, a touch of orange juice as well. Finishes with a little woody dryness, grapefruit, OJ in moderate amounts & just a little breadyness

Drinks easy for the heft, not super juicy, but a solid DIPA that I would never say no to...

Now called 'The Juice'. Edit needed. Bottle dated 070816... yes thank goodness Madison River started dating bottles. Definitely an 'English style' malt driven double IPA with a pronounced bready sweetness. The 9% packs a whollup and is really disguised well. This is how Montana wants their beers, tasting like 'beer' with a hop/malt balance and smooth sweetness. Really a great brew but nothing special for the whale seekers... I could and have gotten destroyed quick on 90+ degree day backyard bbq's on this and will in the future also for under $10 a six pack.

Had from the bottle 04/15/16 at Copper Horse in the Bozeman, MT airport. No bottling date found

Appearance - Poured into a pint, the brew is clear with a subdued golden orange color. Sandstone, half-finger width head that dissipates fairly quick, leaving a thin, mostly solid layer of suds across the top. Lacing consists mostly of spots found around the glass.

Taste - Follows the nose. Soapy character with mild citrus bitterness. A touch of grapefruit pith in the finish.

Mouthfeel - Near full in body with moderate carbonation. Fairly smooth and drinkable, with a mostly dry finish.

Overall - Meh. I've found what I describe as a soapy character in a few select pales I've had, but never in a DIPA. Not a completely terrible beer, but I wouldn't want to drink it again.

Despite the American style hops, I would describe this as a double English IPA. The maltiness body has some nice caramel and nut notes. The hops are citrusy. Nice mouthfeel.

Poured from bottle into a snifter

Appearance – The beer pours a clear red tinted orange amber color with a one finger head of foam. The head fades over a moderate level of time to leave a decent level of streaky lace on the sides of the glass.

Smell- The aroma of the brew is heaviest of a sweeter fruity aroma being mainly of a melon and tangerine smell. Along with these smells comes some hoppy aromas being mostly a mix of grapefruit and an earthy smell, but also containing a faint floral hop aroma as well. With a bit of a musty smell and a bit of bread, a rather sweet and intriguing aroma is overall produced.

Taste – The taste starts with a bready and sweeter fruit flavor with a nice tangerine sweetness upfront. Other sweeter flavors of caramel are upfront as well, being mixed with a good showing of a grapefruit hop. The grapefruit grows stronger in nature as the taste moves on to the end, being accompanied by some herbal and initially lighter pine hop tastes. While the grapefruit is the strongest at the end, the pine does get to a more moderate strength overall. Some slightly musty and a moderately melon taste comes more toward the end of the taste. With a loss of the caramel sweetness and a bit of a dwindling of the tangerine, one is left with a decently hopped, and still smooth and still rather fruity sweet flavor to linger on the tongue.

Mouthfeel – The body of the beer is on the rather more syrupy side with a carbonation level that is on the slightly lower side. For the melon fruity flavors and the hoppy tastes the syrupy body is actually quite nice accentuating the hop and creating a sorta chewy feel for the melon. The thickness coupled with the lower carbonation level of the brew, makes of a nice slow sipping style overall.

Overall – This was a very enjoyable double IPA overall. Not the standard citrus bomb that you often get; this one has nice blends of other fruity flavors and a nice blend of hops. Quite enjoyable overall.

The Juice from Madison River Brewing Company
Beer rating: 85 out of 100 with 73 ratings