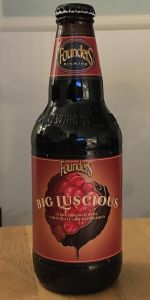 A rich and robust stout serves as the foundation for this decadent dessert beer. Raspberries lend a tart and refreshing sweetness while the addition of dark chocolate takes it to an indulgent level. Big, yet balanced, Big Luscious is perfect for sharing with friends and family. Or you can keep it all to yourself. We won’t tell.

Had this beer 6 or 7 years ago from a bottle and it was such a sugar bomb I didn't review it. A crowler this time around...let's see where this takes us...

It's back and way better...

Seems like a different beer....tart...sweet...full of dark rich cocoa flavor...

This beer is so tasty I feel I'm on Candid Camera....

Overload to the senses...amazing this time around....

A: Poured from the bottle into a tulip glass. Body is motor-oil black with a chocolate, 1.5-finger head. Leaves behind sheets of brown lace.

T: Tastes better than it smells, especially after a couple sips and the palate adjusts: raspberry syrup with a touch of chocolate. Think that Raspberry Creme chocolate candy you get in the Whitman's Sampler every year for Christmas. Finishes with modest tartness.

M: Not at all like an Imperial or Double Stout - it's just not heavy or thick enough in heft. Don't get me wrong, I think the heft is there, but it doesn't "feel" like it - due to the raspberry tartness, which gives an impression of lightness.

O: Not bad, not great. Price was reasonable, and I probably won't have a hard time drinking through this 4-pack this holiday season, but unlike the Founders imperial stouts that I tend to absolutely LOVE, I only "like" this one.

Pours black. Nice thick brown head. Lots of lacing. BIG raspberry aroma. Dark chocolate behind. Smells like one of those raspberry chocolates you get in a chocolate box after biting into it. Tastes just like it too. Enjoyable raspberry tartness blends well with deep dark chocolate flavor. Feel is medium bodied. Medium carbonation. Overall a tasty beer. Especially for those who love the taste of raspberry.

A finger and a half worth of dense lush light mocha colored head... Rock solid retention... Ink black color... True to the promise the nose is of chocolate covered strawberry... The raspberry intensifies in the palate and the chocolate isn't anywhere to be found... Sweet with limited traditional stout qualities... Sleek and in the lighter side of full bodied... Teally enjoyable and well executed...

Big Luscious has a very thick, tan head, a dark brown appearance, with lots of lacing and unusual cream-colored chunks, settling at the bottom. The aroma is of dark bread crust, with hints of citrus juice. In the flavor, raspberry takes the lead, with dark-roasted malt (burnt, really) coming in, second. Big Luscious has a thick body and finishes midway sweet to dry. I was somewhat put off by the heavy char or burnt aspects.

Aroma strongly of raspberries, with some malts and chocolate in the background.

On tasting, the raspberries dominate. As it warms, the chocolate notes come into play. There is also a decent but not harsh roast.

Overall, an enjoyable beer. Not sure I would call it "big", but it's certainly luscious.

I like this one. Should be stronger for what it is, but it works. I think what probably throws people off is the strong initial raspberry flavor. This fades as you drink to a nice chocolaty balance. Slight hint of coffee really makes this one special. I've yet to try a Founder's brew I didn't like. Top brewery in the country IMHO.

As a kid my favorite chocolate from the
Whitman’s Sampler was the raspberry cream. This tasted like that.

Bought a single $3.99 Village Bottle Shop
44 days old
Smell of raspberries, chocolate, coffee
Dark block color
Heavy mouthfeel
Medium carbonation
Taste of really sweet raspberries dominate, followed by some chocolate flavors
Overall this delivers on what it says it is, but not well balanced. I prefer the stout flavors be dominate and accentuated with other flavors so this isn't really for me.

Black appearance with ample brown foam and lacing. Aroma is raspberry and chocolate, portending what is to come. Tastes exactly as billed. Sweet raspberry with a chocolate background that is a bit more pronounced on the finish. The raspberry is fairly strong, but not intolerable. Kind of fun as a change of pace or an after dinner beer.

This one is a pig with lipstick. On the pour it looked all hella velvety, and then in the aroma it was pretty sweet like a Mormon girl before her man goes on a mission... But the taste! Woo ha! It’s just sweet on sweet! Too sweet. Like, I like pigs n all, but this one is a lil too wild like a boar before being neutered.

fountainofyouth from District of Columbia

I'm a simple man: I see a Founders stout, I purchase. Poured into a pint glass.

Taste: Very strong raspberry up front and even lingering throughout. Layered underneath is semisweet chocolate and medium-roast coffee. It is sweet but not cloying, with just enough roast to balance the sweet berries.

Overall: A fine dessert stout, satisfying and not too decadent.

Founders Big Luscious Stout, 7.8% ABV. Pours thick and black, with a 3+ finger brown head that left some lacing. Nose is raspberry and light chocolate. Taste follows, more sweet than bitter, slightly tart. Excellent mouthfeel, thick with decent carbonation. Overall outstanding. Could use a little more chocolate, but they sure nailed the raspberry.

Taste: Mild sweetness, lots of raspberries, a little bit of dark chocolate. Medium-to-light feel, especially for almost 8%. Plenty of raspberry in the finish and some more chocolate very late.

Overall: Pleasantly surprised by this beer! I'm usually a "keep that fruit out of my beer" guy, but this was done well. Plenty of raspberry flavor without being too crazy, enough chocolate malt to balance it out, not too light or too heavy. Good stuff.

Pours black with a big, thick brown head that collapses clumpily. It's a very pretty beer. Smell is surprisingly strong raspberry, mild chocolate. I do get a little roast characteristic.

Taste is raspberry and bitter chocolate forward, a little juiciness without being too sweet, bittersweet finish. Roast characteristic comes across fairly gently, almost a whiff of smoke.

Mouthfeel is medium bordering on thin. Overall, I think this is really nice.

Pours a pitch black with a heaping head of tan foam.

Big notes of raspberries and roasted malt and chocolate in the smell. The fruitiness is number one. 7.8% abv not a factor.

It's going to be a joy drinking the other 3 bottles.


The taste doesn't deviate from the smell other than the chocolate is more pronounced than the roasted malt. Nice bit of sweetness to go with the light raspberry tartness.

Oh this is sweet treat, for sure for people who love sweets and raspberry (my favorite berry - the wild ones...) I wish it were more bitter... Well made beer.

Poured from a bottle into a pint glass
Appearance – The beer pours a pitch-black color with a one finger head of puffy brown foam. The head has a fantastic level of retention, very slowly fading over time to leave tons of foamy lace on the sides of the glass.
Smell – The aroma of the brew is super big of cocoa and raspberry with notes of coffee and roasted malt. Overall, it smells like a chocolate covered raspberry.
Taste – The taste begins with a cocoa dark chocolate flavor that has a rather strong taste of raspberry and some toasted brown bread. As the taste advances the raspberry gets stronger and sweeter and is joined by some other sweet tastes of brown sugar. THE dark chocolate taste takes on more notes of milk chocolate and with a hint of woodiness, one is left with a sweet chocolate covered raspberry taste to linger on the tongue.
Mouthfeel – The body of the brew is medium in thickness and creaminess with a carbonation level that is on the lower side. For the dark and sweet dessert nature of the brew the feel is great and makes for a nice slow dessert sipper.
Overall – Very rich and dessert like brew. A little to sweet for anything but a dessert style brew, but a very good cap to the end of a holiday meal.

Appearance: The body is black and it has a short but thick-looking khaki head. It fades slowly to a thick ring.

Aroma: There is a light raspberry aroma that appears right as the nose approaches the surface. There is a light note of cocoa and coffee in the background, along with a burnt wood or carbon scent.

Taste; Up front there is a flavor of raspberry, and this flavor carries throughout from start to finish. The flavor is very neutral, not being sweet or sour. The middle of the palate (in addition to the raspberry) has a light chocolate flavor. It finishes with a light carbon that bitters the end as the raspberry fades from the palate.

Mouthfeel: It is very smooth and it has a full body with a pleasant texture. There is a light earthy bitterness to the beer.

Overall: It's a very enjoyable beer. The label states that this is "BREWED WITH CHOCOLATE AND RASPBERRIES" and it does a good job of delivering both. The fruit character tastes as if it is made with real fruit and the chocolate, while not rich, is present and has a nice earthy character. The highlights of the beer are the raspberry flavor and the texture. Id recommend it and I would drink it again.

taste is silky smooth chocolate and caramel malt with a bright and prickly burst of lush, tart raspberry. a slight earthy bitterness tangles in with the funkier notes and brings a balance to what would otherwise be a sweet-as-sin decadence dive.

mouthfeel is moderately carbonated with a heavy body; silky smooth ride with an earthy slightly dry finish that kicks in at the last possible second.

overall:
great experience. I love how well balanced and blended this brew is across the board and manages to introduce a lush funk in such an enjoyable way. this may turn a few people away, but I'd wager that it's a pretty easy concept to imagine how raspberry may impact a traditional chocolate stout experience, and that those who don't like raspberry outright would be able to follow their inner judgement and not invest in this brew. for those on the fence: this is much closer to a raspberry jelly tart than the plucky berry as it is found in nature. what remains is something in the same ballpark as a coffee bean addition to chocolate, with clear familial lines within the "dark stone fruit" flavor spectrum. however, it is a tad brighter, a bit more lush than that in its delivery, but it does have a tart funk that stands out on its own. for me, this is taken in as a solid compliment to the milk chocolate malt bomb that is the base brew.


Big Luscious from Founders Brewing Company
Beer rating: 89 out of 100 with 1546 ratings