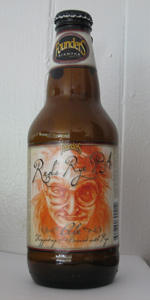 Pours a nice copper color with a sustaining off-white head. Smells like a basket full of dry rye and grains with a bunch of flowers spread on top. Citrus notes play on top of it and near the end as well. I'm also getting some biscuity tones, too, possibly from the yeast, heavy in the background. The taste is a nice mix of toasted rye and hops. The hops explode in the form of pine resin about halfway into the sip and the slight grapefruit-citrus hints leave a nice flavor on the tongue, too. The rye and malt flavor balances the hops and slight citrus sweetness very well - an acute dry, bread-like flavor to play alongside a bitter, piney, hop gash. As the beer warms up (especially near the end), the caramel toasted malt really starts to become pronounced. Medium mouth feel, slightly dry finish; a good amount of carbonation makes this beer very enjoyable to drink.

A nicely balanced beer with a nice touch of rye and hops. The rye adds a nice element of dryness that works extremely well with the citrus. A good red, a good IPA, and a good rye beer.

I've tried this beer twice now, once on tap at the brewery in Grand Rapids, MI; and once out of the bottle, back home in NC. I fell in love with the one on tap.

The beer pours a brilliant ruby red, which isn't too surprising given its name. The creamy off-white head accentuates the red beer underneath. And it stays there throughout your beer experience.

Wow...the aroma! Grapefruit and more grapefruit, followed by hints of malt and the malty sweetness. What an inviting aroma, and what made it better was that it was unexpected. I didn't know what I'd get for aroma with a rye beer.

The flavor matches the aroma with the grapefruit/citrusy notes. (These are BIG notes!) But there is a malt presence, especially as it warms some...but mine was gone before I could let it warm too much.

A medium "plus" mouthfeel. There is some chewiness to this beer. You know that you're not drinking a 4.5% beer!

Overall a real winner. Try it over the July 4th weekend as part of your RED, White and Blue theme.

(If I were rating the bottled version, it would still be 4-plus; but if you can get this on tap, do it!!)

Reviewed from notes. Poured from 12 oz. bottle into pint glass.

A: Reddish brown, a bit darker than I expected, with some haze and a bit of visible carbonation. A flat brown head forms, but regresses fairly quickly.

O: This is different & tasty! Another good beer from Founders. Glad I have one more!

Pours a very hazy dark copper bordering on brown, with a nice, rocky off-white head that eventually fades into a creamy cap.

Nose is floral, citrus and spicy pine notes, a bit of sweet rye.

Taste is sweet up front - lots of spicy rye, slightly toasty, rich, bit of caramel underneath the rye, with a spicy, resiny hop note that sits lightly on top of the malt without dominating, until it really comes out to shine right before the finish. Finish is long, lightly bitter, but with the spicy rye hanging around as well.

Mouthfeel is creamy, just enough carbonation bite to let you know it's there, medium-full body. Very nice beer, and one I could drink for an entire chilly night.

Poured into Turbinator with about 1.5 years on the bottle. Aging has considerably helped IMO.

A: Deep ruddy with frothy white 1 finger head. 1/2 finger stays all the way through. semi-lively carbonation.

S: Definitely a malty and spicy rye. The hops are mild and are not interfering with the rye.

O: I want more...so smooth, velvety, spicy, dry, all the notes I like in rye whisky but toned down a bit.

Pours a Beautiful crimson red with a creamy tan head. Nicely balanced with its hop bitterness and floral bouquet achieved from the dry hop. In the finish, the generous amount of malted rye used gives it a spicy crisp finish. This is better a little warmer, flavor bursts when around 46 deg. It's not a cloying rye, and the body is lighter than I though it would be...and not in a bad way. Drinkable, maybe not quite a session beer but I think I'll have another.

S- hops, and more and more hops. Followed by a peppery smell with rye.

T- taste is hop front and a strong pepper hop finish. The middle is a wet rye bomb.

O- it's alright. maybe rye beers aren't my thing. it's ok, won't drink it again though

S: A bit of herbal hop and a bunch of biscuity malt. Maybe some spicy rye in there but it's very faint.

T: Herbal hop flavor up front that turns into ...rye bread. The malt and the rye mixed together to complete a pretty decent impersonation of rye bread. Spicy rye carries through to the aftertaste along with the herbal hops. Nice.

O: It's hard to classify this purely as a rye beer. It tastes more like someone mixed an APA and a rye beer together. Rye is a bit subdued compared to some rye beers (Sixpoint Righteous for example) but hops are more prevalent and this is also surprisingly light.

I gave this beer extra points in the overall category because while it's not particularly amazing in any one way, the combination really shines. Not too much spicy rye, not a hop bomb IPA. Not too wussy but not too heavy. Just all around well balanced and tasty. Sometimes it's hard to find good beers that aren't "extreme" in one way or another.

12oz. bottle into a pint glass

a-dark red, nice whitish 2 finger head, almost dark brown right under the head
s-very citrusey and spicey
t- very hoppy and dry and bitter and spicey from the middle to the end of the drink
m-very lively and and light
d- drinkable but not too many for me

fitz284 from District of Columbia

Poured from a 12oz bottle. Dark amber/copper with a generous tan head that hangs around for 5+ minutes leaving a lumpy film on the top with nice lacing.

Smells strongly of floral citrusy hops. I'm reminded of Bell's Two Hearted and Sierra Nevada's Celebration. I like it, but was expecting more rye in the nose.

As in the nose, hops dominate. Still wanting more rye. There's some there, but you really have to search for it over a few sips. Very dry finish.

Nice full mouthfeel. Almost weighted like a good stout. Not a lot of carbonation, but the rush of hops takes its place.

This is a very tasty and drinkable beer. It lacks the presence of rye I was looking for in both taste and aroma, unlike the Black Rye, but its still damn tasty.

Pours a very nice orange/red color. I intentionally limited the head because I know the head can build quickly on this one. The lacing is think and resilient.

The smell is incredible. It smells like a cross between an IPA and a barleywine. The taste confirms this. Sufficient bitterness to satisfy the most demanding hophead with a satisfying degree of sweetness that balances well with the hoppiness and is not overdone like some brews tend to do. Hints of grapefruit. The aftertaste lingers for quite some time. So satisfying.

Bottom line: This is one of my favorite beers. Enough hoppiness and at a reasonable price. Buy a six pack.