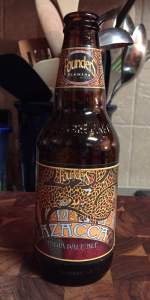 Notes: Named for the Haitian god of agriculture, the Azacca hop boasts intense, tropical fruit notes. Azacca IPA includes a touch of caramel malt to provide a sweet backbone to the citrus, mango and orchard fruit notes in this 7% ABV, 70 IBUs beer. The label artwork symbolizes the god of agriculture watching over a field where the ingredients used to make the beer are being grown.
View: More Beers | Place Reviews
Recent ratings and reviews. | Log in to view more ratings + sorting options.
Rated: 4 by bismarksays from Iowa

Reviewed by feloniousmonk from Minnesota

In the mouth: Malty mouthfeel dominates the senses first. Lush and delicious. Hops take over the spotlight soon, flashing brilliant citric notes. Delicious and deliriously drinkable. Bright and lovely, with lots of yeast action still happening. A good drinking IPA, and it tastes good, too. Cheers to that!

Rated by JasonQKing from Texas

One of THE best APA

Palate is just perfectly balanced and very layered, velvety texture wtith great body and mouthfeel without being dense or heavy in any way. Initial hoppy bitterness moving into more rich fruit notes, golden delicious apples as well as the pineapple and banana notes form a nice fruit salad flavour. There is some herbal and pine bitterness on the finish, but does not feel as 70 IBU's at all.

A: Mildly hazy gold with a finger’s worth of off-white head that has average retention. A good amount of visible carbonation.

T: Bitter citrus, grassy, and a bit brassy. Biscuit malt sweetness. Some tangerines and melon as well. This comes off as closer to balanced than expected. Moderate bitterness in the hang.

O: A medium body for style, with low alcohol presence. A good amount of carbonation sensation.

O: Not a great beer. I'm not certain if I've had Azacca hops before this. I do think this could have used some additional dry hopping, but otherwise to specific faults. But there's nothing to get excited about, nor anything particularly memorable.

Reviewed by hogrider from Florida

Reviewed by brewale4me from Pennsylvania

The caramel malt sweetness carriers over to the palate and is the first flavor on the tip of the tongue, but as the brew crosses over to the mid palate the hops arrive in fruity fashion. However, those fruits are a little muddled. Citrus, tropical, and white stone fruit flavors are all there but are difficult to really pick out. Grapefruit, pineapple, and apricot might be separated and discerned, but not to any strong degree. As the brew finishes, the danker flavors arrive, more dank and weedy than resiny/piney. The booze detected on the nose isn't really present on the palate. The balance of malt and bitterness is very well done, however.

The brew is essentially down the middle medium in body, relatively light on carbonation compared with its appearance, and fairly drinkable.

The IPA market is crowded and this one doesn't do much to distinguish itself, other than providing as "balanced" a delivery as any IPA I've had. It does have plenty of enjoyable malt presence offset by a bitter, but not hop-burned, IBU presence. If the fruit flavors were more discernable as "fruits" rather than "categories" of fruitiness, this would be a higher rater for me. Still, a good brew.

Rated by gobrewsome from Alabama

Reviewed by RoyalT from Michigan

Smell – This is a beautifully balance hop profile with equal parts citrus, pine, and grapefruit. There’s a small malt backbone here as well but the hops steal the show.

Taste – The malts come on much bigger at the taste. There is some good caramel in there to go along with the hops that taste as they smell. This is an exceptionally balanced IPA.

Mouthfeel – This just is medium-bodied with some bitterness but not enough to be off-putting.

Drinkability – This is a big beer but not too big for the average drinker. It’s definitely one of the better, more quaffable big IPAs that I’ve ever had.